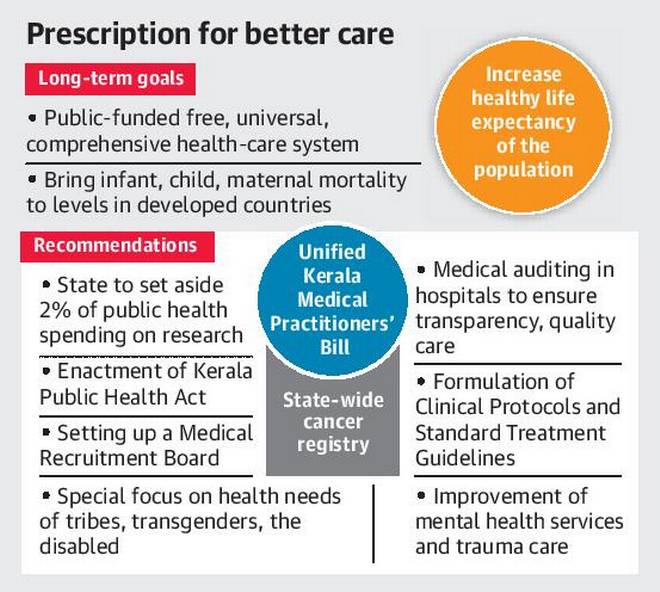 Kerala’s new health policy focusses on improving and equipping the public health system to deliver affordable, accessible and quality care to the public at primary, secondary and tertiary levels so as to bring down the huge out-of-pocket (OOP) expenditure on health in the State.

It lays accent not just on increasing human resource (HR) in health but also improving the quality of HR and steadily increasing the investment in public health on one hand, while at the same time aggressively reducing disease prevalence, morbidity and mortality amongst the population.

The government will thus aim at raising its current expenditure on health from the current 0.6% of the Gross State Domestic Product to at least 5% and strive at increasing it by 1% every year.

The draft of the new policy, brought out by a 17-member committee of doctors and public health experts, with B. Ekbal, member of the State Planning Board, as chairperson, and K. P. Aravindan, public health activist, as convener, was approved by the Cabinet on Tuesday.

Addressing a news conference, Health Minister K.K. Shylaja said that one of the main recommendations of the policy, of focussing on developing a comprehensive primary care system and introducing the concept of family doctor through PHCs, was already being implemented by the government through the Aardram Mission.

Another major recommendation in the policy, that of regulating the private sector through a Clinical Establishments Bill had also been initiated by the Government

The policy recommends that a three-tier policy be followed in the health system, maintaining medical college hospitals strictly as referral centres. It also advocates “better organic linkages” between medical colleges and health services hospitals. It recommends the division of the Health Department into two streams, Director General of Health (Modern Medicine) and Director General Health (Ayush) and the setting up of three directorates – Public Health, Clinical Services and Medical Education – under the DGH (MM).

A Public Health Cadre will be created in the Health Services by including doctors who have qualifications in public health. A multidisciplinary working group will be constituted to estimate the State’s requirement of human resource in health for the next 25 years and to prepare a roadmap to achieve the target.

No new institution will be established in the government or private sector without assessment of needs and formulation of an HR policy for the health sector.

The policy recommends that full functional autonomy be given to government medical colleges to improve the functional efficiency of these institutions.

India - Schools of Dishonour
Gujarat - separate anganwadis for Dalit children #WTFnews
SC - Why not BAN gau rakshaks ?
India - Hadiya has the right to love and marry whoever she wants