Kerala: Ambulance driver covered 516 kms in 7 hour to save a baby’s life #Goodnews

A Kerala ambulance driver transporting an ailing month-old infant accomplished the impossible this week, racing from Kannur to Thiruvananthapuram in under seven hours, completing a journey that normally takes 14 hours. Thamim, the ambulance driver who transported an ailing month-old baby from Kannur to Thiruvananthapuram

On Wednesday night, Kerala saw an impossible feat getting accomplished, a feat that makes for a tale to warm the coldest of hearts.

That night, with the life of a month-old child hanging in balance, an ambulance raced across nearly the entire length of the coastal state, covering a distance of 516 kilometres between the northern city of Kannur and Kerala’s capital, Thiruvananthapuram.

With light traffic, travelling that distance by road, according to Google Maps, would take a minimum of 13 hours. Factor in the everyday congestion on Kerala’s narrow roads, and the trip would realistically take at least 14 hours.

The ambulance, however, completed the journey in 7 hours. Discounting the 15-minute break the emergency vehicle and its convoy took, the running trip time came to 6 hours and 45 minutes. That is an average speed of 76.4 kmph.

At the ambulance’s wheel was Thamim, who hails from the coastal town of Kasaragod. On Wednesday night, Thamim was called in to work at the Pariyaaram Medical College in Kannur.

There he was given a mission: He was to transport a 31-day-old infant, Fathima Labia, from the Kannur facility to the SRI Chithra Mission Hospital in Thiruvananthapuram.

Fathima had to be transported to the hospital in the state capital as quickly as possible as she needed to undergo an emergency heart surgery after developing prolonged breathlessness earlier this week.

She couldn’t be air-lifted as the nearest airports (Mangalore or Calicut) were three hours away, while arranging an air ambulance would require at least five hours. So, it was decided, the baby would be transported from Kannur to Thiruvananthapuram by road.

What followed next resembled scenes straight out of the popular Malayalam movie ‘Traffic’. As Thamim signed up for the assignment, Kerala Police rose to the occasion, finalising plans to ensure a hassle- and obstacle-free journey for the ambulance.

The first official to get involved was the Kannur district police chief, who deployed a special team to coordinate the entire journey, another one to accompany the ambulance and one more to regulate traffic on the roads Thamim’s vehicle would race by.

And, it was not just the state police. As word of the journey got out, members of the Child Protection Team Kerala (CPT), a non-profit organisation, joined hands with the police in order to coordinate the journey.

And so, at 8.23 pm on Wednesday, Thamim turned on the sirens of his ambulance and pressed the gas pedal as he embarked on the 516-km journey to Thiruvananthapuram.

With the help of the CPT, news of the ambulance’s journey spread on social media and people lined up on roads to catch glimpses of the vehicle screaming by with its sirens wailing. Twitter is filled with videos shot on phones showing the ambulance and its convoy racing towards the state capital.

Traffic Police controlling the vehicles and the crowd at a Junction in Thrissur as the Ambulance and Police Jeep passes through.

The ambulance was accompanied by at least two SUVs of the Kerala Police. The SUVs kept changing at district borders in smooth changeovers that ensured Thamim did not have to slow down.

At around 11.00 pm, the convoy entered a fuel station in Kakadu in Kozhikode, making its only stop on the journey.

Finally, at 3.23 am Thursday, the ambulance came to a halt at the casualty ward of Sree Uthradam Thriunnal Hospital in Thiruvananthapuram where waiting doctors and medical staff rushed the toddler inside. 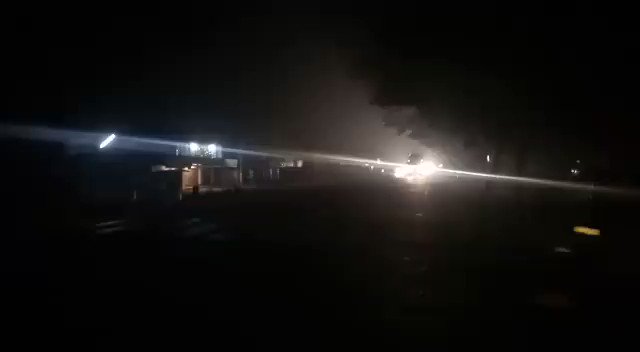 The Ambulance passing through Kollam City with Police Escort (02:25am)

Speaking to India Today soon after the arduous trip, Thamim was yet to get over the shock of what he had just accomplished.

Praising the state police and the CPT, Thamim said the successful journey would not have been possible without the officials’ and organisation’s help and support. “I could (mostly) stay in 100-120 (kmph) range thanks to (the) well-coordinated efforts by (the) teams,” Thamim said.

As for the entire purpose of the trip, while Fathima successfully reached the Thiruvananthapuram hospital in likely record time, her condition remains critical.