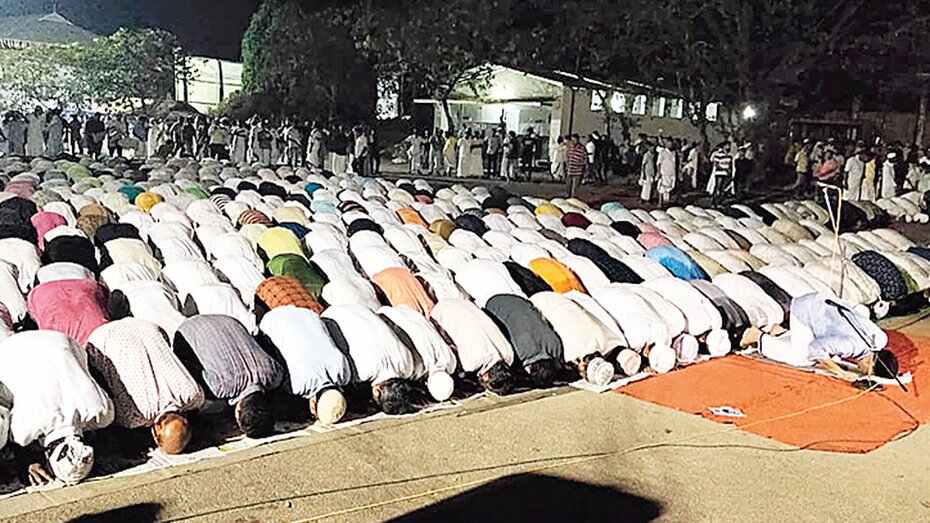 Kerala church allowed hundreds of Muslims to pray on its premises on Saturday, earning tributes for setting an example in communal amity amid the divisive citizenship controversy.

A group of protesters against the Citizenship (Amendment) Act and the proposed National Register of Citizens had marched the 10km from Muvattupuzha to Kothamangalam, in Ernakulam district, when the Muslims among them realised it was close to the evening prayer time.

There was no mosque nearby. So, one of the march leaders contacted the vicar of the Marthoma Cheriapally, a local church, who immediately made arrangements for the prayers, one of the marchers told The Telegraph on Sunday.

“Not only did the church allow our Muslim brothers to pray within the premises, they also made arrangements for ablutions — a must before praying,” Mathew Kuzhalnadan, state president of the All India Professional Congress, a Congress arm that was one of the organisers of the march, said.

After the prayers, all the marchers made a tour of the church, which is said to be at least 1,000 years old.

The picture and short video of hundreds of Muslims offering namaz at a church in Kerala has become a point of discussion online in light of the protests against the Citizenship Amendment Act (CAA) passed by the Union government. The Muslims were taking part in a protest march in Kothamangalam and needed a space to offer their prayers when the march ended. The St Thomas Church, popularly known as Marthoma Cheriapally in Kothamangalam, opened its doors to the Muslims, says Mathew Kuzhalnadan, state president of the All India Professionals Congress that conducted the march against the CAA and the National Registry of Citizens (NRC).

“In times like this when people are being segregated on communal lines, this is an example of communal amity for the entire nation to understand and follow,” Kuzhalnadan said.

The vicar, Father Jose Parathuvayalil, could not hide his joy at being able to help.

“We are always there to help anyone irrespective of their religion, as this is a church with a long history of communal amity,” he told this newspaper.

“This church is founded on communal amity. It’s a person from a particular Hindu family from here who holds the lamp to lead our church processions.”

He said this was a practice the church had followed for centuries.

According to lore, when Saint Eldhos Mar Baselios arrived from Antioch (in modern-day Turkey), a man from the same Hindu family had guided him to a small stone cross in the locality. The church was built on the site, where the cross still stands.

Islamic scholar and youth leader Sayyid Munavar Ali Shihab Thangal, who led the prayers on the church premises, wrote on Facebook: “When we reached (Kothamangalam), we were received by the ringing of temple bells and azan. The arrangements for prayers were made at the Cheriapally (church).”

He added: “It was the father (vicar) of the church who poured water for the ablutions. When we left the church after the prayer, the priest’s sense of satisfaction was visible.”

It’s common practice for local Hindus to pray at the church during Christian festivals or after family events such as the birth of a child or a member passing an exam.

That has been the practice of the church for centuries, says the church priest Father Jose Parathuvayalil. According to the church’s webpage, it was established with a Cross in 1455. Later a small church was erected in its place in 1504.

“For 600 years now, the church has always been a pilgrim centre for people of all religions. Muslims and Hindus come here for many programmes. People of all faiths come to where the Saint Baselios Yeldho is buried. When there was a request to permit Muslims who took part in the secular march to offer prayers, the church’s compound was arranged for them,” says Fr Jose.

“The march was held to strengthen the idea of secularism. And what happened at its culmination sent a great message of secularism,” says Mathew

Kerala has earlier too witnessed statements of communal amity being made amid the citizenship crisis of the past few weeks.

On December 23, the St Thomas Mar Thoma Church in Kozhenchery, Pathanamthitta, had arranged a choir with the singers dressed in traditional Muslim attire.

The choir sang one of the songs in the traditional Muslim style of Mappilapattu.

After last year’s floods in Kerala, Muslims had helped clean the slush-filled temples; churches had opened their doors for Muslims to pray; and mosques had fed thousands of the marooned and displaced irrespective of their religion.Tags

Proof that the nuclear industry has been dodging its responsibilities for over 50 years
April 1968: The Black Rebellion That Shook America And The World
Women Organisation seeks apology from #SatyamevJayate on Fudging Facts #Vaw
Haryana Governor- intervene to prevent violence and repression in Kaithal