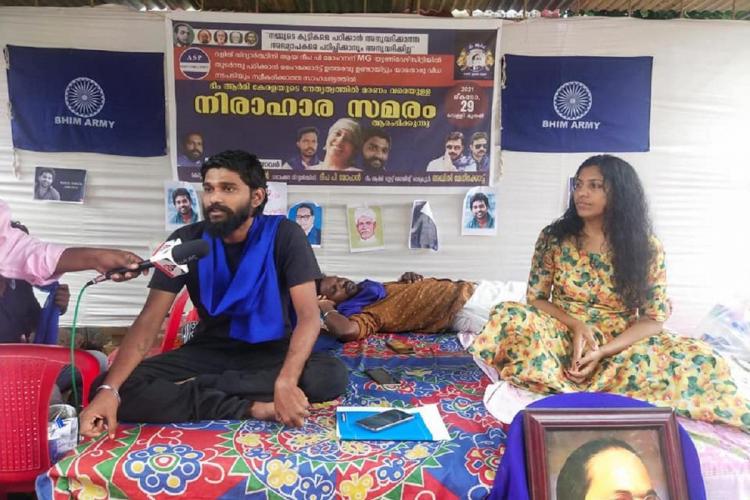 Deepa is developing wound-healing scaffolds using nanoparticles. But apparently, her service to science and medicine is no match for her professor’s service to the caste system.PHOTO : BHIM ARMY KERALA FACEBOOK PAG NOVEMBER 03, 2021 – Haritha John

Deepa P Mohanan is a scientist — a PhD scholar who is building wound-healing scaffolds using nanoparticles to advance the field of nanomedicine, and help people who have been injured. She is a 36-year-old woman who finished her MPhil after giving birth to a child, and is pursuing a STEM PhD. But a career in science and technology hasn’t helped her escape caste discrimination — in fact, her success seems to have inspired more casteist assaults on her work and dignity. For five days now, Deepa has been on a hunger strike outside the International and Inter University Centre for Nanoscience and Nanotechnology (IIUCNN) at Mahatma Gandhi University in Kottayam in Kerala, because for the last 10 years, her progress in her education is being scuttled by the director of the institute — Nandakumar Kalarickal. All because she’s a Dalit, she says.

Deepa joined MG University (MGU) in 2011 for her MPhil, after finishing her masters in medical microbiology. And since her first year at the university, Nandakumar Kalarickal has been obstructing her education, she says. The list of allegations against Nandakumar — who was a joint director when Deepa started studying at the institute and is now the director at IIUCNN — is long. According to Deepa, he has stoppes her from accessing the lab, accessing chemicals and polymers at the lab, has denied her seating at the workplace, has worked to block her stipend and has locked her alone inside the lab on one instance. Deepa has also alleged that he has been rude and abusive towards her, the only Dalit scholar in her batch, and has generally done everything in his power to ensure Deepa doesn’t get her PhD on time.

“I already have an MPhil, and could ideally have finished my PhD by 2015,” Deepa, who is currently too weak to speak to the media due to her hunger strike, had told TNM in an earlier interview. But 2021 is coming to an end, and Deepa is still struggling. “I have done the synthesis for my nanomedicine project, I have developed a scaffold and optimised it. But I still haven’t been able to finish my PhD because of Nandakumar,” she had said.

Since October 29, Deepa has been on a hunger strike demanding three things: that her research guide be changed; that she be provided with materials to complete her research, like all other PhD scholars are; and that Nandakumar Kalarickal be removed from the institute. On November 1, the university called her for a compromise meeting, where they agreed to meet her other two demands, but refused to remove Nandakumar from IIUCNN. Vice Chancellor Sabu Thomas told the media that he would take charge as Deepa’s interim guide instead of Dr Radhakrishnan Ek, and will select another one guide of Deepa’s choice. He said that removing Nandakumar was not possible due to some technical reasons.

But Deepa is firm on her demand that he should be removed from the centre, or she won’t end her hunger strike. “Whatever facilities are allowed by the university, if Nandakumar is there in the centre, I will not be able to finish my research. This is what my previous experiences prove,” Deepa said on November 2, “He wants revenge.”

But nothing changed even after that. She was even detained by the police and kept in a station for two days when she tried to meet the Governor to give her complaint. And the reason, Deepa has alleged in the past, is because Nandakumar is close to top CPI(M) leaders in Kerala. This is why, she has said, unions like Students Federation of India (SFI) — which is the student wing of CPI(M) — have not supported her.

“He took more revenge against me after the case under SC/ST Act was filed against him. He has given letters to the university many times to dismiss me from IIUCN. It is he who decides everything at the centre. Since the VC is protecting him, I am continuing my hunger strike,” Deepa said on November 2.

“I am a person who takes tablets for anemia and I also have a congenital VSD (ventricular septal defect),” Deepa wrote in an open letter she posted on her Facebook wall on October 31. “So if I lose my life in this hunger strike, the people responsible for this will be Nandkumar Kalarikal, VC Sabu Thomas, research guide Dr Radhakrishnan EK and this government. I understand in this situation why Rohit Vemula killed himself. But I cannot move back from the protest without fighting for justice. I should fight for my people. I should win here for many who lost.”

“Bhim Army kerala is taking over the struggle of Deepa P Mohanan, who has not been able to complete her research since last 10 years at Kottayam MG University due to caste discrimination. Bhim army will never let the manuvadi culprits to teach over any students,” Bhim Army Kerala tweeted.

The SFI or Kerala Students Union (KSU) meanwhile have not extended any support to her yet.

In 2016 TNM had reported on the discrimination Deepa face her in university. “Last April (April 2015), when I complained about my plight to the university’s Pro Vice Chancellor Sheena Shukkoor, she told me that Nandakumar had told her that Dalit students should not be encouraged, in order to keep discipline intact. That is when I realised then that my caste was at fault,” Deepa had told TNM in 2016.

Five years later, it seems, she is still being punished for her caste while her alleged harasser is enjoying institutional protection.