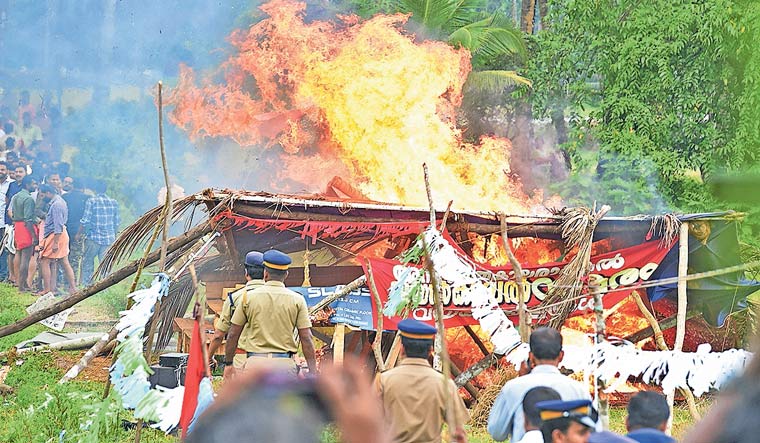 A few ‘birds’ in a paddy field in the red bastion of Kannur district are giving sleepless nights to the ruling CPI(M). While some say these birds in Keezhattoor village are harbingers of Kerala’s ‘Nandigram’—the village that launched massive protests that ensured the CPI(M) was almost eliminated from West Bengal—the Left is struggling to find ways to deal with its own ghosts from the past.

Vayalkilikal, meaning birds in a paddy field is the name by which a group of farmers protesting against land acquisition for a NH bypass call themselves. Though few in numbers, the protesting group—comprising farmers and farm labourers—are determined to go to any length to stop their paddy fields from being reclaimed.

“Till we are alive, we will not let the road pass through our paddy fields. It will destroy the entire area,” asserted Janaki, one of the leading faces of the agitation. And she means what she says. She had drenched herself in petrol and had held up cigarette lighters in their hands as NHAI officers had visited the village to survey the land.

Keezhattoor, a scenic village surrounded by hills on three sides, is one of the most productive paddy areas in the district.

The family of Janaki is one of the few who are opposing the NH. Most families in this red bastion, however, have agreed to part with the land. But what has put the CPI(M) in a fix is the fact that it is their own party cadre in the locality who are at the forefront of the agitation. Also, the fact that the agitation has caught the imagination of environmentalists across the state is creating a headache for the party.

And the CPI(M), despite having a brute majority in the village, is finding it hard to navigate through this muddle.

Rajesh, who is a member of the CPI(M), says that he also had opposed the earlier alignment of the NH as it meant destruction of many houses in the village. “Now, the new alignment destroys minimum land while providing a solution to traffic issues in the entire district,” he said.

But leaders of the Vayalkilikal protest insist that the proposed bypass would sound a death knell for paddy cultivation and wetlands in the region.

“Our paddy fields are narrow in size. If a 45 metre road passes through it, then the entire paddy cultivation will be destroyed. We will not allow that,” said Divakaran, one of the leaders.

He also added that the government has not done any environmental impact study before going ahead with the plan.

The protesters, however, insist that they are not against development. “All that we demand is that development should not be at the cost of environment,” he said, adding that they have suggested alternatives including an overbridge.

The protesters have succeeded in roping in activists including Medha Patkar and Daya Bhai in support of their struggle Environmentalists and activists are planning to take out a march to Keezhattoor on March 25, pledging solidarity with the protesters.

The CPI(M) leadership, however, looks determined.

“The current protest is part of a conspiracy to taint the LDF government. The opponents of the CPI(M) are scared that if CPI(M) brings in development, they will lose the only weapon they have against it. We will find a solution,” said party state secretary Kodiyeri Balakrishnan.

Chief Minister Pinarayi Vijayan, reiterating his focus on ‘development’, said that the protest is unnecessary. “We will provide financial compensation to those affected by projects and will also rehabilitate those who lose their land. If protests continue, we have no option but to go ahead with development works. Development is our main agenda,” he said.

The CPI(M) argues that the real issue behind the protest is not loss of paddy field. “After this government has come to power, 49,000 hectares of paddy field, which were lying barren till then, have been brought back to cultivation. Nobody talks about that and they go on harping about the 11 acres of paddy land, which will be lost,” said an official at the CMO.

According to him, the protesters are playing into the hands of the BJP.

This allegation has some truth, in a way, as it is the BJP, which is making the most out of the protest. Many senior BJP leaders pay regular visits to the area. BJP state president Kummanam Rajasekharan, a known environmentalist, is at the forefront of supporting the protesters. Criticising the ‘anti-farmer policies of the LDF’, Rajasekharan has announced that BJP will actively participate in the protest march to be taken out on March 25.

While the CPI(M) maintains that the issue has been blown out of proportion by parties with “vested interests”, political observers feel that the CPI(M) is indeed paying for its own past sins.

“The CPI(M) had always been at the forefront of opposing many development initiatives—whether it was computers or the Kochi Airport. And now, when it has become an active proponent of development all of a sudden, the cadre may not be able to digest it immediately. Keezhattoor agitation is one such example,” said Jayaprakash K., a political observer.

According to him, it may be easier for the leadership to speak a different language but for the ordinary cadre, fed on a certain kind of ideology for years, it will take a longer time.

Till then, Nandigram-like episodes are bound to haunt the CPI(M).