ay, hundreds gathered in front of the Johannesburg high court to mark the death of Fezekile Ntsukela Kuzwayo, the feminist Aids activist who accused Jacob Zuma of rape. The tribute was organised by the One in Nine campaign, a group of feminist activists formed a decade earlier to provide solidarity as Kuzwayo testified against Zuma – a family friend and prominent member of the ruling African National Congress – inside the selfsame court.

Although the media disclosed Kuzwayo’s real name at the time of the trial, activists chose to defend her right to privacy with the pseudonym “Khwezi”. The court proceedings were short and brutal, exposing her sexual history and questioning her sexuality. Zuma admitted to intercourse but denied rape, explaining that he had unprotected sex despite knowing Kuzwayo was HIV-positive, but took a shower afterwards to prevent infection. 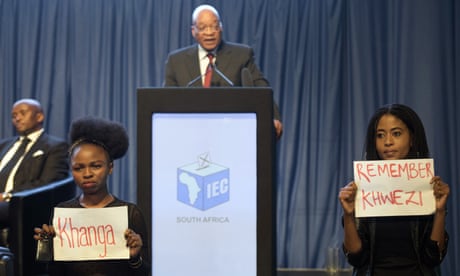 ‘Khwezi’, the woman who accused Jacob Zuma of rape, dies

Zuma argued that Kuzwayo had invited his sexual advances by wearing a kanga (a printed cotton wrap commonly worn by African women at home), and did not resist as he woke and penetrated her. His testimony nullified the notion of active consent – of a woman verbally and clearly acceding to a sexual encounter. Zuma was acquitted, while the presiding judge, Willem van der Merwe, questioned Kuzwayo’s past history of sexual assault.

One could argue that the proceedings were unremarkable. Rates of violence against women globally are at epidemic proportions: an estimated one in three women will be violated in her lifetime. Zuma is by no means the only elected official who has faced allegations of rape or sexual harassment. Nor is he the only political figure who has laughed at the notion of a woman’s right to consent. Rape is, as the South African feminist academic Pumla Dineo Gqola has said, “a crime of power”.

What remains compelling in this story, however, is the example of Kuzwayo herself, and the people who came out publicly to support her as she stood up to the might of institutionalised patriarchy, and old political allegiances.

The One in Nine campaign – composed of seasoned activists and people from the feminist, queer and HIV and Aids movements – represented the constituencies from which she came. Vastly outnumbered by Zuma’s supporters, they refused to leave the streets in front of the court despite verbal abuse from the crowds and harassment by police.

The protests were supported by a handful of public figures such as Pregs Govender, the former ANC MP. Feminists from the broader African region alsoexpressed their outrage at what they saw as the “horrific and unethical victimisation” of Kuzwayo.

In Africa and beyond, the world has often acted shamefully in the face of rape

Even in death, Kuzwayo’s example is imbued with a power impossible to ignore. The ANC Women’s League, which had vociferously defended Zuma during the rape trial, greeted her demise with an offer of routine condolences. The organisation’s secretary general made a sheepish nod to an apology, observing in an interview that Kuzwayo had been “brave and fearless” for coming forward with the accusation.

Rape is notoriously difficult to prosecute. Most cases occur with only the accused and the survivor present, and forensic evidence is often minimal. Feminists recognise how common rape is, and how often violators get away with it. They use three simple words: “We believe you” – because to believe a woman, publicly, is to stand up to male social dominance.

In Africa and beyond, the world has often acted shamefully in the face of rape. Consider how few resources are available to support work to end violence against women. Consider how many women’s organisations remain underfunded, and consequently limited in their capacity to cope with the scale of violation. And look at how one-stop centres established in collaboration with state police tend to falter once those who spearheaded their creation – usually women – move on.

We can no longer blame practical inaction on the apparent intractability of the problem. Preventing violence against women is possible. Indeed, research carried out in 2014 in Uganda’s capital, Kampala, offered proof that changing the way we think about and manage gendered power in society can lead to reduced violence, changed attitudes and increased solidarity with women.

These positive shifts will only happen if we stop relying on a handful of the “brave” to act as a frontline. We, citizens and the state, need to redistribute this onus, and start taking seriously our collective responsibility to change the power dynamics that make rape possible.

• Jessica Horn is a feminist activist and director of programmes at the African Women’s Development Fund. This article is published as part of an online campaign by the Gender Based Violence Prevention Network, coordinated by the Uganda-based organisation Raising Voices, to end violence. Use the hashtag #VAWFree, tweet @GBVNet or visit the GBV Facebook page to join the conversation