Kiran Rjiju, Minister of State for Home- How is Ishrat Jahan LeT aide ? 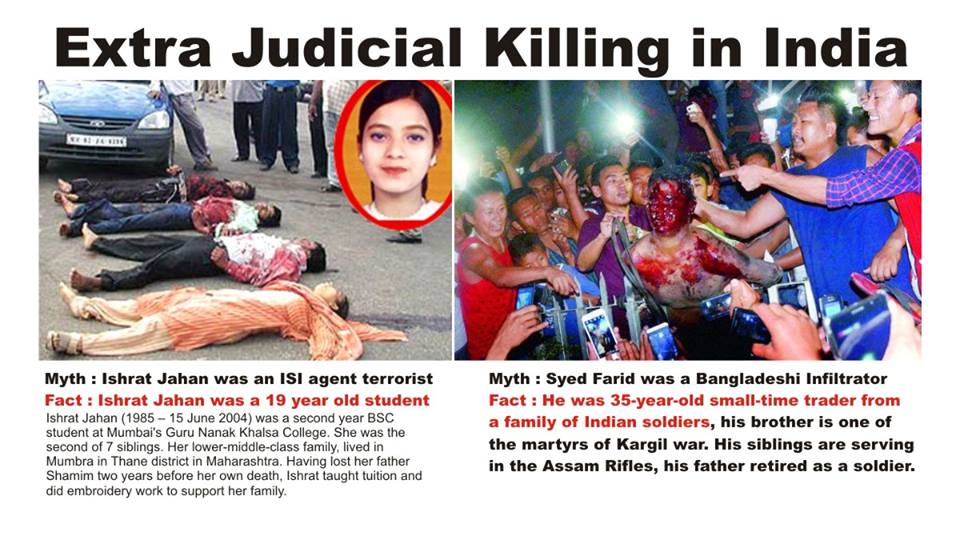 Kiran Rjiju – Minister of State for Home, the latest to join the Modi govt. factory of lies and distortions in the Ishrat Jahan murder case.
Kiran Rjiju who are you working in tandem with? Not the Indian Constitution for sure.

On 27th May 2016, speaking to India Today TV channel Kiran Rjiju, Minister of State for Home said that Ishrat Jahan was a LeT aide. How does this Minister in the Ministry of Home Affairs know this? No, not from any files or documents that he may have access to. But the LeT website, that in 2004 called her a martyr. But the same organisation in 2007 retracted and apologised and said Ishrat was not part of LeT. Why does the Mos Home not believe LeT now?
Rjiju said that the police officer who investigated the Ishrat encounter killing was at the time of the retraction by LeT (2007) sent on Central deputation to CBI.
CBI in 2013 held it to be a fake encounter – a cold blooded murder carried out in conspiracy by Gujarat police officers and IB men.
Thus the charge -Breaking News- on India Today by Gaurav Sawant , where Kiran Rjiju says “UPA was working in tandem with LeT.”!!!

Gaurav Sawant is so excited that he has got this quote that he does not bother to cross check any dates or facts. He of course repeatedly says Kiran Rjiju as MoS has access to files which we don’t .Really?? Is that how Rjiju came to this explosive finding.

A humble appeal to MoS Rjiju, please read Indian documents – Gujarat High Court judgments, CBI chargesheet. Please have faith in the Indian Courts. Please count correctly. Between 2007 and 2012 there is a gap of 5 years. You are lying and distorting facts and abusing your office. You still have nothing , I repeat nothing to show that Ishrat Jahan was a LeT terrorist. The facts and evidence still hold that Ishrat Jahan was abducted, illegally detained and murdered by Gujarat police. Rana Ayyub’s sting reaffirms this truth.
Gaurav Sawant -India Today – Put the true facts out now and confront Kiran Rjiju.