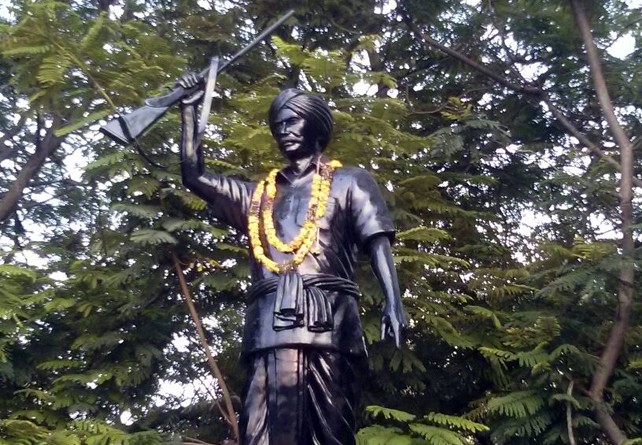 Akash Poyam
Founding Editor at Adivasi Resurgence
A Koitur from Balrampur, Chhattisgarh. Currently pursuing M.Phil. in Department of Sociology at University of Hyderabad.

It is not very often that one hears name of Komaram Bheem in the line of great Adivasi/tribal leaders of the country. Though, he has been no less of a martyr in Adivasi atruggle for autonomy, his recognition has been mostly limited within the boundaries of Telangana/Andhra Pradesh. His history is erased from history texts, just like many Adivasi histories. Apart from it, very few know that ‘Jal Jangal Jameen’ the popular slogan of Adivasi movements, was first given by Komaram Bheem. In his movement against Nizams, he argued that complete rights on all the resources of forest should be given to Adivasis.

Komaram Bheem belonged to Gond (Koitur) community, and was born in Sankepalli of Adilabad district, Telangana (in 1900). Adilabad district is located in north Telangana, making border with the state of Maharashtra. The region was predominantly populated by Gonds, and was under sovereignty of Gond Kingdom of Chanda (Chandrapur) and Ballalpur. Bheem’s childhood was spent without any exposure to the outside world, he did not have any formal education, and he grew up seeing and experiencing the plights of his people. As Mypathi Arun Kumar in his book narrates, “Bheem grew up listening to stories of exploitaion of Gond and Kolam Adivasis by Janglaat Police, businessmen, and zamindars. In order to survive, Bheem kept moving from one place to other trying to protect himself from exploitation of businessmen and extortion of officials. Crops produced after Podu farming, were taken away by Nizam officials, Janglaats arguing that the land was theirs. They’d cut fingers of Adivasi children, acussing them of illegaly cutting down trees. Tax were collected forcefully, otherwise false cases were registered. After being left with nothing in hand from farming, people had started moving out of their villages. In such situation, his father was killed by forest officials for asserting Adivasis’ rights. Bheem was agitated by murder of his father and after father’s death, his family moved from Sankepalli to Sardapur.”

In October month of 1940, one day patwari Laxman Rao, Nizam pattadar Siddique saab came along with 10 people and started abusing and harassing Gonds to pay the taxes, at the time of harvesting. Gonds resisted and in this tussle Siddique saab died in the hands of Komaram Bheem. He ran away after the incident with his friend Kondal from Sartapur to Chanda (Chandrapur) by walk.  One printing press owner named Vitoba helped and took them along with him from railway station. Vitoba was running a magazine against English and Nizam at that time. Bheem learnt English, Hindi, Urdu during his stay with Vitoba. After a while, Vitoba was arrested by Police and press was shut down. From there, Bheem went to Assam to work in tea planatation with a person he met at Manchiryal railway station. He worked there for four and half years, where he also protested against planatation owners for the rights of workers in tea plantation and was also arrested during this struggle. After four days, Bheem managed to espaced from jail. From Assam railway station, he got into a goods train and reached Ballarshah. While he was in Assam, he had heard about Alluri Sitaramraju, who was leading the Adivasi struggles in forest. He remembered struggles of Ramji Gond who had faught against Nizams’ atrocities. After returning he started planning and organizing future struggle of Adivasis.”

The present Telangana state was once part of Nizams rule of Hyderabad state. It was ruled by Nawabs of Asifjahi dynasty which was later included into Indian Union in 1948. During Nizam’s time unbearable taxes were imposed and exploitation and atrocities of local zamindars were rampant on Adivasi masses. In the background of ongoing atrocities, Bheem launched massive agitations against Nizam government, and started guerrilla warfare against their army. Making Jode Ghat the centre of his activities, Bheem continued his guerrilla war from 1928 to 1940.

“After return, he moved to Kakanghat with his mother and brother Somu. He worked for Lacchu Patel, who was head of Devadam village. Lacchu also took care of Bheem’s marriage with Som Bai. Bheem helped Lacchu settle his land litigation with Asifabad Ameensaab. This incident made him popular in surrounding villages. After some time Bheem went with his family members to Bhabejhari and cleared the land for cultivation. Patwari Janglaat chowkidars again came at the time of harvesting, they harassed and threatened them to leave the place, arguing it’s their (Nizam government) land. Bheem has decided to meet Nizam to discuss the atrocities on Adivasis and demand justice, but he could not get the appointment to meet Nawab. He returned to Jodeghat without losing hope, and realized that revolution against the rule was only solution left to their problems. He mobilised Adivasi youth and common people from twelve Gondu Kolam Gudems – Jodeghat, Patnapur, Bhabejhari, Tokennavada, Chalbaridi, Shivaguda, Bhimangundi, Kallegaon, Ankusapur, Narsapur, Koshaguda, Linepatter; and formed a guerilla army with them to protest for the land rights. He proposed a plan to declare themselves as indipendent Gond kingdom. (Bheem’s demand for a separate Gond state was the first in the series of demands for autonomous Gondwana state for Gonds).

With the sound of Tudum, Ragal was hoisted for initiating the movement. Gond’s revolt started by attacking Babejhari and Jodeghat landlords. Nizam government was frightened after getting to know about this uprising and sent Asifabad collector to negotiate with Komaram Bheem and assured that they will be given land pattas and additional land will be given to Komaram Bheem himself to rule. But Bheem denied their proposal and argued that his struggle is for justice and Nizam has to release those people who have been arrested on false charges, at the same time leave their (Gond regions) place and asserted his demand for self-rule.

War had begun with the sounds of Tudum and Tuta. Gond Adivasis with utmost passion and ethusiasm, protected their land. Bheem’s speech encouraged them to participate in the struggle for land, food and freedom. People have decided to fight until their last breath for protecting their future. During this time, Bheem raised slogan of – “Jal Jangal Zameen”. Nizam sarkar did not listen to the demands of Bheem and Gond’s oppression continued, while Nizam sarkar started consipiring to kill Bheem. Tahsildar Abdul Sattar led this cruel conspiracy and sent Captain Aliraja Brands along with 300 army men to Babhejhari and Jodeghat hills. Nizam sarkar failed to capture him and his army. So they bribed Kurdu Patel (from Gond community), who became informant for Nizam sarkar and provided information about Bheem’s army.

Based on this information,  on September 1, 1940 early in the morning, “women in Jodeghat had spotted armed policemen surrounding their village as they came looking for Komaram Bheem. It was three years since Bheem had been leading a rebellion on the question of rights of tribal people to pastures and the lands being tilled by them in the forests. Bheem, who was camping at Jodeghat with a handful of his warriors, were instantly up and got ready by arming themselves. Most of the rebels could manage to get hold of axes, sickles and bamboo sticks. Asifabad Talukdar Abdul Sattar, a personification of the Nizams’ tyranny tried to get Bheem to surrender through emissaries. After refusal for the third time by Bheem to submit himself, Sattar ordered to open fire . The tribal rebels could do nothing but went down fighting. “As many as 15 warriors besides Bheem attained martyrdom. The incident plunged the tribals into gloom on that full moon day,” the late Maru master and Bhadu master, the close aides of Bheem, used to say whenever they wound up their narrative of the incident. Not many, however, got to see the martyrs as the bodies were burnt unceremoniously.” That was a full moon night, when hundreds of his followers armed themselves with bows, arrows, and spears and launched assault against the police. Bheem and his followers fought with bravery and lost his life in the battlefield after suffering fatal injuries.”[i]

Assuming that Bheem knew the tradtional spells, they feared he could come back to life. Therefore they shot him until his body became like a seive and unrecognization. They burned his body at the instant and left only when they were assured that he is no more. A gond star has fallen on that day of Ashauja Porunima. The place that echoed with the sounds of Tudum, wept in the Jodenghat hills. All Gond villages cried and the place drowend in sorrow. The entire forest was resounded with slogans like Komaram Bheem amar rahe, bheem dada amar hai.”

Many existing historical accounts[ii] about Komaram Bheem claim that Komaram Bheem was a nationalist vanvasi (hindu) leader who fought against the Nizam government. These narratives argue that Bheem’s resentment against Nizam was because of ‘Islamic’ oppression on Hindus and destruction of Hindu culture. When, Gond Adivasis are not even Hindus, how does Bheem become a Hindu icon leading the battle against ‘islamist’ oppression? Which part of Bheem’s history suggests that he endorsed to ‘Hindu’ religion or fought for Hindu rights? Gond people’s history provides us an entirely different story. It suggests that these claims are mere propaganda to associate Bheem into Hindu nationalist discourse by manipulating history. Bheem’s movement against Nizam was solely born out of ‘denial of basic Adivasi rights over land, recourses and demand for autonomy’. In his people’s imagination, he was only seeking to liberate his people from dikus (outsiders) and was fighting for justice and self-rule.

In the light of decades long Adivasis struggle for patta rights, Komaram Bheem’s contributions remains significant – He exemplifies a revolutionary icon for all Adivasi movements and also reminds us of the forgotten promises of nation and state towards the Adivasis. Komaram Bheem holds utmost respectful position among Gond Adivasi community and is considered as a deity (pen). Gonds observe Bheem’s death anniversary every year on Aswayuja Powrnami and on this day, an event is organized at Jodeghat to commemorate his life and struggle. After long struggle, 72 years after his death, in 2012 Komaram Bheem’s statue was installed at Tank Bund, Hyderabad. Komaram Bheem will forever remain as a leader and icon for age long Adivasi struggle of ‘Jal Jangal Jameen’.