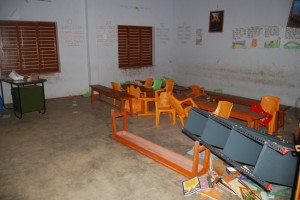 Here is the story in Meera Udaykumar’s own words.Her school was vandalised yesterday.

When Meera Udaykumar finally got home after a long and stressful day – and at my urging, she finally sent me the photographs you will see in this message.

Her day began early with a phone call telling her that her school had been attacked and vandalised by unknown miscreants. Perhaps I was among the first few to get the news directly from her before setting out to inspect the extent of the damage. I immediately called Nity in Chennai and asked if he could alert media. And a couple of hours later Meera called back, first of all to tell me the state of the school and the kind of damage inflicted. She also told me that NDTV had interviewed her for a few minutes and especially asked me to watch out for her message in which she has spoken directly to the people of Tamil Nadu, of India and the world – saying that these were non-violent and peaceful protestors – their only demand was for renewable energy – and no nuclear power plant. How does that make them anti-national or seditious? Why should children be made to suffer for no fault of their own?

But till now – 11pm on the night of the 21st march – NDTV has not carried her story.

We need to ask the question why? A phone call made to a senior NDTV executive in the afternoon by us from Alibag, brought forth a vague response about editorial decisions which were not in the control of anyone else.

Who is controlling these decisions and calling the shots? Why is the centre insecure about putting a woman like her onto the screen. Are they worried that her presence might evoke more sympathy rather than hardening public sentiment against those who are obstructing the Energy security of India?

The images enclosed herewith show the deliberate damage inflicted on the buildings, the equipment, the school van, the library, the water pipes, the precious books, tables, chairs and blackboards – not to mention plants and the compound wall.

We would not even deal with our enemies the way we seem to be dealing with people who have sacrificed careers and comfort to come home and work for the most needy. Uday Kumar, Pushparayan, the thousands of strong and courageous women , men and children who are collectively exhibiting a leadership and peaceful non-co-operation out of which this country and our people achieved our freedom and won the admiration of the world. It is tragic indeed that the once proud nation has descended to this – exemplified by the attitude of the `official spokesperson’ of the Congress party on NDTV earlier this evening.

Hope some sense will prevail – that our leaders and the Atomic Energy Establishment they think they control will miraculously have the courage to show both courage and humility to say, yes, we need to re-examine and go back to the drawing boards to make sure the checks and balances the people are asking for can be implemented.

Meanwhile, just spoken to friends in Koodankulam – the time is 1130pm

They want to be together , and they came by road, and rickshaw, by boats and cross country. All the boats or `fibres’ from several villages are now anchored off Koodankulam – this is a non violent fleet and does not carry guns.

But the papers and others are speaking of reinforcements of the paramilitary, of tear gas and armoured vehicles moving in. Of repeated flag marches intended to intimidate.

Supplies of water and milk have been blockaded by the police.

Police are apparently harassing the residents of Koodankulam by banging on doors in the middle of the night – and stopping people unnecessarily for questioning.

The leadership and the people are sworn to non-violence – but who can tell what spark can set off violence. There is tension everywhere they tell us….

And the PIL filed in the High Court in Chennai today rightly demands a lifting of section 144, and restoration of normalcy – especially to ensure the right to food and security of 856 primary school children , of another 715 kids below the age of five; then another 946 kids at the Idinthakarai primary school, and 462 at Kuthenkuly – not to mention a number of old people.

So, we would like to ask the honourable Chief Minister if this is what she was told to do by using the Iron Fist? And how will she ever be able to fulfil her promise to the people of Tamil Nadu that she has their interests close to her heart?

I told our friends in Idinthakarai – sleep well – and I said the same to Meera – but the words sounded hollow to my own ears ….we are uneasy tonight – and will be awaiting the midnight call and the midnight swoop down – except this is not a film, but a reality in this our largest democracy………

Read all news of protest at Dianuke

Australia- the Native Title Act is now tainted by Adani, but our fight continues
Excerpt from the preface to Ambedkar: The Attendant Details
SC shocked over non-release of undertrials
Jharkhand-Unchecked mining spells doom for Saranda forest