Kumbh in the Times of Covid: How World’s Largest Religious Festival Turned Super-spreader in the Past 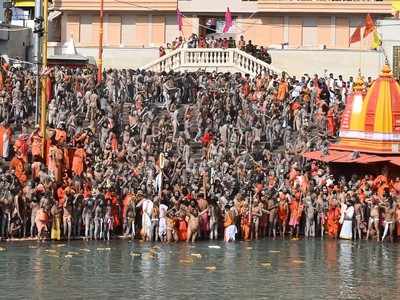 Sadhus take a dip in the Ganges river during the first Shahi Snan at “Kumbh Mela” in Haridwar, India, March 11, 2021. (Reuters/Anushree Fadnavis)

Kumbh Mela in Haridwar is once again being held in the time of a health emergency. The festival attracts the largest human gathering in the world.

On paper, every COVID-19 norm is expected to be followed. But when the sole focus is on crowd management, it’s impossible to impose norms like social distancing and mandatory testing at the mela place or even distributing hand sanitisers.

The religious event could well end up as a super-spreader with 102 people already found positive in the tests done on Monday. Such a large mass gathering, in fact, can be a Covid hotspot in itself as it may carry many silent carriers who, naturally, may not go through the local testing process but can infect a great number of people in the mela area or wherever they travel. Haridwar, in the last two days, has seen over 1,000 Covid cases with active caseload data at 2,812 cases.

This year’s Kumbh festival is again being held in similar circumstances like in the 19th century and, to some extent, in early years of 20th century in northern India when epidemics like cholera and plague were the main deterrents for the authorities. Haridwar and Allahabad held Kumbh Mela at a 12-year interval and Ardh Kumbh festivals at a six-year interval.

Kumbh Mela initially was a good money-making option for the East India Company and later for the colonial British government in India. Even for the historical records, Kumbh Mela has always been the largest mass gathering event and Britishers saw good return by taxing the individuals visiting the Kumbh Mela event. But the event also brought the horrors of epidemics with it, something that later drew the attention of the colonial government.https://2e0898ea4b4bfecb4fef1bf0b5363749.safeframe.googlesyndication.com/safeframe/1-0-38/html/container.html

According to the World Health Organization, monograph series on cholera published in 1959, United Provinces (current Uttar Pradesh and Uttarakhand) and the adjoining part of Punjab saw higher cholera mortality rate in the years Kumbh Mela was held at Haridwar or Allahabad. Kumbh Mela obviously then acted as super-spreader.

R Pollitzer, whose cholera death analysis was used by the WHO in the paragraph above, said Kumbh Mela and cholera deaths in India were closely linked.

The Cholera outbreak at 1867 Kumbh Mela at Haridwar saw first major sanitation exercise but the initiative failed without much public participation. That pushed the authorities to add an extra a security measure — colonial British government also started controlling people’s entry to the Kumbh Mela area. The push was to reduce fatalities and improve hygiene of the Mela area.

During the 1885 Ardh Kumbh in Haridwar, along with increased sanitation practices, all lodging-houses in the city were registered and a cap was placed on the number of people allowed in a lodging-house.

After the cholera outbreak of 1891 Kumbh Mela in Haridwar, Haridwar Improvement Society was established which was supported by Hindus from across the country. India in the same year saw more than 5,80,000 cholera deaths and eventually the event was blocked and over 200,000 pilgrims were excluded from the mela area as written by George Child Kohn in ‘Encyclopedia of Plague and Pestilence: From Ancient Times to the Present’. Railway travel to Haridwar was also blocked.

The colonial British government passed the Lodging-House Act (Act 1 OF 1892) to control Mela gatherings. The aim was to prevent overcrowding to ensure better sanitation and hygiene practices.

The 1894 Kumbh Mela again saw cholera spread during the event while 1897 Haridwar Ardh Kumbh saw plague outbreak. After plague outbreak, all lodging-houses in the city were closed and pilgrims visiting the mela area were segregated in a camp outside the town.

The 1894 Allahabad Kumbh Mela saw at least 1,431 recorded cholera deaths near Allahabad as reported in an analysis quoting the annual report of the Sanitary Commissioner of the North-Western Provinces and Oudh in the book ‘Culture and Power in Banaras’ published by the University of California Press.

The 1906 Allahabad Kumbh Mela had good sanitation practices but it still reported a major cholera outbreak. The reason being given then was people’s habit of drinking polluted water when most of the rivers were almost dried-up. Also, excreta of cholera patients were a big problem as cholera spreads through contaminated water.

Of all deaths in India in 19th century and early 20th century, 5% were due to cholera epidemic but its scale was significantly declined on the mortality scale in 20th century’s second quarter. The 1906 Kumbh Mela in Allahabad is the last event that saw a major cholera outbreak.

According to a working paper of the Indian Institute of Management at Ahmedabad, ‘Pandemics and Historical Mortality in India’ by Chinmay Tumbe, that quotes Statistical Abstracts of British India as its data source, average cholera death rates per 1,000 inhabitants in the United Provinces reduced to 0.9 during 1911-1939 period from 1.4% during the 1877-1910 period.

The Wisdomkeepers- The promise, the hope, and the transformative power of free libraries
An Open letter to Assocham - Lop-sided discussion on nuclear energy
UK banking chief notes concern over biometric authentication
Nearly Rs2 lakh crores of asset sales planned/ completed by companies with debt exposure of around R...