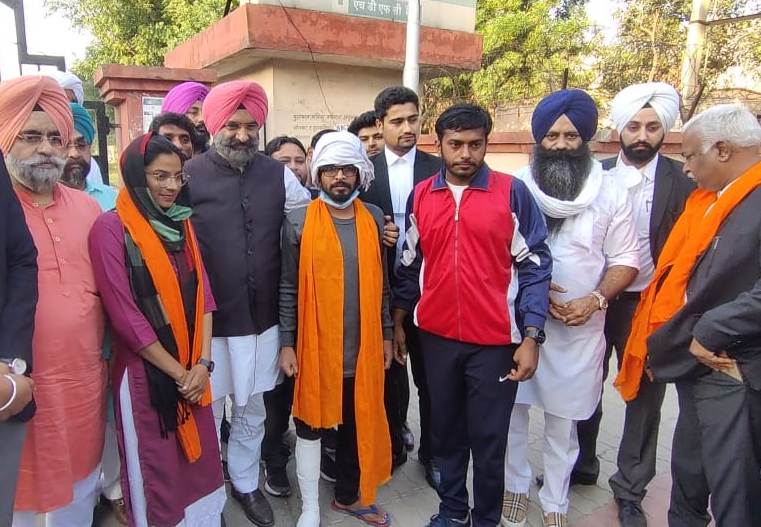 Shiv Kumar after his release from Sonepat district jail on Thursday

Labour activist Shiv Kumar, an associate of activist Nodeep Kaur, on Thursday got bail in connection with an alleged attempt to murder case which was registered on January 12.

After the court’s order, he was released from Sonepat district jail in the evening. Kumar had got bail in two alleged extortion cases on Wednesday.

The court of Sessions Judge YS Rathore in the order said that the co-accused namely Nodeep Kaur, whose case is identical to that of applicant, has been released on bail by the Hon’ble High Court vide order dated 26.02.2021 in CRM-M No.7398 of 2021.https://54a1f60ad25f9fd27b94bef0ac7e77e1.safeframe.googlesyndication.com/safeframe/1-0-37/html/container.html

In these circumstances, the applicant (Shiv Kumar) is thus entitled to be released on bail on the ground of parity, advocate Jatinder Kumar said.

The court has ordered to release him on bail on furnishing personal bond in the sum of Rs 1 lakh with one surety in the like amount to the satisfaction of the Area/Duty Magistrate,

Notably, a case was registered on the complaint of Inspector Ravi Kumar, SHO, Kundli under Sections 148, 149, 186 (obstructing public servant in discharge of public functions), 332 (voluntarily causing hurt to deter public servant from his duty), 353 (assault or criminal force to deter public servant from discharge of his duty), 307 (Attempt to murder), 379B (Snatching with causing hurt) and 384 (extortion) against the labour activist Nodeep Kaur of Muktsar in Punjab and other members.

The Kundli police have arrested Shiv Kumar of Devru village in all the three cases on January 23 and after the 10 days police remand he has been sent to judicial custody on February 2.