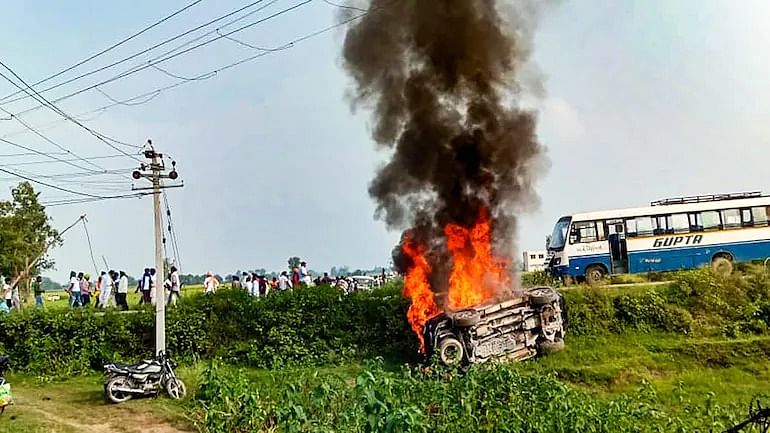 In an urgent virtual press conference called by Samyukt Kisan Morcha a while ago, members of the 9-member coordination committee of SKM addressed the media with regard to the ghastly incidents in Lakhimpur Kheri of Uttar Pradesh. SKM’s Richa Singh and Guramneet Mangat who are in Lakhimpur Kheri (the former during the occupation of the helipad in Tikonia earlier in the day and the latter throughout the murderous incidents also) also shared the details of the shocking events today.

Samyukt Kisan Morcha is able to confirm the deaths of four farmers at this point of time – Lovepreet Singh (20), Daljeet Singh (35), Nachattar Singh (60) and Gurvinder Singh (19). There are around 12 to 15 persons injured and hospitalised. SKM pays respectful homage to all these martyrs.

It is confirmed that Ashish Mishra Teni (son of Union Minister of State for Home Affairs Ajay Mishra Teni) came with three vehicles around the time that farmers were dispersing from their protest at the helipad and mowed down farmers and towards the end also attacked SKM leader Tajinder Singh Virk directly, by trying to run a vehicle over him. There were also shots fired, and one of the deaths was by this shooting by Ashish Mishra Teni and his team.

SKM demands that a case under Sec. 302 (murder) has to be registered immediately against Ashish Mishra Teni and others involved in this attack on farmers.

SKM also demands that the Union Minister of State Ajay Mishra Teni should be dismissed immediately from the Central Government. It has to be remembered that just a few days back, he had issued a brazen threat to farmers. https://m.facebook.com/story.php?story_fbid=235841365049920&id=100005336386969&sfnsn=wiwspwa

SKM further demands that the whole gory episode has to be investigated by a Sitting Judge of the Supreme Court.

SKM calls upon all farmers’ organisations across the country to protest at District Collector’s/DM’s/DC’s offices in all districts between 12 noon and 1pm tomorrow, to press for the above demands.

SKM also condemns in strong terms the statements of Haryana CM Manohar Lal Khattar. Reacting to the Haryana Chief Minister’s statements abetting violence against peacefully protesting farmers, Samyukt Kisan Morcha demands an immediate apology from him and a resignation from the constitutional post that he holds.

SKM appeals to all citizens participating in the farmers’ movement to continue their protests peacefully, and non-violently, as they have done all the past ten months. The movement recognises the various dirty ways in which BJP-RSS forces are desperately trying to break it, and will avoid any such attempts by holding on to satya and ahimsa, said SKM.