Land degradation in India hurts farmers and forest dwellers the most 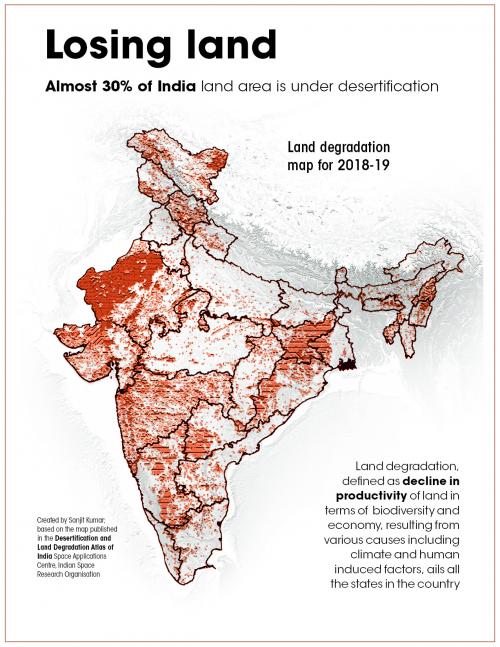 More than half of the degraded land in the country is either rainfed farmland, responsible for the food security of the country, or forest land that offers the best defence

With close to 30 per cent of its geographical area already affected, land degradation is definitely among India’s most pressing environmental problems. To make matters worse, almost all Indian states have recorded an increase in degraded land in the past 15 years, with the most rapid increase being noted in the biodiversity-rich northeastern states. These details have been published in the Desertification and Land Degradation Atlas of India, released earlier this month by the Indian Space Research Organisation (ISRO).

The numbers, collected for 2018-19, also highlight the stiff challenge India will need to face to achieve its target of becoming land degradation neutral by 2030, announced by the Prime Minister in September 2019 at the United Nations Convention to Combat Desertification.

The only silver lining though is Rajasthan, the most degraded state, along with Uttar Pradesh and Telangana, have seen a reduction in their degraded land in the last 15 years.

The small victories by the three states fail to mask the biggest problem with the rapid degradation in the country that it adversely affects the life and livelihood of the most marginalised social and economic groups: Farmers dependent on rains and forest dwellers.

Most productive land, the most vulnerable

More than half of the degraded land in the country is either rainfed farmland, responsible for the food security of the country, or forest land that offers the best defence against climate change, Down to Earth’s analysis of the ISRO data has shown.

Almost 37 mha of the degraded land is what the report classifies as agriculture unirrigated. And water erosion is the most common reason (80 per cent) for degradation of unirrigated farmland, followed by wind erosion (17 per cent), salinity / alkalinity in land (two per cent) and water logging (one per cent).

In irrigated farmland, there would be a crop cover all the time whereas in rainfed areas, a lot of erosion happened because the top soil remained exposed and got washed away easily with rains, he added.

While the problem was well-known, Ramanjaneyulu said the solution was less talked about. The country’s farm policy over the years has encouraged “resource-intensive, chemical and energy intensive cropping patterns and practices” which work well in irrigated farms but are unsustainable in rainfed farms.

This is surprising as 66 per cent of the farmland in the country remains rainfed, according to the Pocket Book of Agricultural Statistics 2020, released by the Union Agriculture and Farmers’ Welfare in May 2021.

The country, instead, needs a separate policy for rainfed farms with best practices that work for them.

“The US, after a major dust storm event in the 1930s, brought a legislation that says the top soil of any land should not remain exposed. So, it is a normal practice there to use mulch in between two crops as it not only helps the land regain its nutrients but also helps save the top soil against erosion,” he said.

In India, the practice of using mulch or cover crops has gone down in the past years because of the rampant use of chemical fertilisers.

After unirrigated farmland, forest remains the most vulnerable to degradation. This is surprising as the common belief is that afforestation drives are the surest solution to land degradation.

India has a little over 71 mha of forestland, according to the India State of Forest Report 2019, released by the Union Ministry of Environment, Forest and Climate Change.

Of this, 30 per cent or a little more than 21 mha of forestland is degraded, says the land degradation report. It adds that vegetation degradation (96 per cent) is the major reason for forest degradation.

Vegetation degradation is referred to as reduction in the biomass and / or decline in the vegetative ground cover, as a result of deforestation and / or overgrazing. Such degradation is a major contributory factor to soil degradation particularly with regard to soil erosion and loss of soil organic matter.

“Anthropogenic pressures are reducing both the quantity and quality of forests. Deforestation for a variety of developmental needs is reducing the extent of natural forests. On the other hand, drivers of degradation such as grazing, lack of natural regeneration, short rotation harvesting are causing deterioration of growing stocks in forests of India,” Ajay Saxena, forestry consultant, said.

While Rajasthan is understandably the most degraded state, owing to its natural climate and soil systems, it is followed by Maharashtra and Gujarat.

Maharashtra is a problematic state as it is responsible for the maximum share of desertification found in three land types: agriculture unirrigated land, forestland and land with scrub, the third most degraded land type in the country.

Courtesy Down To earth

#Aadhaar not mandatory says Rajeev Shukla to Lok Sabha #UID
Did you get a strange Google Docs invitation to edit?
#India - Open Letter to UIDAI about the (In) Convenience of #Aadhaar #UID #mustread
#India - Norway - Lid blown off fertilizer fraud