Law and disorder: rough justice rules in the developing world

Around 4 billion people live without the protection of the law, making justice an urgent priority in new development goals 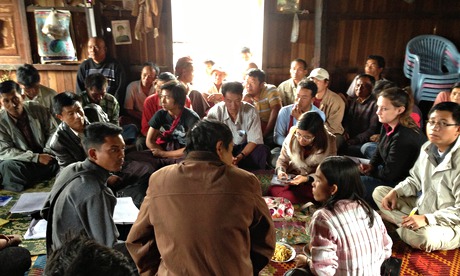 In eastern Burma last month, in northern Shan state, I witnessed farmers trying to register their land claims under a new process set out by the ministry of agriculture.

Some of them have had land stolen by the military government or by crony companies. All of them have lived under a regime in which the law has been more a threat than a source of protection. Their decision to take part in an official legal process signals courage, and a measure of hope.

Those farmers’ chances in life depend on whether they can make the law work for them. They are not alone: around the world, some 4 billion people live without the protection of the law. As a result, they can be unfairly driven from their land, denied essential services, and intimidated by violence.

And yet when world governments adopted development goals 15 years ago, law and justice were left out. Those original millennium development goals (MDGs) were laudable, and we have made significant progress in improving health and education, and in reducing poverty.

But we are grievously far from what justice demands, and we will not get there without addressing issues of law and justice head on.

On 7 February in New York, a UN open working group is meeting to consider that possibility. Representatives from 30 governments are discussing how the rule of law and justice might figure in the global framework that succeeds the MDGs.

We put the same question to a community of 300 grassroots legal empowerment organisations from every region in the world. Out of that conversation emerged five measurable to achievable priorities (pdf). By committing to these now, the UN could embrace an approach to development that has justice at its heart.

First, people should have information about the laws and institutions that govern their lives. Giving citizens a right to information is a powerful first step in making government more accountable. For example, Delhi slum dwellers have used right to information requests to hugely cut delays in the issuing of ration cards for subsidised food. 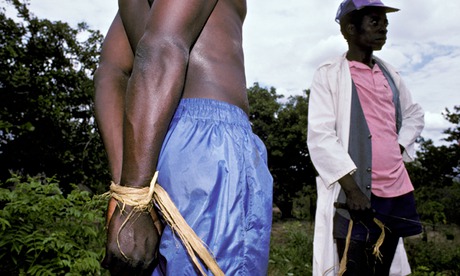 A man accused of stealing a bicycle is tied and led to police station, north of Macomia, Mozambique. Photograph: AlamySecond, everyone should have access to a legal identity. Millions of people around the world, such as the Biharis in Bangladesh or theNubians in Kenya, face discrimination when applying for birth certificates or ID cards. If you want to open a bank account, own a mobile phone, or get your child vaccinated, government documentation is often required. Governments should ensure that access to legal identity is universal, while guaranteeing that no one is unfairly denied basic services or economic opportunities due to a lack of documentation.

Third, governments and private firms alike should respect community rights over land and natural resources. About three billion people live without secure rights to what are often their greatest assets: their lands, forests, and pastures. Increasing global demand for land is leading to exploitation and conflict. Research shows that giving communities the power to govern their land and natural resources leads to poverty reduction and better stewardship.

Fourth, people should be able to take part in creating and implementing laws and policies, especially those that affect them most directly. When communities in Uganda got involved in overseeing primary healthcare facilities, child mortality dropped by 30%. By giving people a say in how services are delivered, we can make government more responsive and more just.

Finally, the legal system itself: for the first four commitments to have any power people need to be able to obtain redress when things go wrong. Everyone should have access to fair, effective forums for resolving conflicts, for seeking protection from violence, and for addressing grievances with the state. This means quality services from the police, the courts, administrative tribunals, and customary authorities.

Civil society groups have a vital role in realising all five goals. The farmers in Shan state had gathered to meet a grassroots advocate, a “community paralegal”, who answered questions about how the land registration process works. The paralegal assisted farmers with complex cases, such as those involving lands that had been grabbed in the past.

Grassroots civil society efforts have proven effective in many parts of the world. In the Democratic Republic of the Congo, community paralegals and public interest lawyers are helping people to hold mining firms accountable for damage to rivers and farmland. In the US, community organisers are working with undocumented immigrants to claim unpaid wages.

But realising the quest for justice is not possible without state commitment. A global development framework is one of those rare things that nations in our fractious world gather to agree on. The goals adopted at the turn of the millennium were worthy but to fulfil them completely – to leave no one behind –justice needs to be at the centre of our new pact.

Vivek Maru is chief executive officer of Namati, which is building a movement of grassroots legal advocates around the world.