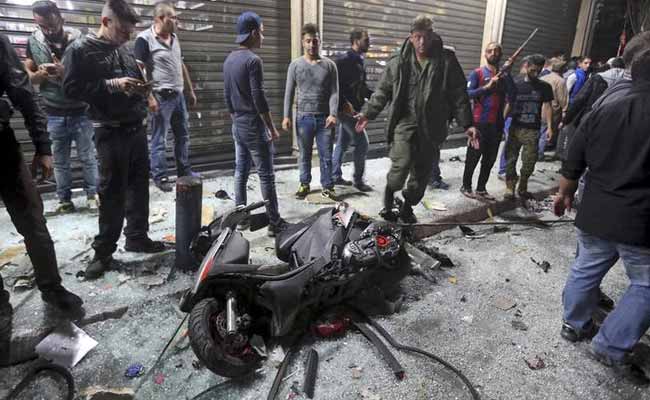 A motorcycle is seen amid residents inspecting a damaged area caused by two explosions in Beirut’s southern suburbs, Lebanon on November 12, 2015. (Reuters Photo)

BEIRUT:  Lebanon observed a national day of mourning on Friday after two suicide bombs the day before killed 43 people in southern Beirut, in an act the United Nations condemned overnight as “despicable”.

Local television dedicated morning bulletins to the attacks, which were carried out late on Thursday in a busy residential and commercial area that is a stronghold for Lebanese Shi’ite movement Hezbollah, and were claimed by Islamic State.

“Unacceptable”, newspaper L’Orient Le Jour said in a one-word front-page headline. Another daily, al-Diyyar, showed gruesome pictures of the bodies of the bombers, including a bloody disembodied head.

The pro-Hezbollah al-Akhbar proclaimed there was “no room for retreat”, after the group warned of a “long war” against its enemies.

UN Secretary General Ban Ki-moon condemned the attacks, urging Lebanon’s security services and state institutions “not (to) allow this despicable act to destroy the relative calm that has prevailed in the country over the past year.”

The explosions were the first attacks in more than a year to target a Hezbollah stronghold in Lebanon, as the Iran-backed group steps up its involvement in the war in neighbouring Syria.