Media Personality and activist turned back

NEW DELHI: What does it mean when a government extends its hostility for another government to eminent persons like Muneeza Hashmi, daughter of legendary poet Faiz Ahmed Faiz, stops her from participating in a conference in Delhi, from even registering at the venue or checking into the hotel, and sends her back as if she was a criminal? How does it reflect on a democracy when its government pushes for action against a person who has always stood for democracy, rights and justice?

Muneeza Hashmi, a well known television and media personality in her own right, was listed as a speaker at the 15th Asia Media Summit being held here between May 10-12. On the eve of the conference, sources said, the government of India told the organisers of the even that she should not check into the hotel or register for the conference, And of course she did not have New Delhi’s permission to speak. She was re-booked by the organisers at another hotel, they apologised profusely, and she left for Pakistan the next morning. The Ministry of Information and Broadcasting was an organiser. TV 18 has reported that the Ministry has denied all knowledge of the incident.

Significantly both Hashmi and the Faiz Foundation kept a lid on the unsavoury incident as they did not want India-Pakistan relations to be further adversely impacted. Hashmi met Indian friends but made it clear that she was not going to speak of this, and would prefer to go back to Pakistan without a fuss. However, the story has since found its way into sections of the media and as sources said, Hashmi now realises it cannot be covered up. She has been committed to peace, harmony and cooperation between India and Pakistan is a well respected figure in both countries.

In a tweet marked to the Prime Ministers Office, India and Minister of External Affairs Sushma Swaraj, Hashmi’s son Ali Hashmi wrote “This is your Shining India? My 72 year old mother, daughter of Faiz, denied permission to participate in conference after being officially invited. Shame.” He has given the link to a story that confirms this, and points out further that the Ministry of Information and Broadcasting that had organised the event claimed to have no knowledge of what was her virtual deportation. 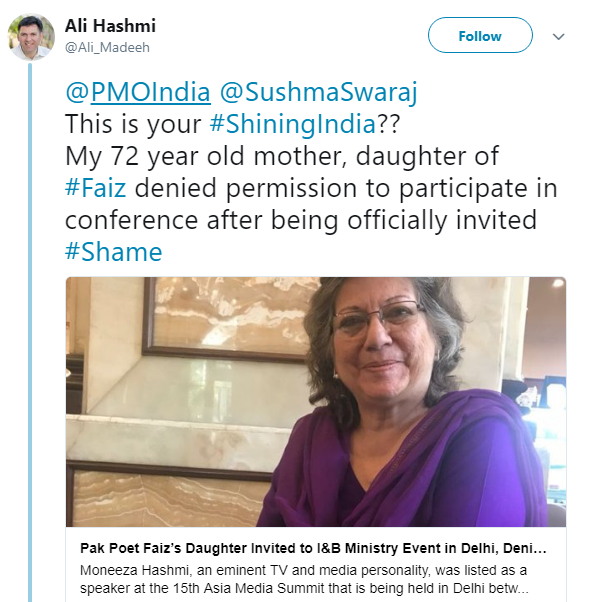 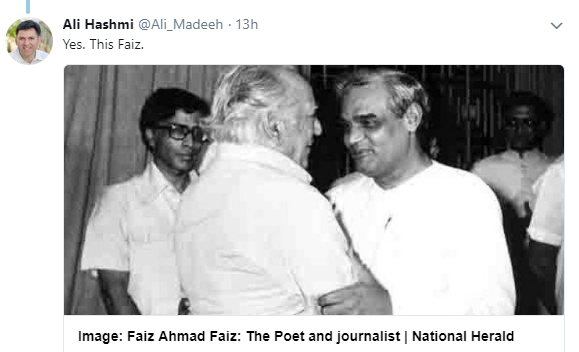 India and Pakistan during this period of increased hostility have cracked down on the peace lobby within both countries, with scholars, activists not being given visas. Muneeza Hashmi had a long term visa for India so came in without normal bells being rung. And so the government scrambled to get her off the list, and out of India, once her presence here was known and confirmed.

Muneeza Hashmi has always stood against military rule in her country, is a strong advocate of peace and amongst those to promote the legacy of her father Faiz Ahmad Faiz. She was the first woman in Pakistan television for a long while, and has played a role in clearing the obstacles for the promotion of women in the media to the higher levels of management. She has been steadfast in working for women empowerment in Pakistan, known for walking the talk and more.

Even now she was not willing to speak of her humiliation or make an issue of it back home in Pakistan, being of the view that this should not be allowed to come in the way of larger peace and friendship between the two countries. Incidentally she was born in Shimla. It is a matter of deep shame for the peace loving people of India that an individual who has stood for democracy and rights and peace has been treated in this shameful manner during a visit to Delhi.

The Asia Media Summit was organised by the Asia-Pacific Institute for Broadcasting Development (AIBD) and international body hosting delegates from across the globe. The Ministry of I&B was the host. As a senior Indian activist asked, “what would all the participating delegates think of the hosts?” Muneeza Hashmi has been a regular at such meetings, being a recognised media authority from Pakistan.

“Thank you for your and other friends support. I leave it to your judgement to deal with this matter. We the Faiz Family and Faiz Foundation will continue to work for peace between our two countries. As Faiz would say لمبی ہے غم کی شام مگر شام ھی تو ہے
(lambi hai gham ki shaam magar shaam hi to hai)”