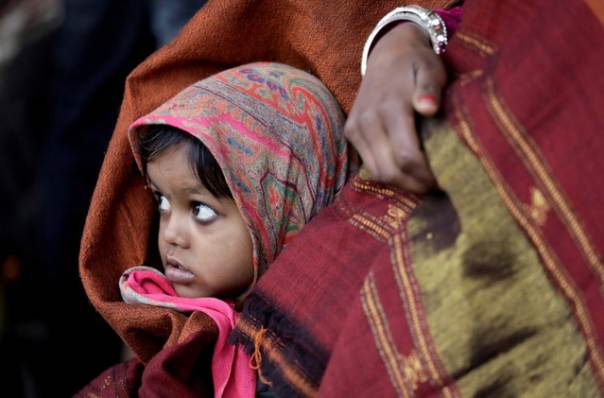 A girl wrapped in a shawl looks on as she waits along with her mother for a train at a railway station on a cold winter morning in New Delhi, India January 3, 2018. Credit: Reuters/Saumya Khandelwal

Some are reportedly accompanied by their traffickers and run the risk of being trafficked again.16 hours ago

Vijay Kewat waited patiently at Gaya railway station, ready to receive 100 child workers who were headed home under India’s lockdown. He was speechless when 500 streamed off the train instead.

“It was an extraordinary sight, and even officials were stunned,” the child rights activist said.

Abandoned by employers and packed with haste onto a special train carrying migrant workers home, the children poured onto the platform at Gaya station in eastern India last week, Kewat said.

And many promptly disappeared into nearby streets, he added.

“That day at the station, everyone realised that there were thousands of trafficked children being sent back home as factories were closed and nobody was documenting this return,” said Kewat, who works at the charity Centre Direct.

Over the last two weeks, similar instances have been reported from Rajasthan to Assam to Delhi, all states where children have been rescued and sent to quarantine centres.

India has launched multiple campaigns to check child labour in recent years, cracking down on factories where children are hired to make bangles, stitch shoes or sequins.

The vigilance has only driven the trade deeper underground, child rights campaigners say, with the scale now visible as fearful employers abandon or banish the children, many of whom were trafficked into illegal work.

Indian labour laws ban the employment of anyone aged under 15, but children are permitted to support family businesses outside of school hours. Employers and human traffickers widely exploit this provision, child rights campaigners say.

With transport starting to resume after the strict lockdown, child workers are being sent back home by their employers, armed with fake identity documents, child rights campaigners say.

Some are accompanied by their traffickers and run the risk of being trafficked again once businesses reopen, they add.

“Since the lockdown began, we have been worried about children trapped in workshops,” said Basant Haryana of the Child Rights Watch Group in the western city of Jaipur, where children are used to make popular handicrafts.

“We first spotted them queueing up for food, and then when the lockdown eased, they were just put on private buses and sent home illegally. An opportunity to document them was lost.”

Haryana is a petitioner in a case filed in the Rajasthan High Court in Jaipur, asking the state to rescue child workers during the lockdown, citing examples of children who had been beaten and abandoned.

April’s death of a 12-year-old farmworker on a 100km (62 miles) trek home in lockdown spotlighted the plight of child workers, who the United Nations believes total some 10 million in India.

“We are taking cognisance of every case we are hearing of,” said Priyank Kanoongo, chairman of India’s National Commission for Protection of Child Rights.

“We ourselves have been involved in a few rescues,” he said. “We want these children accounted for and taken care of.”

Three years after he was trafficked into work, Meena Devi’s son called out of the blue last month and told his mother he wished he could return home.

Caught in the lockdown, the teenager was not sure of his location or how he could return from his work tending goats.

“They took him saying he would get a good job in Mumbai or someplace and disappeared with him,” Devi told the Thomson Reuters Foundation by phone from her village in Gaya district.

“I worried but couldn’t do anything and then suddenly he called a few days back. I asked him if he was getting food and was safe. He said ‘yes’ and asked me to bring him back home.”

Children working in hazardous occupations are at higher risk now since no employer will reveal their identities and numbers as employing them is a criminal offence, said Puja Marwaha, CEO of charity Child Rights and You (CRY).

“Child protection services must be made part of essential services,” Marwaha said, adding that the government should make special efforts to track all children and their families.

In states such as Bihar, with more than 450,000 child workers, mechanisms are being put in place to map child workers.

“We are trying to track the children returning, especially those who are unaccompanied,” said Pramila Kumar, chairwoman of the Bihar State Commission for Protection of Child Rights (BSCPCR).

“This is an organised crime, and we would like to ensure that the children who have returned home do not go back to work.”