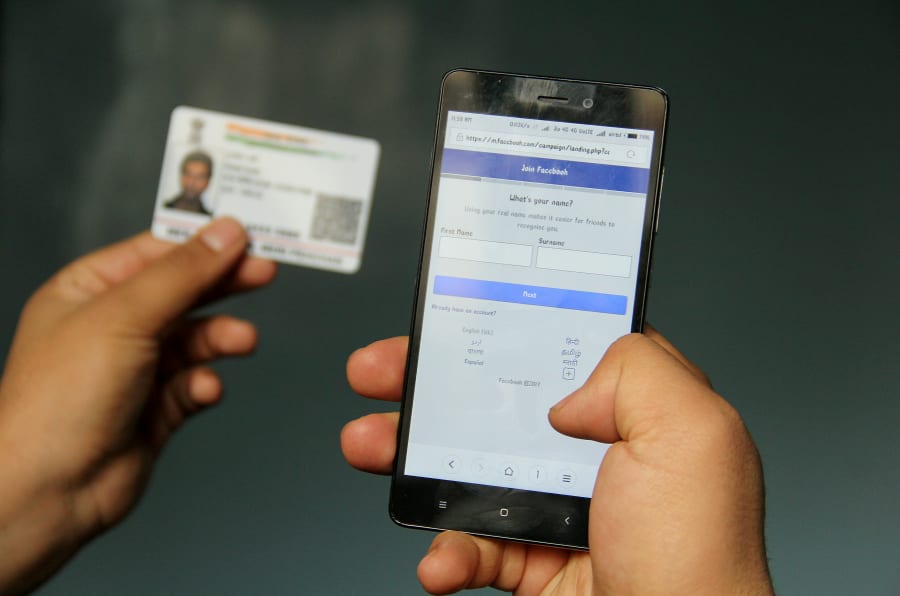 The public interest litigation (PIL) that led to the contentious central government decision to make it mandatory for millions of Indians to link their mobile SIM cards to their Aadhaar numbers was filed by an organisation managed by a petrol pump owner in Gurugram, HuffPost India has found.

Sharad Goel, a 58 year-old businessman and owner of the petrol pump on the Mehrauli-Gurgaon road in Sikanderpur, is also the general secretary of the Lokniti Foundation; a secretive organisation with no website, no presence on social media, and no public list of trustees. Their registered office is a sealed building in south Delhi’s outskirts.

Lokniti’s PILs are often taken up with alacrity by the central government. The Aadhaar-mobile linking is one example. Soon after the petition was heard in court, the government used it to claim that the Supreme Court had made it mandatory to link Aadhaar to mobile phones. In November 2017, RS Sharma, an IAS officer who is the chairman of the Telecome Regulatory Authority of India (TRAI) and also the former UIDAI CEO, wrote about the many benefits of such an exercise using arguments similar to those put forth by Lokniti Foundation in their petition in court.

Another such PIL put forth by the NGO is the controversial DNA profiling bill, which calls upon the central government to create a DNA database of unidentified dead bodies so that it could be used to later trace their identity and help police investigation on missing persons.

In August last year, the central government told the Supreme Court that it would introduce “The DNA Based Technology (Use and Regulation) Bill, 2017” in Parliament.

These many coincidences have led some to question if the foundation is, in effect, acting as a front for the government; a charge Goel vociferously denies.

“Of course not,” he said, with a dismissive wave of the hand.

Retired IAS officers, in the meantime, are worried by the prospect of serving bureaucrats and policemen — like Kapoor — using PILs as a way to shape laws and crucial national policies, which are strictly the prerogative of the legislature.

When HuffPost India reached out to Kapoor for comment, he said he was busy and did not respond to text messages.

“While they are a part of the government, they have ample opportunity to put forward their views.”EAS Sarma, retired IAS officer.

“There are two categories of government servants, where 95% of them are corrupt,” said Ashok Dhamija, Lokniti’s lawyer. “The rest are a few good officers who want to change the system but their suggestions aren’t implemented.”

He referred to his personal experience, where while working for the CBI he had to write a 10,000 words article in a law journal to get certain reforms in the organisation. “As per conduct rules, it is fine to work at an NGO which is not too controversial,” he added.

But controversial is what Lokniti has become.

A Man Of Many Talents

Sharad Goel is, by his own admission, a man of many talents. According to his business card, he is the chief editor of two Hindi publications — a research magazine and a weekly newspaper. He is also the patron of an environmental care organisation, the chairman of his own NGO called Nature International, and the president of ‘International Art & Culture Foundation’. Besides these, he is also an executive member of the Red Cross Society in Gurugram and a ‘Deaf & Dumb Committee’, he told HuffPost India. Lokniti Foundation is not listed on his business card but he is the NGO’s general secretary, confirmed Goel.

He is passionate about fighting what he perceives as wrongdoings. “I believe we should always complain when we see something bad,” he said. “I’ve lost count of the letters I have written to different authorities.”

It all started twenty years ago when he saw an advertisement for a cold cream company quote an inflated number of users of the product. He complained against them and followed it up with every concerned organisation until the offending statistic was taken off-air. Similarly, when a Bollywood song showed an actor muttering an expletive against a police officer, he pursued a complaint in court until the part was beeped out.

He told HuffPost India that he had been associated with Lokniti since its inception in 2008. He said that the NGO had about 20 members, who were mostly bureaucrats and technocrats.

“Since they are still serving members they can’t hold a position,” he said. “There are only two doors to knock for this — the government’s, which is a long route and they have their own interests, and the judiciary’s through public interest litigation (PIL).”

According to a brochure for the Lokniti Foundation, it is a non-profit established “with the primary objective to improve the quality of life of the people in social, political & economic spheres through public policy initiatives, intervention and programs.”

The Lokniti Foundation’s mission, according to the document, is “[t]o be the ears, eyes and hands of the judicial system to create equality in the society.”

Each of the organisation’s initiatives are spearheaded by IAS & IPS officers, and they file RTIs, organise skill training workshops in some Gurugram schools, and provide health services to government schools under the Rashtriya Kishor Swasthya Karyakram of the National Health Mission, according to the brochure.

Lokniti Foundation submitted a PIL in 2016 asking for a “definite mobile phone subscriber verification scheme” that should verify every mobile phone subscriber’s identity and address. According to Goel, the PIL was the fallout of a revelation in the Indian Parliament where the then telecom minister said that 4,82,00,000 mobile SIM cards have false addresses. Concerned that this had serious national security ramifications, the foundation decided to file a PIL.

The government, at the time, responded that it had already launched Aadhaar-based E-KYCs to issue mobile connections. And though it was not mandatory to use Aadhaar cards to get a new mobile connection, since almost 88% of Indians already had the UIDAI document, they would “normally” use their Aadhaar card for a new connection, the government claimed, as it was a faster way than through other documentation, which could take a couple of days. This would minimise the chances of any SIM cards obtained through fraudulent documentation, the Union of India said in an affidavit. A similar mechanism to verify the antecedents of existing prepaid customers will be devised by the government within a year, the Attorney General told court.

Satisfied with the government’s reply, the apex court disposed the petition in February 2017.

However, a month after the petition order, the Department of Telecom (DoT) issued a circular making it mandatory to link Aadhaar to mobile phone connections, claiming it was following the Supreme Court order.

As millions of Indians scurried to follow the ‘directive’, fearing their mobile connections will be made defunct otherwise, it was not until earlier this week that the misinformation spread by the union government for over a year was laid bare.

During a hearing on Aadhaar on Wednesday, a five-judge Constitution bench headed by Chief Justice Dipak Misra pulled up the central government, saying, “In fact there was no such direction from the Supreme Court, but you took it and used it as tool to make Aadhaar mandatory for mobile users.”

For months, AG repeatedly stated to the Court that mobile linking was mandatory due to a Court order in Lokniti. Interim orders were refused and passed despite petitioners’ objections. On the penultimate day of the final hearing, State concedes that the order did no such thing.

The Aadhaar PIL is not the only one that the Lokniti Foundation appeared to have filed that was in line with government objectives. Another PIL, filed by the NGO in 2012, asks the government to create a DNA database of unidentified dead bodies so that it could be used to later trace their identity and help police investigation on missing persons.

Interestingly, a similar system had been suggested by the Central Bureau of Investigation (CBI) in 2007, but no action was taken on this by the Ministry of Home Affairs (MHA), claimed Dhamija, the advocate. The Foundation filed an RTI in the matter and took up the issue in court.

The NGO’s PIL five years later fast-tracked the process, and the matter is pending at court at the moment. In 2017, the government told the Supreme Court that it was drafting a ‘Human DNA Profiling Bill’.

“The government works in a way where the left hand doesn’t know what the right hand is doing,” Dhamija told HuffPost India.

Dhamija said that he was not a part of Lokniti Foundation, but he helped the organisation by charging nominal legal fees as he felt that they were doing commendable work in public interest. “The Indian system is not perfect, and only a few honest government officers are trying to improve it.”

“The Indian system is not perfect, and only a few honest government officers are trying to improve it.”Ashok Dhamija, Lokniti Foundation lawyer.

Though representatives of the Foundation have claimed that through their PIL they wanted the submission of DNA for such a databank to be voluntary — while the DNA of all unidentified dead bodies would be collected, family members of missing persons could decide to give their own DNA on a voluntary basis — the suggestion is similar to how Aadhaar was proposed as a voluntary means of identification, only to be made mandatory for availing various everyday essential services. It also raises privacy concerns — if a family member or relative submits their DNA for public record, it can potentially compromise the entire family’s genetic privacy “for generations“.

It is not uncommon to use PILs to influence government policy, but for an organisation to be largely made up of high-ranking government officers to use this approach is curious. Dhamija claimed it was because it is difficult to improve policy from within the government framework.

But how was it that a coalition of such senior officers serving within the government decided to create a powerful lobby to push these issues in court? And why keep up a veil of secrecy around the group’s members?

“There should be only one document and Aadhaar is the best document proof.”

While it is unclear if the group has any political affiliations, one of the Hindi publications that Goel is the chief editor of — Vichar Parikrama — lists several present and past politicians among its “prominent writers“. This list includes the Bharatiya Janata Party’s Arun Jaitley and Murli Manohar Joshi; the National Conference’s Sheikh Abdullah and Omar Abdullah; the Communist Party of India’s Prakash Karat; the Congress Party’s Saifuddin Soz; and the Samajwadi Party’s Ramji Lal Suman.

Goel told HuffPost India that the magazine is no longer operational, though he still keeps a copy of its articles in a bound file at his office.

So was the connection between Lokniti’s PIL and the government’s efforts to link Aadhaar to mobile phones purely coincidental?

“Yes,” said Goel, but adding in the same breath that the linking should happen as Aadhaar was the most “trustable instrument (sic)”. “There should be only one document and Aadhaar is the best document proof.”

“Everyone should get an Aadhaar — we got one for my grandson within days after he was born.”