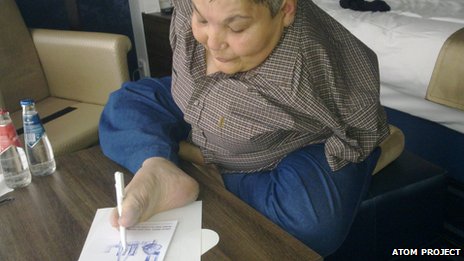 A Kazakh artist who was born without arms says he could not get permission to enter the UK last month because he could not give fingerprints.

Karipbek Kuyukov planned to attend an anti-nuclear conference in Edinburgh.

But he got a letter from the British Consulate in Istanbul saying his “biometrics were of poor quality” and asking him to resubmit his application.

The UK Home Office said his visa was not refused and it may have been the result of a “miscommunication”.

Mr Kuyukov, 44, who was forced to cancel his attendance at the conference, spoke of his disappointment.

“Maybe they did not understand that I am disabled or check the information provided,” said the artist.

“But in my online visa application it was written that I am an artist and that I don’t have hands. I paint by holding a brush in my mouth and between my toes.”

Many thousands of children were born with disabilities during the nuclear test programme.

Mr Kuyukov has used his painting to campaign for nuclear disarmament for the past 20 years.