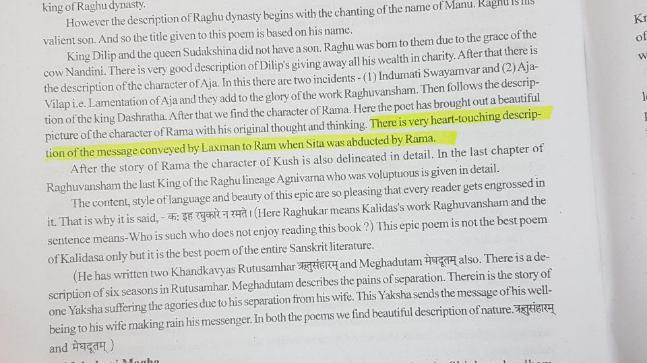 Gujarat State School Textbook Board or GSSTB executive president Nitin Pethani claimed that the word ‘tyag’ has been translated and printed as “abducted” instead of “abandoned” by those who were given the task of translation and proof-reading.

LUCKNOW/BALLIA/HARDOI:  Sita was “abducted” by Lord Rama, says a textbook of Class XII in Gujarat. As the blooper in the English version of Sanskrit subject came to light, the Gujarat State School Textbook Board (GSSTB) today described it as a translation error and ordered an inquiry.

“There is (a) very heart-touching description of the message conveyed by Laxman to Ram when Sita was abducted by Rama,” reads a paragraph giving some basic understanding to students about the epic ‘Raghuvansham’ written by celebrated Sanskrit poet Kalidasa.

This error figures in the textbook meant for English medium students of Class 12.

GSSTB executive president Nitin Pethani claimed that the word ‘tyag‘ has been translated and printed as “abducted” instead of “abandoned” by those who were given the task of translation and proof-reading.

“The word abandoned was replaced with abducted. This is a translation mistake, which is not there in the Gujarati textbooks,” said Mr Pethani.

“We will conduct an inquiry into the matter. If found guilty, we will blacklist the contractors who were given the task of translation as well as proof-reading. We will inform the school teachers to correct this mistake while teaching that chapter,” he added

interestingly, the textbook has been in circulation for last one year, however, the glaring mistake went unnoticed by the education authorities and teachers.

“We have corrected the error on the website copy of the textbook. In case of physical copy, we will inform the principal and the teachers to get the error rectified,” said executive president of GSBST, Dr Nitin Pethani.

Pethani added that the mistake was an outcome of lapse during proof-reading and spell-checking of the text.

In June last year, an error appeared in Class 9 Hindi textbook which described Jesus Christ as a demon.