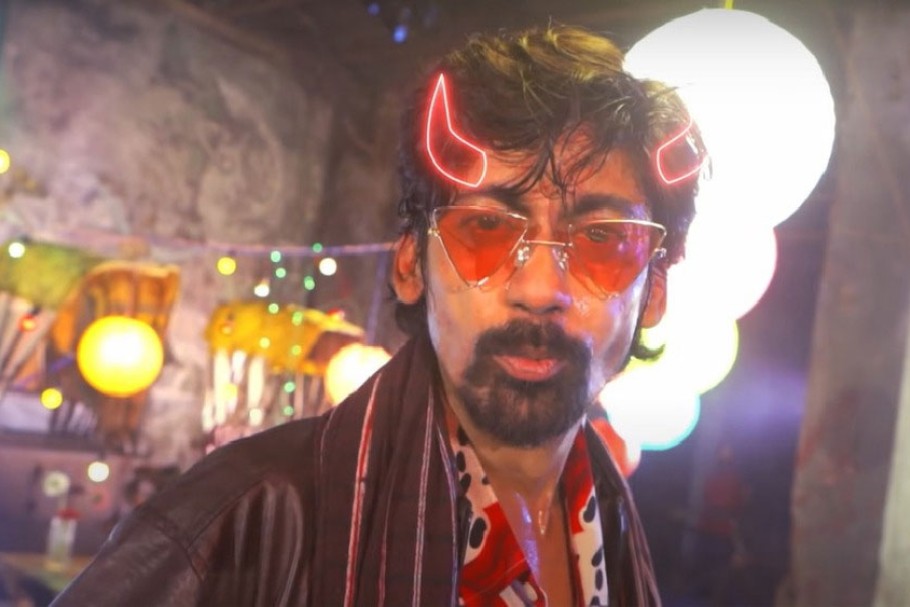 Lyricist and actor Dipangshu Acharya has been accused of perpetrating violence against his female friends and wife. Freelance writer Sreyashi Choudhury, who was in a relationship with Dipangshu between November 2008 and May 2009, took to social media recently to chronicle her experiences.

Meanwhile, Dipangshu’s current wife K*, who has sought divorce from him, also spoke out and alleged him of violence. Dipangshu, who has penned many songs including Kichhu Chaini Ami Ajibon Bhalobasha Chhara sung by Anirban Bhattacharya in Shah Jahan Regency, was recently in the news for his rap in the trending song Tumpa Sona.

K*, a poet and musician herself, came out with her account of how Dipangshu Acharya turned out to be a raging wife-beater with a history of abusing his romantic partners, after Sreyashi Choudhury, a poet, took to the Internet to reveal how Dipangshu Acharya abused her during their relationship between November 2008 and May 2009.

“A couple of months after his abuse, I realised that I cannot be in touch with Dipangshu. Every time I wanted to leave, he pleaded with me to come back. I left for Bangalore, literally to be a metropolis away from a toxic character like him. He made sure to drag me down to Kolkata, threatening me with suicides,” said Sreyashi, adding, “What amazes me the most is that I saw people trying to normalise the violence stating that this happens between couples.

Today, I feel very strongly against it. Dipangshu is a known face of liberal movement in Kolkata and if we make a misogynistic person a hero then there is a problem. Whenever I went to the police, they tried to sort things out ‘mutually’. But his violence never ended.”

Meanwhile, K*, who’s awaiting divorce, has also posted about her experience with Dipangshu online. “I got married on March 1, 2015, and left his house permanently in September 2017 after going through the ordeal of mental and physical violence. Dipangshu threatened to jeopardise our divorce proceedings if I exposed his violent nature. After perpetrating violence, he would get back to me and apologise, saying that he was intoxicated. He sometimes even blamed me saying that it is because of my nature that he became violent. I think these are all excuses. Being intoxicated cannot be a shield to justify violence,” she told us.

In her post, Sreyashi recalls how during this period, Dipangshu Acharya brutally attacked her on several occasions, once even kicking her in her vagina. On another occasion, he ran a door over her nail creating a permanent deformity in it. He once even urinated on the bookstall of a publisher that had published Sreyashi’s work.

In the years since these incidents, much has happened. Dipangshu Acharya is now a rising star of Bengali entertainment, having worked in several mainstream and indie projects. He is known for the viral music video “Tumpa”, a catchy ironic song whose surface when scratched reveals a perfectly bhadralok-ish condescension towards Bengal’s teeming population of working-class youth. With 67 million views, Tumpa is all the rage in West Bengal right now. Sreyashi and S*, however, have not forgotten their scars. While S* is undergoing divorce proceedings with Dipangshu Acharya, Sreyashi took to the scrutinising world of the Internet to share the ordeals she faced when she was with him. Subsequently, several women shared their stories confirming Sreyashi’s version of events.

S*, who cannot speak publicly due to legal complexities, has extended solidarity to Sreyashi, and told her that she was regularly beaten by Dipangshu, her clothes torn and her property destroyed.

Speaking to the author, S* and Sreyashi both noted a culture of romanticising abuse among the perpetrator’s friends. The survivors noted that they too had internalised such ideas, doubting their own convictions and delaying their escape from the abusive relationship.

The accusations by S* have been contested by Acharya’s friends who made statements to the media either dismissing the abuse or shifting the blame onto the survivors citing moments when they hit back verbally or physically to protect themselves. However, these vacuous arguments miss the crucial power difference between S* and Dipangshu Acharya along with the latter’s reported history of serial abuse against his partners.

A colleague of Dipangshu Acharya, Saayoni Ghosh, speaking to Anandabazar, reproduced the why-so-late argument that every survivor is familiar with. “I have known him for a long time. If there really was abuse or torture by Dipangshu, he should face punishment. But whatever we are hearing now is the statement of one side. We can’t say anything from that. Jadavpur women, who are so combative, wrote about a man like this after all this time? Why did they not protest right away?” she asks. (The quote, which was originally given in Bangla, has been translated to English by the author)

However, in her excited outpouring of gaslighting, she forgot to take into consideration that Acharya himself had confessed to abusing his wife via a social media post in 2017 (screenshot attached). In my several years of feminist activism and quest for survivor-centric justice, I have seen abusers and enablers develop ever-innovative methods of excusing themselves but I have never seen a case where a celebrity has openly admitted to abusing his wife brutally, only for his yes-men to still imply that the survivors are lying, thereby functionally nullifying the significance of the abuser’s confession.

K* and I got involved romantically on 4th July, 2014.
We started living together on 1st February, 2015.
We got married through registry on 1st March, 2015.
Overall, we had some good times (I think). She had some small issues with some things I did, I had similar issues with some things she did. Like all other couples.
But because of me, several times our arguments reached such a point which was brutal.
These usually happened at times when I or we were drunk. There have been 2 or three times when I don’t remember what I raised the previous day.
Overall, drunk or not drunk, during arguments, I have raised my hand against K*, created horrific violence. Whatever she has done, she has done to defend herself. I want people to know this other side of me, beyond the mask of a good writer and a talented fellow.
K* is better after returning to her home for now. She hasn’t taken much of a step because of our relationship history.
I want proper legal and social steps to be taken against me. Although this might sound nyaka-nyaka (perfect translation can’t be done, somewhat close to the word “pretentious” or “fake”) at this moment, this is my request.
I don’t want anyone to get involved with me just by seeing my outward mask.
May mine and K*’s friends stand by K*.
I don’t feel like saying anything more.

But the circus of gaslighting did not just stop there. Dipangshu Acharya’s colleague and friend Prasen has gone so far as to inform Bengali media that he is shaking with laughter as he thinks this whole business has been orchestrated by Dipangshu himself to play a prank. Imagine the intellectual poverty at the core of a man who, despite the existence of a confession, multiple accounts of witnesses and survivors, has the gall to claim that all of this is an elaborate scheme devised by the perpetrator. Imagine the sheer misogyny of the man who desires to rob them of that agency by locating call out in the naughty schemes of his perpetrator friend and not in the simmering anger of a generation of women artists who have rebelled against the sacred artistic notion that a passionate heterosexual relationship requires liberal doses of domestic abuse to be borne by the woman.

The central problem in the reaction to these revelations is the absolute normalisation of victim shaming in the entertainment industry. While an allegation of domestic or sexual abuse can result in serious financial losses in Hollywood, in India a MeToo accusation simply becomes a minor blip in the abuser’s career, which comes at great personal, professional and psychological cost for the survivors.

The culprit for this dire state is the culture of back-scratching (with its associations of caste and class capital) that exists in our entertainment industries which results in the easy influx of mediocrity in film and other art spaces. Needless to say, such mediocrity will regurgitate stale and rancid articulations of the centrality of a few beatings to romantic passion with the same gusto with which they reproduce clichés in Bengali cinema. The influx of bhodrolok (and bhadromohila) mediocrity is also the reason for Tollywood’s (Bengali entertainment industry) stunted engagement with feminist (as well as anti-caste) thought, praxis and politics.

Dipangshu Acharya himself has blamed his alcoholism several times for his behaviour. But the patterns reported by the survivors are instantly recognisable by abuse survivors all over the world as exhibited by their own abusers, who may or may not have abused alcohol or other substances.

But as an ardent social activist and a supporter of reformative justice, I believe the blatant abuse of the sentiments of reform, empathy and humanitarianism being perpetrated by his apologists is not validated. Further, I believe that unlike millions of dalit, Muslim, adivasi and black men, Dipangshu’s body has not been inherently criminalized by state and society. Acharya’s behaviour is not the function of oppression; it is the function of entitlement over female bodies. He has not been deprived of social justice, education or rights while growing up. And even if he was deprived of sensitization, he has had enough time to catch up.

Dipangshu Acharya has gone on to reportedly threaten his wife with not allowing her the relief of a mutual divorce. Confession aside, such an act reeks of entitlement not only over his partner’s body but also over her mental peace and future prospects. Sreyashi, who fled to Bangalore to escape Dipangshu Acharya’s stalking, once compared him to the pincers of a crab that just won’t let go of its victim.

The question is, how many more women will fall prey to its vice-like grip?