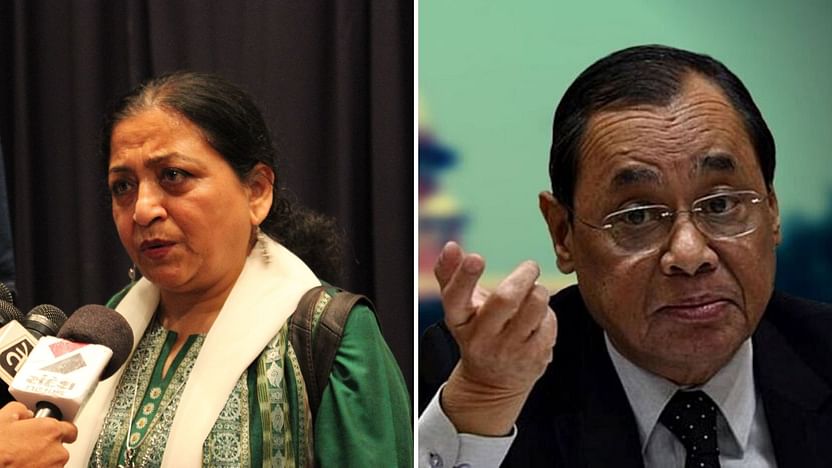 A PIL has been filed in the Supreme Court by Madhu Purnima Kishwar challenging the nomination of former Chief Justice of India Ranjan Gogoi as member of the Rajya Sabha.

Arguing that it crosses a “Lakshman rekha with regard to independence and integrity of the judiciary”, academic and activist Madhu Purnima Kishwar filed a Public Interest Litigation (PIL) in the Supreme Court of India challenging the nomination of former CJI Ranjan Gogoi as a member of the Rajya Sabha, on Wednesday, 18 March.

In the petition, which she has prepared in person – without the help of a lawyer – Kishwar has asked the apex court to:

Madhu Kishwar has filed this petition without any legal representation on the ground that the ‘independence of judiciary’ is an essential part of the basic structure of the Constitution and that it is also considered a pillar of democracy.

In this backdrop, the PIL plea raises concern that,“… his (Gogoi’s) nomination as a Rajya Sabha member by the President of India gives it the colour of a political appointment and therefore casts a shadow of doubt on the credibility of the judgments delivered under his headship of the Supreme Court.”PIL by Madhu Kishwar

It is further added that, “Justice (Retd.) Ranjan Gogoi’s acceptance of RS nomination is all the more befuddling since he himself pronounced that there is a valid “strong viewpoint” that “post retirement appointment is itself a scar on judicial independence of the judiciary”.”

Further, the petitioner has submitted the controversial appointment has led certain sections fodder to cast aspersions on the independence of the judiciary. In this regard, the petition states,

“It has given a handle to the external enemies of India as well as Break Up India Forces within the country to defame and cast aspersions on the highest judiciary of India. This is amply evident from the adverse coverage of this appointment in the national and international media.”

Therefore, the petitioner prays that the appointment of Gogoi as a Rajya Sabha member be stayed.

Further it has been urged that restrictions be placed on granting post-retirement jobs to judges of the Supreme Court an High Courts akin to similar restrictions in the Lokpal and Lokayukta Act, 2013.

The petition makes mention of other Judges who have been appointed / nominated to the Rajya Sabha.”The first recently retired judge nominated to the Rajya Sabha was Justice Baharul Islam, who retired from the Supreme Court in January 1983 and was nominated to the Upper House by the Indira Gandhi government in June 1983. This appointment was also viewed as a slur on judicial independence. Later, ex Chief Justice Ranganath Mishra also secured a Rajya Sabha seat. But he did so by joining the Congress Party and winning his Rajya Sabha seat through election. But even that appointment aroused serious misgivings about judicial integrity among general public.”PIL by Madhu Kishwar

On Monday evening, the Central Government notified that the President of India, Ram Nath Kovind, had nominated Gogoi as a member of the Rajya Sabha.

His nomination drew criticism from various quarters, over concerns whether the same would affect the separation of powers and the independence of the judiciary.

Currently, there are 12 members nominated by the President of India. 11 have already been appointed and the appointment of Former CJI Ranjan Gogoi will complete the list that includes nominated members like Subramanian Swamy, Boxer Mary Kom, Swapan Dasgupta and others.