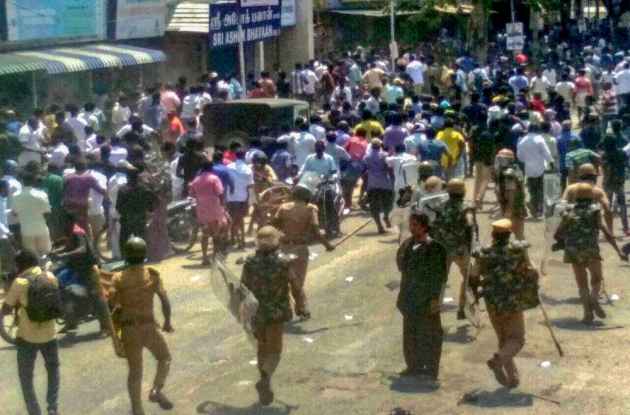 The Madurai bench of Madras High Court on Wednesday stayed the construction of a new copper smelter by the Sterlite copper mining industry in Tamil Nadu’s Thoothukudi.

Twelve people were killed in police firing on Tuesday after protests for the closure of Vedanta group’s Sterlite Copper plant over pollution concerns turned violent in Tamil Nadu’s Tuticorin, with the police action drawing opposition criticism.

Chief Minister K Palaniswami confirmed reports about the death of nine people in “police action”, while reports claimed many, including policemen, were injured in clashes.

Palaniswami announced a compensation of Rs 10 lakh to the families of each of the deceased, and ordered judicial inquiry into the violence.

The protests were going on in Tuticorin for over three months now, but violence erupted Tuesday with agitators fighting pitched battles with police, prompting it to open fire.

Palaniswami said in a statement in Chennai that the protesters took out a procession towards the collectorate in defiance of the prohibitory orders clamped in the specific area in Tuticorin.

Hurling stones and setting government vehicles and public property on fire, the agitators went on the rampage in the town, about 600 km from Tamil Nadu capital Chennai.

Police said nearly 5000 protesters gathered near a local church and insisted on taking a out a rally to the district collectorate after they were denied permission to march to the copper smelter plant.

Many were injured in stone-pelting by the agitators, who also set some vehicles on fire. Windscreens of some government cars were smashed and bank premises were attacked by the rampaging mobs.

“The police had to take action under unavoidable circumstances to protect public life and property as the protestors resorted to repeated violence… Police had to control the violence,” Palaniswami, who holds the Home portfolio, said.

Reinforcements have been rushed from neighbouring districts to Tuticorin to assist the local administration in restoring normalcy.

India - This too is Emergency: Why are we silent?
Bhima Koregaon Commission gets 7th extension; to submit report before Dec 31
One in three prisoners in Tamil Nadu is Dalit
PUCL Statement on Communalisation of the Coronavirus Pandemic and hate crimes against Muslims and ot...