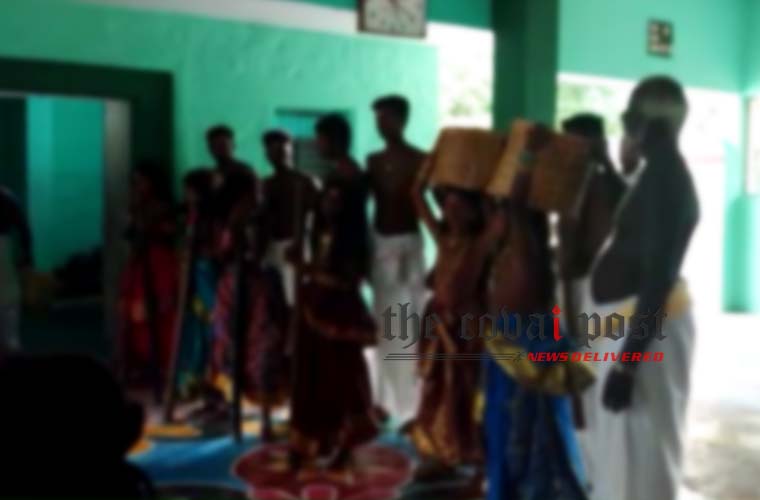 Vellalur (Madurai district): A bizarre ritual of making girl children in the stage of attaining puberty into objects of divinity among a section of caste Hindus in a village in Madurai district has opened a Pandora’s box.

Under this practice, in vogue for centuries in Vellalur, 7 girls in their teens and pre-teens are bequeathed to their village deity Yezhaikaatha Amman every year to bring what village elders claim progeny and prosperity.

But what is shocking in this disturbing religious exercise is the bunch of innocent girls, aged between 10 and 14, is made to live inside the small temple for as many as 15 days – all decked up in jewels and more shockingly with no upper garments.

The process of selecting the 7 girls to be ‘offered’ to the deity for a fortnight begins on the last Tuesday in the Tamil month of Aavani every year. Scores of adolescent girls – all from the same community hailing from 62 villages – wearing silk sarees like wrap-around skirts and gold ornaments and with no blouses to cover their developing breast buds are paraded in front of the Yezhaikaatha Amman Temple at Vellalur. In the presence of a large number of men and women, the priest handpicks 7 of them. For 15 days from then, the girls dressed in the same fashion stay in the temple under the care of the priest.

“I select them without any bias and with the blessings of the deity. I am their caretaker for 15 days,”says M.K.Chinnathambi, the 7th generation priest of the temple. “The men from these girls’ families stayput on the premises at nights to ensure their safety and security. In the mornings, women from their families visit them. By Amman’s grace, nothing untoward has happened so far,”claims a village elder.

The 7 girl children are away from school for all these 15 days to undergo this strange ritual. “I am studying 8th standard in a school at Uranganpatti and I have taken leave now,”one of the kids said. “Exams are going on, but we will be exempted as we will produce medical certificates,”another said before being chased away by the priest for talking to this correspondent. Of the 7 kids chosen this year, 3 are in class VIII, 2 are in class VII and another 2 are in class V.

This practice of “seeing divinity in little girls” woos hundreds of people from far and near on the last day of the festival when they are made to walk with madhu kudam (pot containing a kind of beverage prepared from rice) on their heads to another temple in a neighbouring village.

A village elder says that they have been adhering to this practice, unique to Vellalur naadu (comprising 62 villages), since time immemorial. “Those girls who have attained puberty are not eligible for this ritual that is based on a belief that 7 little daughters of a woman became lifeless stones after she prevented her childless elder sister of the region from seeing them. Our families are blessed with offsprings only because of performing this ritual dutifully to the Amman. It appeases her,” he claims.

Every year a new batch of girls from seven different clans from within the community would be picked for the ritual. Some of these children feel embarrassed that they use their long hair to cover their breasts to avoid stare. There are also, according to a village woman, instances of little goddesses crying unconsolably in fear of being away from home when they are chosen by the priest for the ritual.

But none of these girls, as per The Covai Post’s investigation, has been asked whether they would like to undergo the ritual or not. None has been psychologically profiled too. Their psychological trauma caused by the embarrassment has not been taken into consideration at all. They have been made to simply oblige the diktats of their parents and village elders.

A mother of one of the girls who have been bequeathed this year has no remorse when questioned about how her daughter who is showing the signs of puberty, would be feeling to stay in a place other than her house with no upper garment. “She is a goddess for us now. How could you even think wickedly?,” she retorted in anger. “It is Amman’s will that she should be bequeathed to Her this year. We are honoured,” she added.

Oblivious of their physiological changes, these children either in puberty or pre-puberty stage remain gullible and hence are made prone to exploitation under the ruse of religious practice.

Here is the evidence for the manner in which the priest selects 7 girls from among many. It was presumably shot in 2015 during the first day of the Vellalur temple festival

Maharashtra - Farmer suicides - 487 in 2 months , 1088 in 2015
Jharkhand- Where have all the missing girls gone ? #Vaw
Sister Lucy, who joined protest with nuns in Kochi, banned from church activities #WTFnews
The independence of the judiciary has collapsed: Prashant Bhushan