Maharashtra: 20 farmers in Yavatmal die due to pesticide poisoning, more than 700 in hospital

A farmer leader alleged that more than 700 farmers have been hospitalised while 25 have lost vision due to infection caused by spraying poisonous pesticides in Yavatmal district of Maharashtra. At least 20 farmers have died in Yavatmal district of Maharashtra after inhaling poisonous pesticide. Photo for representation: PTI.

At least 20 farmers in Maharashtra’s Yavatmal district, which falls under drought-prone Vidarbha region, have died allegedly after inhaling poisonous pesticides.

A farmer leader alleged that more than 700 farmers have been hospitalised while 25 have lost vision due to infection caused by spraying pesticides. “Farmers are getting no relief, instead they are losing their lives like this. We will drag this matter to the court,” said Devanand Pawar, a farmer leader.

Chairman of Maharashtra government-run Vasantrao Nail Sheti Swavlamban Mission (VNSSM) Kishor Tiwari said an investigation will be carried out into the reports of pesticide poisoning and if chemicals are found to be toxic beyond the permissible limit, their use can be banned.

“Farmers are not taking necessary precautions. They should cover their faces and avoid spraying when there is intense heat,” said the VNSSM chief. VNSSM, a task force on agriculture, proposes to provide new crop loans to all farmers in 14 farmer suicide-prone districts of Vidarbha and Marathwada regions in the state.

EVERYTHING YOU NEED TO KNOW ABOUT THE FARMER DEATHS IN YAVATMAL DISTRICT OF MAHARASHTRA: 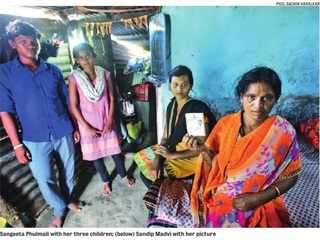 After 19 farmers died due to inhaling of poisonous fumes during spraying of pesticides in Yavatmal, Mirror visits families of 3 victims who are trying to cope with the loss

In Yavatmal, an inadvertent casualty of the use of pesticides is the farmer.The area, which had acquired notoriety for suicides of cotton farmers, is now back in focus after the death of 19 farmers due to inhaling of poisonous fumes during spraying of pesticides in fields.

The government responded in the expected fashion — state banned unregulated sale of the chemicals such as plant growth regulators (PGR), flower bloomers and `stickers’ (added to a mixture of insecticides, PGRs and flower bloomers to ensure it clings on to the plants), which were used by the farmers on the advice of krishi seva kendras (KSK), and further announced compensations of Rs 2 lakh for the dead. Meanwhile, the question on everyone’s lips is, was the tragedy avoidable?

“The agriculture department is supposed to have village level krishi sahayaks (agricultural assistants), whose duty is to advise farmers on the of use fertilizers, pesticides, insecticides and other agriculture inputs in safe and correct manner. But in many villages, they are either absent from duty or their posts are lying vacant,” said farm right activist Kishore Tiwari.

Of the 19 people who have died so far, 10 are daily wage labourers with no other source of income.

Mumbai Mirror met few of the families who either lost their earning members or have relatives still battling for life at Yavatmal’s Vasantrao Naik Government Medical College.

`Was told compensation only for land owners’ Devidas Madvi, 52 Survived by: Wife, 2 children

Will money bring back my husband?
-Wife of Gajanan Phulmali

In August, Devidas Madvi,52, a daily wage labourer from Kalam village, became the first reported death due to insecticide poisoning.”My father used to earn around Rs 250 to Rs 300 per day as daily wage worker and for pesticide sprinkling, he was even given Rs 350 per day. He did this work constantly for 15 days or so before he started showing signs of trouble,” said Sandeep, 25, who works as a painter. On August 7, Madvi was admitted to a primary health care centre in Kalamb when he complained of vomiting, loose motion and fever. Though he was shifted to Yavatmal’s medical college the next day as his condition became worse, he died 12 days later. A post-mortem report called the cause of death as “insecticide poisoning” but Sandip said the doctors did not tell them exactly which pesticide caused his father’s death.

Sandip has not heard about the compensation announced by the government.”I was told that only land owners were eligible for it. So I never applied,” said Sandip.

`Will money bring back my husband?’ Gajanan Phulmali, 52 Survived by: Wife, 3 children

Sangeeta, the widow of Gajanan Phulmali, 52, is worried about how to pay for the education of her three children – the eldest, Pratiksha, is doing a nursing course, the second one, Dhammaraksha, is doing her graduation, and the youngest, Rithik, is in Class XII. Hailing from Savargaon village in Kalam tehsil, the Phulmali family went through its worst nightmare when its patri arch’s health worsened.

“We own three acres of land and my husband was a cotton farmer. It was the third day of sprinkling pesticide in our field when, after coming back from work, my husband complained about vomiting, convulsions and loose motion. We rushed him to a doctor who directed us to Yavatmal’s medical college. Despite being rushed there, he died 10 days later,” said Sangeeta.

The family has heard about the compensation package but Sangeeta, for now, is grieving. “Is it going to bring back my husband? Or the loving father to my three children?” she said.

`Will have to send kids for work’ Bandu Sonule, 43 Survived by: Wife, 2 children

Geeta Sonule, 35, widow of Bandu Sonule, is fed up of the stream of high-profile visitors, who keep interrupting the family which is in mourning, at their residence in the Manavali village in Ghatanji tehsil.

“While all those who have come have assured us of help, nothing has materialised so far,” said Geeta.

She is planning to discontinue the education of his son, Sourabh, who is class XII, and daughter, Pooja, who is class IX, and send them for work, to make ends meet.

On Friday, she was visited by state’s agricultural minister Pandurang Phundkar and few days before, by leader of opposition Radhakrishna Vikhe-Patil. MLAs, MPs and other local politicians and mediapersons are seen making a beeline on a daily basis, she said.