Maharashtra – 40% cut in gender budget allocation, although 48% of women in the state are anaemic 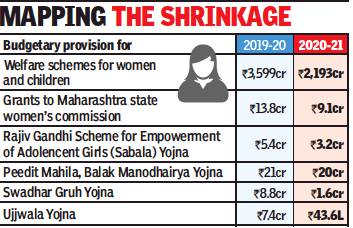 Even as the Maha Vikas Aghadi (MVA) government aims to bring in a stringent law to curb cases of crimes against women, it has reduced the budgetary allocation for women and children welfare schemes by as much as 40% for the coming financial year.

The Gender Budget statement for 2020-21 was tabled in the state legislature on Saturday. While on one hand the statement expressed concerns over the steady rise in crimes against women, on the other, merely 1.8% or Rs 7,379 crore of the total state expenditure of over Rs 4 lakh crore has been allocated for their welfare in 2020-12.

Shambhuraj Desai, junior minister for finance, tabled the Gender Budget statement in the legislative council on the last day of MVA’s first budget session. It also referred to a National Crime Records Bureau report that Maharashtra recorded the second highest number of crimes against women in the country between 2016 and 2018.

Professor Vibhuti Patel at Advanced Centre for Women Studies, TISS, said, “Government grants are not being released for women’s study centres, which are being shut down.” Drawing attention to the fact that women make up 5.2 crore of the state’s 11.2 crore population, Patel said not just the state, even the union government should hike budgetary provisions.

He said women are still not given the status of “fa farmers”. They are deprived of ownership of vital documents without which they cannot avail of government schemes or subsidies.

48% of women in Maharashtra are anaemic, says gender budget

As many as 48 per cent women in Maharashtra are anaemic, the percentage of child marriages stood at 26.3 per cent while teen pregnancies were at 8 per cent, the gender budget of the state tabled in the Legislative Council on Saturday revealed.

It was the first time the state government released a gender budget statement, which also had details of fund allocation for various projects concerning women and child development.

The Maharashtra government presented its maiden gender budget statement revealing expenditure for women at Rs 7,379 crore, which is 1.82 per cent of the total budget outlay of Rs 4,04,385 crore.

Out of Rs 7,379 crore budget estimate, a sum of Rs 2,613 crore will be directly for projects concerning women, while Rs 4,766 crore would be for schemes that would benefit them indirectly. The statement disclosed that crimes against women were steadily increasing, while, as per the National Crime Record Bureau, Maharashtra recorded the maximum number of missing women complaints in the country. “In calendar year 2016, 28,316 women went missing. The figures increased to 29,279 in 2017 and 33,964 in 2018,” said the report.

Quoting a 2018 McKinsey Global Institute report on ‘Advancing Women’s Equality in Asia Pacific’, the statement said, “Participation of women at professional and technical jobs in the state is at 46 per 100 men. Financial inclusion of women stands at 47 women per 100 men.”

The odds against coal — and Adani
#India - Lets ALL Resolve for FREEDOM from VIOLENCE AGAINST WOMEN this New Year #mustshare
Farmers of Bujbuja Village warn the Govt. ; Funeral pyres set up for self-immolation
India - Outlawed practice of manual scavenging sees a fourfold growth