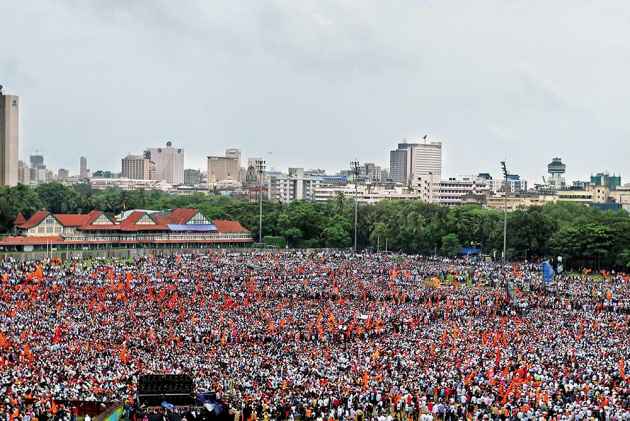 Come August, and there’ll be one more—a massive, silent rally in Mumbai’s Azad Maidan, the 58th running under that banner. Through the second half of 2016 and spilling over, lakhs of young boys and girls have marched silently with placards in their hands, dressed in black, all over Maharashtra. The Maratha Kranti Morcha protests had three demands: justice in the barbaric Kopardi rape case (where, in an inversion of usual narratives, the guilty were Dalits and the victim was a minor Maratha girl); reservations for Marathas; and abolition of the SC/ST Atrocities Act. Today, all three are live, hot-button themes. But more than that, the whole phenomenon taps into something more: a raw, deep anger, a disquiet.

Anyone would have noticed: it’s been an unusually rich harvest of agitations for Maharashtra of late. Anger seems to be growing in abundance in those parched fields. Frequent protests, of all shapes and sizes, have become the norm—alm­ost as if, together, they manifest some collective deficit in the lives of people. Count the numerous Maratha morchas, the sangharsha yatra of farmers, Dalit protests opposing violence at Bhima Koregaon, protests after the Elphinstone Road railway tragedy, protests by railway apprentice and MPSC aspirants, by ang­anwadi workers, by students at the Tata Institute of Social Sciences (TISS), and now the latest, the Kisan Long March that caught the nation’s eyes. It’s striking how they sometimes overlap, sometimes compete, and always seem to straddle economics and politics—how unmet promises on the MSP, for instance, may fuel an assertion of caste identity.

The Kopardi guilty are now in jail, awaiting death—their fate will be matched against that of others. The call for quota will be heard again at Azad Maidan. Though it’s a distant dream, the clamour can be expected to not lessen in the 18-month run-up to the next assembly election. And there’s already a protest brewing over the dilution of the SC/ST Atrocities Act. It’s the way one protest segues into the next. Is it time for Maharashtra to introspect? It’s always been a vanguard state, far from the darkness of the northern Bimaru belt, even if a hundred miles outside Mumbai things could be as bad. But are economic indices suddenly so depressed as to cause multiple strains in society?

For example, the Maratha morchas signalled tremendous frustration among the rural youth because of the agrarian crisis and lack of employment. “Youth have realised livelihood chances are shrinking in agriculture and they have no access to higher education. If they sell their land, they are pushed further into poverty. We are seeing an increase in migration and in the duration of migration too,” says activist Ulka Mahajan. Though the state’s literacy rate is above the national average, rural access to higher education is half that of urban, leaving most of them dependent on agriculture. If that doesn’t work, they migrate to the nearest town.

The Maratha morchas signalled tremendous frustration among the rural youth because of the agrarian crisis and lack of employment.
“There’s a widening gap…the number of students versus affordable higher education,” says Prof Brinelle D’Souza, Centre for Health and Mental Health, TISS. “With privatisation of education, economically deprived students remain outside the ambit. That’s why protests by students and youth are on the rise.” Anil Shidore, leader of the Maharashtra Navnirman Sena, which focuses on youth, agrees: “It has been difficult to get data in the past three-four years, but I see the problem of underemployment, where a PhD scholar works at a mall, a gap bet­ween young people and required skill-sets, given how technology is taking over.”

It appears difficult to believe a state with a higher per capita income than the national average and heavy FDI in its industries is having problems—ranging from the highest-ever public debt to una­bated farmers’ suicides. But the urban-­rural gap, with India’s financial capital Mumbai at one end, explains that. The state’s Economic Survey 2016-17 used some stark numbers from 2012 to flesh out the gap. Maharashtra’s human development index (HDI) that year was 0.752. And 27 districts had HDIs lower than that, with Nandurbar the lowest at 0.604, while Mumbai sat pretty at 0.841.

In 2017-18, Maharashtra’s revenue deficit stood at Rs 4,500 crore and public debt at Rs 4 lakh crore. Analysts doubt how much money can be put into the social sector and agriculture this way. It’s also becoming clear several projects ann­ounced during Make in India and Magnetic Maharashtra will take years to attain fruition. The failure to retain Foxconn, touted to create 50,000 jobs with a $5 billion investment, is a big blow, though the state still ranks high on ease of doing business. To add to that, real est­ate in Mumbai dropped by 27 per cent, following demonetisation and MahaRera.

So the cream on top is thinning at the same time as the base. “Maharashtra has extreme intra-state regional inequality and disparity,” says economist Ajit Ranade. “It is 45 per cent urbanised. While agriculture contributes up to 11 per cent of the state’s GDP, it employs over 50 per cent of its working population. Of those, 50 per cent are said to be either landless or have small parcels, which means they have no access to bank credit or many government schemes.”

Low public spending in agriculture is bad news in a state with only 18 per cent irrigation cover (other prosperous states have up to 40 per cent).
Once an anomaly exists, it feeds on itself and grows. For Ranade, it’s absurd that a drought-prone state should rely so heavily on “water-guzzling sugarcane”—which, in fact, has shown a 43 per cent increase in crop area. “Not to mention, the state’s political economy is closely tied to sugarcane,” says Ranade. “Job creation is required, but it needs to be in labour-int­ensive industries such as agro-processing, textiles, construction and tourism. We should have end-to-end textile parks in Vidarbha or appr­opriate development of coastal tourism along Konkan.”

Agriculture is a mess. Drought was a running curse this decade. But last year, good rainfall and a bumper crop (22 per cent growth) came as a bane—with price crashes and procurement delays. This year, with rainfall only at 84 per cent of normal, the state registered a negative 8 per cent growth! That’s on the back of a near-double-digit reduction in the output of vegetables and various crops. Measure that against the other statistic: 2,414 suicides from January to October 2017, the Rs 34,000-crore loan waiver not safety net enough. How that loan waiver will be financed is another question.

“Peasants and workers have been the worst affected of neoliberal policies,” says Ashok Dhawle, president, All India Kisan Sabha, which organised the Long March. “It’s been accentuated in the past four years. Public investment in agriculture has dropped all around. In the past few years, allocation of res­ources has dec­reased in agriculture and other social sectors such as education and health.” The crisis is acute in non-­irrigated reg­ions of Vidarbha and Marathwada—low public spending is bad news for a state that has only 18 per cent irrigation cover (other prosperous states have up to 40 per cent). Worse than the vagaries of nat­ure are the ­vagaries of credit. Corporate or richer farmers corner the benefits of banking and poor farmers borrow at a soul-crushing 36-60 per cent.

All this is what gets articulated in a near-permanent atmosphere of restiveness. There’s a whole ecosystem of protests, which allowed even senior BJP dissident Yashwant Sinha to participate in an agitation, ostensibly to protest ­erratic electricity bills on farmers, while seeking to make a political point. Even the CPI(M) used the recent Long March likewise. Right now, over 2 lakh ang­anwadi works are striking to get a salary hike. The government’s attempt to slap MESMA on them has met with further protests. While their work is crucial to addressing malnutrition among rural children, they are paid not more than Rs 6,500 per month.

Political experts and activists are looking at an intensified period of civilians getting down on the roads and ­highways to be heard.
“The discontent is highest among workers, the blue-collared and the peasants. This is because manufacturing is down everywhere—be it on farms or factories. The white-collared middle class emp­loyed with the service industry or in government jobs are not complaining,” says senior journalist Kumar Ketkar.

“These agitations are also an indication of political negotiations,” says Dolphy D’Souza, member of Citizens for Justice and Peace. “We are going into election year and this is perhaps the only chance to be heard. The government has not del­ivered on its promises and the Opposition has not helped either. Moreover, there is a limit to how far civil society protests will go. I see that the protests will intensify, but the worry is increasing polarisation. It has already happened between Marathas and Dalits.”

It’s obvious that sundry political parties will mobilise some of these protests, but what may come of it is a matter of speculation. Since the parties are themselves in survival mode, with nervous leaders defecting every now and then, political experts and activists are looking at a bleak but intensified period of civilians getting down on the roads and highways to be heard. The next one is around the corner: an agitation to protest insufficient compensation in the crop insurance scheme, at Parbhani on April 9.

By Prachi Pinglay-Plumber in Mumbai