In the recently concluded elections to Buldhana Zila Parishad, it was reported that at Sultanpur polling station, LED lamp of lotus symbol would flash whenever anybody voted for the coconut symbol. 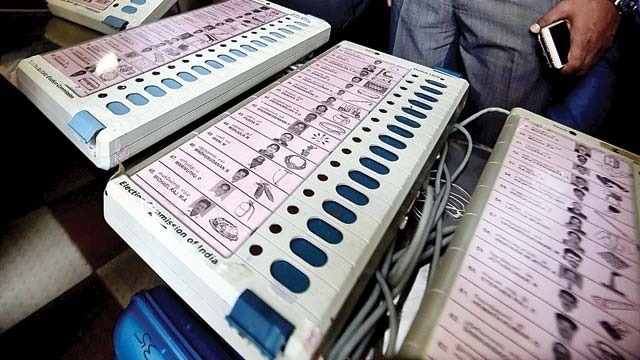 Mumbai: Despite Election Commission of India’s repeated claims that Electronic Voting Machines (EVMs) are foolproof, information obtained through an RTI on Saturday revealed a case of an EVM “malfunction” in Maharashtra.

In the recently concluded elections to Buldhana Zila Parishad, it was reported that at Sultanpur polling station, LED lamp of BJP’s lotus symbol would flash whenever anybody voted for the coconut symbol, which was being used by an independent candidate.

The District Collector, who was informed of the erring machine by the Returning Officer (RO) in his inquiry report, furnished this information in an RTI reply to activist Anil Galgali.

The query was filed by Galgali before the Buldhana Collector’s Office seeking information in relation to a complaint registered by Independent candidate Smt Ashatai Arun Zore.

“The Buldhana collectorate’s election department replied that at polling station No. 56 in Sultanpur of Lonar town, when the voter pressed the Independent candidate No. 1’s coconut symbol, the LED lamp flashed against the BJP candidate No. 4’s lotus symbol, signifying that the vote had gone to the latter,” Galgali explained.

The complaints were further looked into by booth in charge Ramnarayan Sawant, who brought the malfunction to the notice of the Election Returning Officer, Lonar.

After receiving repeated complaints, the Assistant Returning Officer, Lonar, visited the polling station. He verified that while pressing a particular candidate’s button, the lamp for candidate No. 4 (BJP) would glow.

The election was cancelled in that booth after the reports of various election officials were sent to the Collector. The polling station was then closed, the “malfunctioning” machine was sealed and a standby unit was put into operation.

However, after demands by several parties, a repoll was conducted after five days on February 21, the RTI revealed.

“This case conclusively proves an ‘EVM fraud’,” Galgali said. “It was brought to notice by a voter, confirmed by many other voters, the RO and other officials also reconfirmed it and sent a report to the Collector,” he added.

Strangely, he said the EC had consistently denied any EVM fraud and even asked the political parties to prove “managed EVMs” by organising demonstrations.

“In order to avoid such repetition in future, the EC must consider alternatives to the EVMs which can be tampered with,” he said.

fter the declaration of assembly poll results of Uttar Pradesh, Punjab, Goa, Manipur and Uttarakhand, some parties had raised concerns over the credibility of EVMs used by the EC and had alleged tampering of the machines during the elections.

In April, 13 parties had met the Commission and had urged it to revert to the old ballot paper system. After an all- party meet on the issue, the poll panel had organised a challenge to tamper with its EVMs. But no political party took part in the June 3 challenge.

(with inputs from IANS)

Did RSS Participate in Freedom Movement?
#Goodnews- Renewal of Posco MoU held up on failure of ‘milestones’
CNN physician-journalist poses ethical dilemma after treating Nepal victims
Taming #Aadhaar - An epic battle has been won with #PrivacyVerdict but the war isn’t over