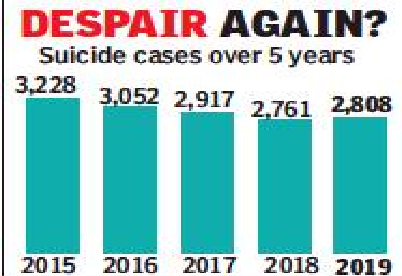 The declining trend was broken in 2019, which was a harsh year for farmers in the state. The arid Marathwada region had a rain deficit in the monsoon and western Maharashtra was lashed by floods in July-August which damaged 4 lakh hectares of crop. And just when the kharif harvest was underway, unseasonal rains struck, impacting 93 lakh hectares of crop. The Maha Vikas Aghadi government, which took charge in November 2019, declared a new loan waiver a month later.

Vidarbha tops with 47% of suicides

Of the 2,808 cases reported in 2019, the highest was from the cotton belt of Vidarbha, which accounted for 1,286, or 47% of the suicides. Marathwada recorded the second highest number, 937. North Maharashtra reported 491cases while the sugar belt of Western Maharashtra reported 93. The Konkan had only one case.

Activists say that beyond loan waivers and compensation for crop loss, the state needs to make farming more profitable. “The cost of farming inputs and labour is so high that a farmer cannot survive a bad season. The economics of farming are tilted against farmers,” said Vidarbhabased activist Vijay Jawandhia.