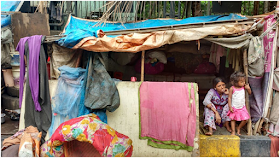 By Our Representative
The most awaited monsoon may have knocked the doors of Mumbai, bringing cheers on the face of the city dwellers. But the rains are proving to be a curse to nearly 60,000 homeless persons, especially infants, the sick and the aged. A right to information (RTI) reply has revealed that, despite clearcut official guidelines, the government has not cared to build 124 community shelters to protect them.
The response received to the RTI plea by the Ghar Bachao Ghar Banao Andolan (GBGBA) has revealed that, while there are seven night shelters in Mumbai, not one of them has been built by the Municipal Corporation of Greater Mumbai (MCGM) as per the National Urban Livelihood Mission (NULM) guidelines.
While one of them – in Byculla – has been vacated because of its “dilapidated” condition, in rest of the six, near Alankar Cinerma, in Byculla, near Wandhede Stadium, in Bandra West, in Andheri East and Malad East, there is a total capacity of just 320 persons.
Revealing this BGBNA, an affiliate of the National Alliance of People’s Movements, led by social activist Medha Patkar, has said, “As per census of 2011, there are 57,416 homeless persons in Mumbai. The guidelines laid down under the NULM of the Ministry of Housing and Urban Poverty Alleviation states that there should be a permanent community shelter for every one lakh population.”
It adds, “Mumbai has a population of 12,442,373 as per 2011 census. As per the guidelines, there should be at least 124 community shelters. But it seems that neither the Maharashtra government nor the MCGM is bothered about risk of life the homeless may face during rains in the absence of any shelter.”
“It is startling to know that not a single rupee has been spent so far by the Maharashtra government”, the statement says, adding, “Prem Kishore Gaikwad, mother of a girl child, in her twenties, has been living on pavement since her parent died twenty years back. She cleans the gutters throughout the year except rainy season when they switch their job to rag picking.”
BGGBA quotes Gaidwad as saying, “I have built a temporary roof of plastic on the pavement but it leak badly during the rains, so, we move to sleep under the nearby bridge”. Adds GBGB, “Her pavement dwelling along with more than 20 families is located at Santa Cruz Highway.”
It further says, “The recent release of Development Plan of Mumbai has again reignited this discourse and various civil society groups sending suggestions and objections so as to make sure that maximum space remain in public domain and allotted in the interest of people with special focus on poor.”
Referring to “clear ruling from the Supreme Court which has made it mandatory for the state governments to construct shelter for homeless”, GBBGA says, “In a latest affidavit filed by Under Secretary to the Government of India, (MHUPA) in the Supreme Court, it is revealed that a total amount of Rs. 15272.72 lakh has been allocated to the Maharashtra state in the current fiscal year to construct permanent shelters.”
According to BGBGA, “In this contest the poor, especially the homeless lag most behind. They are least heard because there is no legislation which ensure them their ‘right to shelter’. This allows Governments to easily shed their responsibly towards its homeless citizens.”
GBGBA demands, “We urge to the Maharashtra government as well as the MCGM to look into the matter with utmost urgency and provide all the possible relief to the homeless living in Mumbai keeping in mind the possible risk to life during rains.”http://www.counterview.net/2016/06/maharashtra-govt-unwillng-to-build-124.html?spref=fb&m=1