Maharashtra – How prisoners are being kept waiting for basics 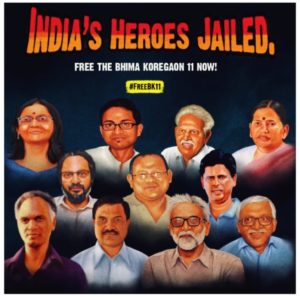 From sippers and sweaters to mail and mulaqats,

Letters from wife? Rejected. Sipper for Parkinson’s patient? Court hearing awaited. Warm clothes to deal with the capital’s chilly temperatures? Allowed but after a long wait.
Many a political prisoner in Maharashtra and Delhi has been struggling for access to basic necessities these last few months. Often, it is many months before their smallest request receives a hearing, forcing one lawyer to compare the process to a badminton match with “shuttlecocks” being lobbed from one authority to the other.
So moved were some Indians by the plight of arrested activist and Jesuit priest Father Stan Swamy who has been asking for a straw and sipper for 20 days because Parkinson’s makes the 83-year-old hands shake too much that they ordered the items on e-commerce sites. While there is no telling whether they will reach him or not, there are others who are facing similar challenges.

Take the case of 53-year-old Prof G N Saibaba, who is serving a life term in Nagpur Central Prison. In October, he went on a 10-day hunger strike seeking access to his medical records, his wife’s letters and books in Telugu and permission to go out of the “anda cell” where he has been kept in isolation. His wife Vasantha Kumari says she found out about the hunger strike on November 6.
“We kept asking for emergency calls or any communication as we did not know about his state of health,” she says. Saibaba suffers from 90% disability and 19 medical conditions, including acute pancreatitis, impacted gall bladder-stones and paralysis in his arms. Since his arrest in February 2017, his appeals for bail and parole (to attend his mother’s funeral) have been denied.

Lack of access to medical information or treatment is a common refrain amongst relatives of those imprisoned like Bhima-Koregaon violence accused DU prof Shoma Sen. Prof Sen’s daughter, Koel, is constantly worried about her mother’s health since she suffers from osteo-arthritis and her glaucoma has worsened. “I know that she is in a lot of pain and limps while she walks,” she says. “When she was in prison in Pune, we were able to provide a plastic chair and a portable commode. There were a few visits to the hospital for eye tests but since she has been shifted to Byculla jail (in Mumbai) this February there have been no hospital visits,” Koel says.

For Father Stan, also accused in the caste-based violence at Bhima Koregaon, the wait for a sipper has been extended by the court to December. “The tremors in his hands make it very difficult for him to hold anything steady so a sipper is essential,” says Father David Solomon, his Jesuit colleague.
The National Platform for the Rights of the Disabled has raised the issue of both Fr Stan and Prof Saibaba’s special needs but to no effect. NPRD’s Muralidharan says, “There is a need for jail reforms but no political will to implement them.”
Maharashtra ADG of police (prisons and correctional services) Sunil Ramanand denies that there is any neglect in treatment of prisoners. “Whatever is admissible under the law is being provided to prisoners. Fr Stan has been given a sipper. Some of prisoners are old and have co-morbidities and we are mindful of that. We are in constant touch with their families,” he says.
Earlier this month, several accused in the Delhi riots case petitioned the court asking that families be allowed to provide warm clothes. When jail authorities refused to accept the clothing, families were forced to approach the court delaying the process by over a month. At least, one prisoner fell seriously ill due to Delhi’s biting cold.
Trips to the hospital for check-ups are also not without difficulties. “Every time the prisoner comes back they are put in an isolated area for two weeks. After two weeks, it is time for another hospital visit so essentially the prisoner has been in isolation for several months now,” a family member says.
Former Tihar jail law officer Sunil Gupta says that while the jail manual issued by the union home ministry provides detailed instructions for the diet, clothing and other basic necessities for prisoners, the jail superintendent’s role is pivotal to its implementation. “If a prisoner has to approach the court for basics, the jail authorities are failing in their duty.”
Whether it is wilful neglect or the sheer pressure of over-crowded jails, the result is that families have been forced to get court orders even for phone calls. With mulaqats (in person meetings with prisoners) stopped in the wake of the pandemic, relatives wait for a 4-5 minute phone call all day, often for weeks.

Sagar Abraham Gonsalves, son of activist Vernon Gonsalves, says that the family had no news of him for a month till he was allowed a phone call in April. In July, they found that he and activist colleague Arun Ferreira were taking care of ailing poet Varavara Rao in jail, helping him bathe and brush his teeth. “My father is very resilient and he does not mention any difficulties but it is unfair to expect him to take care of another aged person,” he says. The family struggled to get a Covid test for him too after he got symptoms. “We had to beg to talk to him. The whole system is such that you are treated like a second class citizen,” he says.
Madhurima Dhanuka, who works on prison reforms with NGO Commonwealth Human Rights Initiative, says no prisoner should have to go through this indignity but admits that prisons continue to be opaque. “The pandemic has made prisons even more closed,” she says.

One of the mechanisms that can ensure accountability and grievance redressal is a responsive body that includes a judge, district magistrate and others that will make regular visits to the prison and address these day-to-day issues, she suggests. “However very few states have even constituted such a committee that would ensure a collaborative way of addressing issues,” she adds.