Maharashtra Medical Council takes 15 years to respond to my complaint, dismisses it in one go 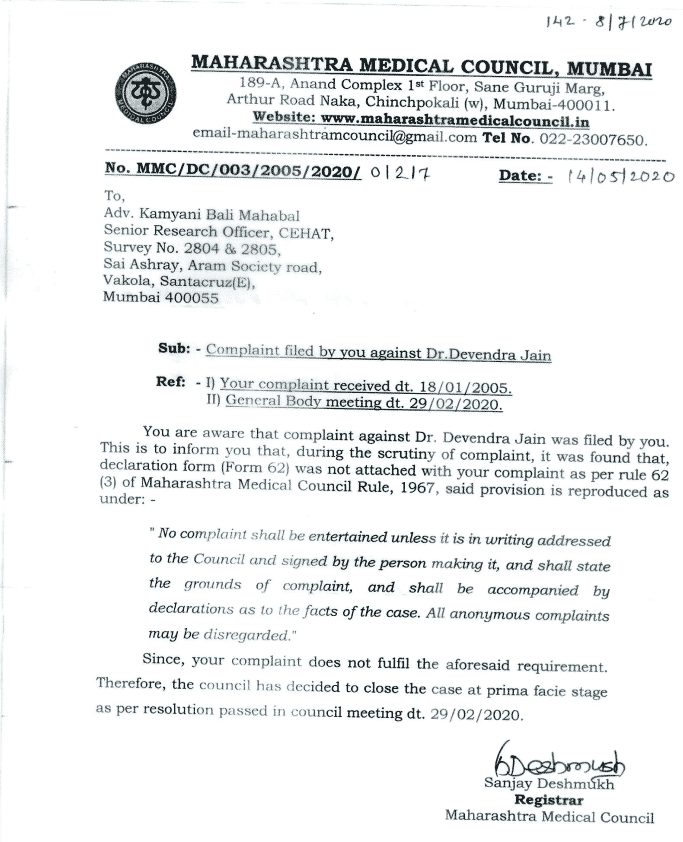 Kamayani Bali Mahabal disputed the claim that her complaint was anonymous and that she didn’t attach a mandatory form.

The next time you grumble about not receiving a prompt reply to a complaint, spare a thought for Kamayani Bali Mahabal. The gender, health and human rights activist finally got a response from the Maharashtra Medical Council (MMC) on Thursday to a complaint she had filed 15 years ago, only to have it dismissed for not “fulfilling” the criteria.

Mahabal, who then worked as a senior research officer with the Centre for Enquiry into Health and Allied Themes, shot off a letter on January 18, 2005, to the MMC to complain about an article in a magazine, Pranay Sparsh, by an MBBS doctor, Devendra Jain, promoting sex selection. The article offered ‘home remedies’ to conceive a male child, which, she pointed out, was a blatant violation of Section 22 of the Pre-Conception & Pre-Natal Diagnostic Techniques Act barring sex selection/determination.

She didn’t hear from the MMC until this year. The council sent her back a letter, dated May 14, saying a meeting conducted on February 29 came to the conclusion that since her complaint didn’t have the self-declaration form 62 attached with it as mandated under rule 62(3) of the Maharashtra Medical Council Rules, 1967, it could not be entertained. The rule, dealing with complaints against registered practitioners, states that “no complaint shall be entertained unless it is in writing addressed to the Council and signed by the person making it and shall state the grounds of complaint, and shall be accompanied by declarations as to the facts of the case. All anonymous complaints may be disregarded.”

The MMC said since Mahabal’s complaint didn’t “fulfil” the requirement, the case was being closed.

Mahabal called the MMC’s bluff. She asked how the council could claim she had filed an anonymous complaint when it had addressed its response directly to her—the MMC letter mentioned her by her name. She also asserted that had attached all relevant forms while filing the complaint.

Public health analyst Ravi Duggal said such a response from the MMC wasn’t a surprise. “It doesn’t have a clean history; its performance has been terrible,” he said, recalling a case of late veteran Marathi actor Dr Shriram Lagoo. “He held a medical degree, but wasn’t a practising doctor. When the MMC learned that he had appeared in an advertisement, it cancelled his medical licence. It pulled up a doctor who had never practised the profession.” Duggal found the silver lining in Mahabal’s case. “At least, there are some proactive staffers who seem have to have taken an initiative to address complaints that have been pending for years,” he said.