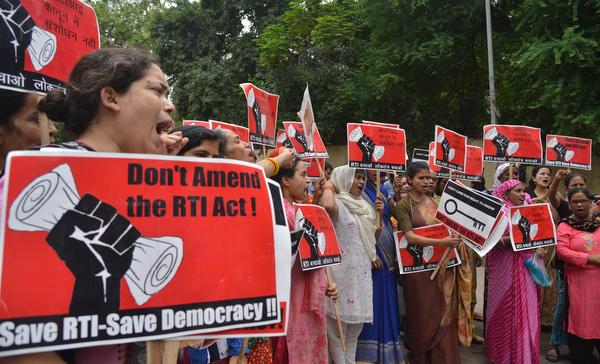 Captured in the 110-page report titled `Life and Death in the Time of RTI (Case Studies of Maharashtra), are detailed findings of 13 Right to Information (RTI) activists and users of Maharashtra who were brutally killed between 2010 and 2018. Sadly, the challenges faced during the study portray a pathetic picture of how shoddily the criminal justice system treats the death of such whistleblowers who are soldiers of pro-active citizenry in a democracy and how the society including the media ostracises and maligns their family members.

The study conducted by me and my colleague Prasannakumar Keskar is an outcome of the Commonwealth Human Rights Initiative (CHRI) fellowship won by us. It was conceptualised and edited by Venkatesh Nayak, CHRI’s RTI researcher. Hesitation of family members to speak out; shoddy police investigations; accusations of the Late activists being labelled as blackmailers; witnesses turning hostile; a callous and indifferent media and apathy of the RTI activists’ fraternity are some glaring observations and the reasons why it was challenging to compile the research findings. The following are our main observations and the major challenges we faced while conducting our investigation: •

Reluctance of families of slain RTI activists to speak out:

Traumatised by the brutal murder of their bread-winners, who were labelled as ‘RTI blackmailers’ by the police and sometimes by the media, family members were reluctant to talk to us about their experiences. They looked at anyone who approached them for information about the slain activist with suspicion. Afraid that they may be targeted again and also distressed by the fact that the whistleblower’s sacrifice had gone in vain, some had even burnt the RTI documents obtained by the murdered activist or hidden them away. We had to find alternate means to obtain these documents, from friends or compatriots with whom they shared their penchant for activism. We were successful in some cases but were stonewalled in others. In two cases we could not find photos of the slain activists at all.

• Shoddy police investigations: In almost all cases, immediately after the murder, the families, obviously in a state of shock, could not give the name(s) of persons whom they suspected for being behind the attacks.  Meanwhile, the police, in the name of probing all angles, came up with explanations that we found bizarre, avoiding even mention of the possibility of the murder being related to their “RTI activism” in their reports. Later, when the families came forward to name the suspects, the police refused to probe this angle, terming the attempts by the families as an afterthought. For example, when the first information report (FIR) was registered by the family member who learnt of the murder first, it did not identify any suspect.  Later when the family members gave their statements to the police in the course of the investigation, they were labelled as ‘deliberate improvements’ by the trial courts. This happened in the case of Satish Shetty (case study #1) and Dattatreya Patil (case study #2), to name a few. As a result, the perpetrators of the heinous crime got ample opportunity to escape the long arm of the law and even destroy crucial evidence. Because of this, we had to spend considerable time digging out details of what else had occurred that did not find mention in the police investigation reports.

• Police branding RTI activists as blackmailers: The police have been treating the murders of RTI activists as routine cases of murder due to personal enmity and avoiding describing the victims as RTI activists. Instead, immediately after the murders or at times even during the trials in the court, they projected the RTI activists as blackmailers. This resulted in a media trial which stigmatised the families for years, making it impossible for them to not only to seek justice but also to lead a normal and dignified life in the community where they reside. At least one family moved away where it lived and remained untraceable despite our fervent efforts.

• Witnesses turning hostile: Panchas (witnesses) turned hostile in almost every case of acquittal not least due to fear of reprisals from the murder accused or pressure from other quarters. After all, these activists had taken on the locally powerful and the influential people head on in their struggle for social causes. The criminal justice system also did not bother to ensure the safety and security of the witnesses so that they could give evidence during the trial in a free and fearless manner.  Further, the delay in arresting the suspects also created a fear psychosis. Such delays helped the culprits to influence witnesses as was alleged in the case of Vitthal Gitte (case study #4). There was a considerable time gap between the murder and the trial proceedings, as a result of which discrepancies between various accounts of how the crime was perpetrated cropped up during the depositions in the trial court.

• No coordinated efforts by the RTI activist community: Families of slain RTI activists got little help from their fraternity. In rural areas, RTI activists either do not know each other or do not help in furthering the causes that the slain activists had taken up. In urban areas like Mumbai, the apathy is even more apparent. Therefore, tracking down the families of the slain activists itself became an arduous task.  In most cases, neither the RTI activists nor journalists from newspapers which had carried screaming headlines after the murders, had the contact numbers or addresses of the victims’ families. Even the police and public authorities were not forthcoming with such information despite our repeated efforts. Tracking down the families was an uphill task in many cases.

• Stalking during our field trip: ‘Let sleeping dogs lie’ is the attitude adopted by society in general, in such matters. As a result, someone who starts making inquiries is often seen as a potential threat and faces hostile reactions. During a field trip, one of us, authors, was at the residence of a slain activist making the usual inquiries. A couple of men reached the house and, using their mobile phones, clicked our photographs, that of our driver and the car we used. On our return journey we halted at a dhaba (roadside restaurant) for a meal. While the youth at the counter was questioning us about who we were and the purpose of our journey, we could see our photo, that of our driver and the car we used, loaded on his mobile phone. Our photos had been shared at lightning speed with the youth at the dhaba, situated at least 200km away from the village where we had conducted our inquiries earlier.

• Inadequate legal support: When it came to the trial court, public prosecutors relied on circumstantial evidence, thanks to the inadequacy of evidence collected during the police investigations particularly with regard to witness statements. Also, in the cases we have analysed, the public prosecutors did not further cross-examine the witnesses who turned hostile.  With most of the RTI activists having been killed in public places or on public roads, there would have been witnesses, whom the police did not take the trouble to track down – deliberately or otherwise.  This was observed even by the trial court in the Dattatreya Patil murder case in which strictures were passed against the investigative officer for his failure to track down witnesses who might have seen the activist and the accused present in the same area at the same time.

• Lack of records in police stations: In almost all cases, records at the police stations did not have the judgement in cases where the trial had been completed. This, even after two to three years of the court having delivered the judgment. We had to rely on the E-courts website to procure them. Thankfully, Maharashtra has taken steps to upload judgements of trial courts in criminal cases. So, we were able to access some case records.  However, where case numbers or case details were not known, finding official documentation of several cases became impossible. In a few ongoing cases the police records only spoke of preventive action taken against the accused after they were granted bail. No further information about the status of the criminal trial was available with them.

• Media found wanting: We found that news reports published and circulated, in rural areas were tilted against the slain activists.  In one case, the reporter of a prominent newspaper confessed to us that the facts mentioned in his story were false. Moreover, there had been no follow up reporting of the cases by the media. As a result, we had to cross-check every fact reported in newspapers.  When it came to the latest status of the cases, we had no way other than extensive internet searches through e-court websites, public and private websites, and blogs to rely upon. At times while looking for addresses or contact details of the victims’ families we had to talk to local grocery shop owners and community workers to collect information and to identify the bare bone facts in order to stitch them together into a reliable narrative.

Footnote: Given the extremely poor response of the system to provide justice to the victims’ families, it is of prime importance to put in place mechanisms to ensure that the possibility of attacks on RTI activists and users is mitigated.  In the rare instance where such attacks occur, effective oversight mechanisms are necessary to ensure that the law enforcement agencies and the courts do their mandated jobs without any external influence or considerations