Kanchan Nanaware , A students’ rights activist from Chandrapur district, , who was arrested in 2014 for her alleged role in the Maoist movement, succumbed to a heart and brain ailment in the state-run Sassoon hospital in Pune. Nanaware was 38 years old and belonged to the Adivasi community.

Nanaware, who was born with a congenital heart illness, had developed a brain ailment in the past week. Her family and lawyers allege that neither the jail nor hospital authorities informed them till her brain surgery was conducted on January 16.

In the past two years, Nanaware, through her lawyer, had moved both the sessions court and Bombay high court for bail on several occasions. “Each time, it was rejected,” her lawyer Parth Shah says. In October, an application was moved before the Bombay high court on medical grounds, and her deteriorating health condition along with the doctors’ recommendation for a heart transplant were placed on record before the court. But the application remains pending.

When her bail application was heard before the high court, the court was told that a heart transplant was the only option available to ensure she survives. The court had even formed a committee to opine over her health condition and the need for urgent medical care. But even such an urgent matter of life and death took months to be heard – during which time she passed away.

Of the nine cases that Nanaware was booked in, she was already acquitted in six cases. Three cases – one each in Gadchiroli, Pune and Gondiya – were still pending. Over the six years that she spent in different Maharashtra prisons, she was essentially an undertrial prisoner. Nanaware was arrested along with her husband Arun Belke and booked under several sections of the Unlawful Activities (Prevention) Act. Belke continues to be in jail.

Shah says although she was seriously ill, her family was not informed immediately. “Belke’s family received a letter today (January 24) informing them about her deteriorating health condition. And later today, they received a call saying she has succumbed to health complications,” Shah says. The lawyers’ team are now moving the court to have Nanaware’s body moved to Belke’s family in Ballarshah city in Chandrapur district. “At least after her death, the family is hoping they would be able to access her body and carry out the final rites,” Shah says. 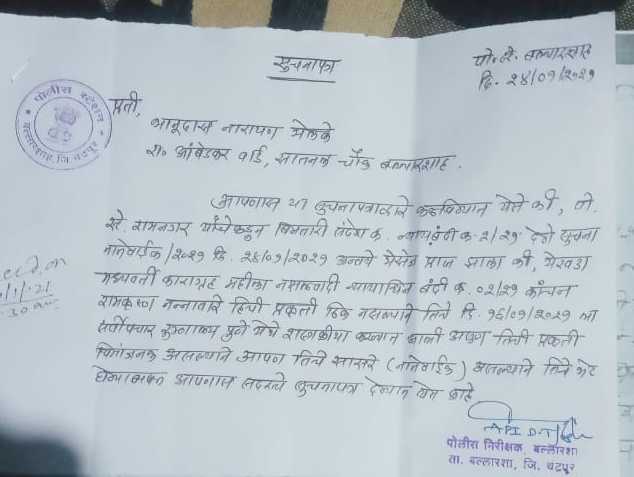 The letter received by Nanaware’s husband’s family on January 24, the day she passed away, saying she was unwell.

Nanaware began her participation in the social movement as a students’ rights activist in 2004. Her associate from that time, Anuradha Sonule, recalls that Nanaware, Belke and over a hundred other students were a part of the Deshbhakti Yuva Manch since 2004. Sonule too was arrested in 2011 in another case with similar allegations along with cultural activists of the Kabir Kala Mach. She got out on bail in 2014.

“We had participated in several students’ agitations and also raised our voices against issues concerning farmers, and Adivasi and Dalit communities. Kanchan remained actively involved despite her health condition,” Sonule shares. Deshbhakti Yuva Manch was later accused of being a “frontal organisation” of Maoists and Nanaware, along with Belke, was arrested for the first time in 2008. The duo and over a dozen other students were accused of participating in Naxal activities in the region and booked under UAPA. They remained in prison for close to seven months and were subsequently acquitted.

As news about Nanaware’s deteriorating health reached Sonule, she had visited Sassoon hospital. “I was not allowed to see her but was informed about her surgery. The doctor told me that she had been complaining of headaches and had developed blood clots. Another Pune-based lawyer, Gayatri Kamble, however, was allowed to see Nanaware. The surgery had left Nanaware unconscious. Belke too was granted permission by the court to meet Nanaware, but his lawyers allege that the prison authorities did not make necessary arrangements immediately and meanwhile Nanware passed away.

In March last year, soon after the COVID-19 outbreak in the country, the Supreme Court has suo motu ordered for the release of prisoners on bail. The Maharashtra government too had promised it would release over 11,000 incarcerated persons. But while a few prisoners were released, several more kept being added to the prison population.

Daughter of a retired bank officer, Nanaware hailed from Chandrapur district of Maharashtra. She came in contact with Bhelke and became an active member of his Deshbhakti Yuva Manch (DYM), which was later branded by police as a front for the banned Communist Party of India-Maoist.

Advocate Parth Shah, another lawyer representing her, said, “She had been admitted in Sassoon hospital on and off since September. She was last admitted on January 16 and has since been there. Following the Bombay High Court’s directives, a committee was formed at the Sassoon hospital to oversee her treatment. She had recently started suffering from lung complications and multiple organ issues. A private doctor had suggested a heart transplant as the only treatment to her worsening condition. We are in touch with the jail authorities for the further formalities.”

The Maharashtra home department had also arbitrarily decided to exempt undertrial prisoners who are booked for serious economic offences/bank scams and offences under special Acts (other than IPC) like MCOCA, PMLA, MPID, NDPS, UAPA etc. Nanaware, an undertrial prisoner facing trial under the UAPA, did not qualify to be released on bail. Her serious illness too was disregarded.

Nanaware’s lawyer Rohan Nahar says that even in the cases that led to her arrest in 2014, she was never convicted. “But it is unfortunate that her health condition did not push the courts to give a favourable order and grant her bail. She was accused of Maoist activities and the tragedy is we would never know whether she was really involved. She was punished through her incarceration,” he said .

We walk. For the good earth that is ours
In school near Pune, girls taking HSC exam ‘strip-searched’   #WTFnews
Chhattisgarh: The optics of human rights
Rosa Parks, The Power Of Resistance And the #delhigangrape #Vaw