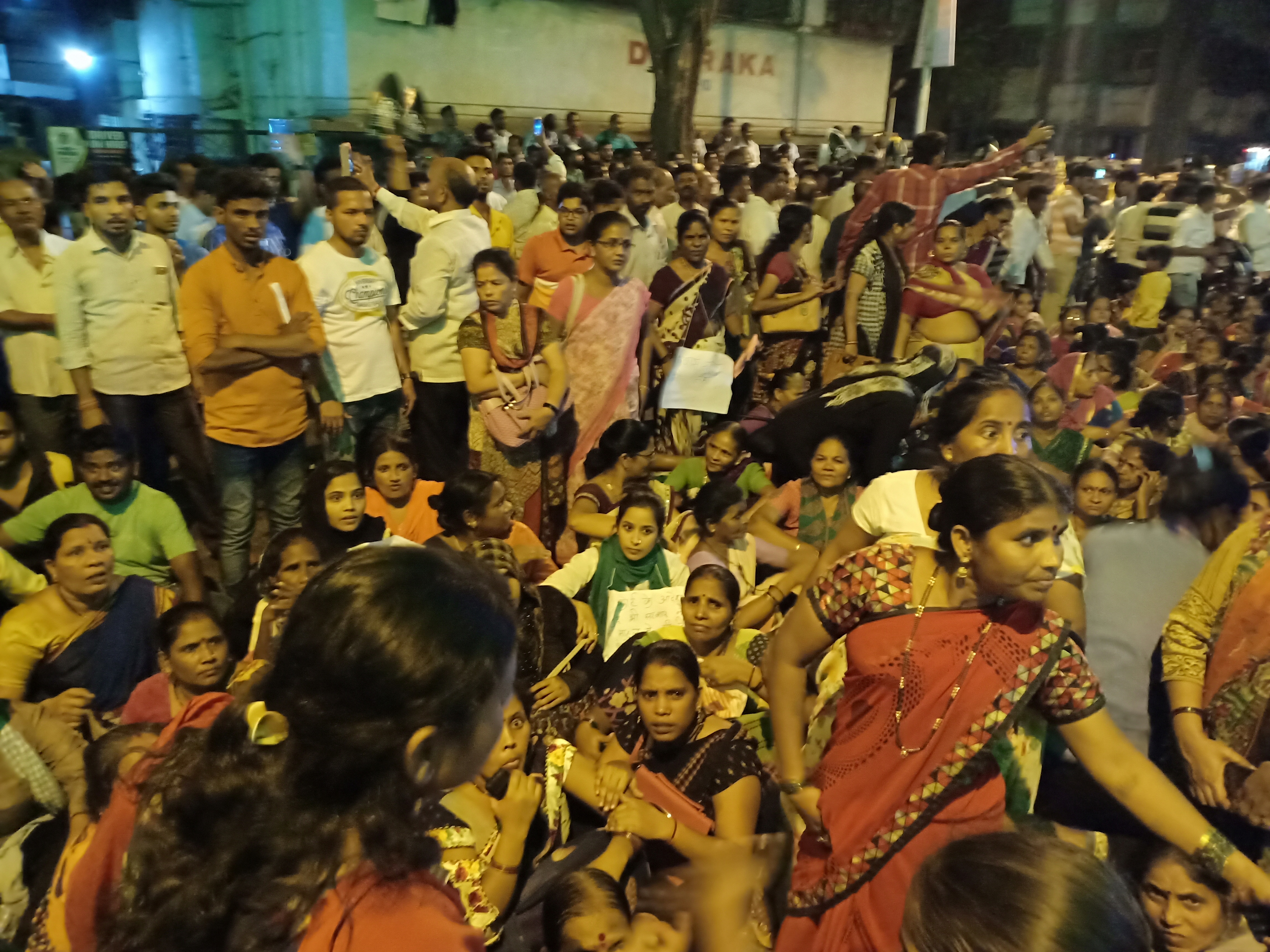 ●
●After the massive gherao, Housing Minister fixed meeting with Mahul residents
Mumbai:  Hundreds of residents of Mahul gathered today, on the 15th day of their protest to form a human chain and capture the attention of Maharashtra Govt towards the plight of over 30,000 citizens who had been rehabilitated in mahul last year. The human chain which spread over 3 Km had participation from over thousands of citizens. Many people from other slums in Mumbai also joined in solidarity. Many students from colleges like Mumbai University, Tata Institute of Social Sciences, IIT Bombay, Nirmala Niketan, Democratic and progressive Organizations, NGOs and individuals also joined to extend their support.
The Human Chain was followed by a massive rally which culminated at the resident of state housing Minister, Shri. Prakash Mehta. After much of negotiation, the Minister called Ms. Medha Patkar who was present in the rally and promised to meet a delegation of Mahul residents in Mantralaya tomorrow afternoon.
It has been 15 days since the Mahul residents started the protest but have not received anything other than irresponsible comments and false promises from the govt officials and ministers. The Minister for Housing Department, Prakash Mehta has refused to intervene in the matter or take responsibility. The Chief Minister of Maharashtra has refused to acknowledge the issue or pleas of Mahul residents. For Mahul residents, today’s human chain signified to show their unity and resolve to fight till all the demands are met.
The citizens started their protest under the banner of ‘Jeevan Bachao Andolan’ on 28th October 2018, after the govt failed to act on the directions of Bombay High Court, given out in August 2018, asking the Govt to provide alternative rehabilitation to the people living in Mahul. Mahul, which is one of the most polluted region in Mumbai and rightly called ‘Mumbai’s Toxic Hell’ has been made into a rehabilitation space for thousands of citizens by the Slum rehabilitation Authority (SRA), even after the National green Tribunal (NGT) declaring it as ‘inhabitable’.  All families staying in Mahul have reported deaths and continued illnesses like TB, Cancer, tumors etc  among their family members since they started living there.  Over 100 people have already lost their life while living in Mahul. The people have termed this as a mass genocide by the govt.
On 8th of August, 2018, the Bombay High Court has directed the Govt. of Maharashtra to either relocate the Mahul resident by giving them alternate accommodation or given them enough rent so that the people can go to a safer place of their choice. The Court had set a deadline of 1st October, 2018 for the Government to take a decision between the two opt.
The Govt of Maharashtra submitted in the Court that it is not possible for the Govt. to provide any alternative accommodation nor it can give rent to the people. In other words Govt. shrug off its responsibility to save 30,000 lives. On the issue of providing alternative tenements, the Govt. said that they don’t have tenements to be given to Mahul residents. As far as giving rent is concerned the Govt simply said that it is impossible to give rent without giving any reason.
GBGBA has a list of more 80,000 tenements which are meant for Project Affected Person and are located at different location within Mumbai. This is something which they are suggesting as a solution for relocation of Mahul residents on an urgent basis.

The residents of Mahul left with no option but to literally come on street to save their lives when they found that the Govt. has taken off its hand from the matter. They got terrified with the increasing rate of deaths and people suffering from serious diseases. Hence, the Jeevan Bachao Andolan under the auspices of Ghar Bachao Ghar Banao Andolan was launched on 28th October, 2018
On the third day of the JBA, GBGBA’s proposal to provide alternative accommodation got partial approval when Shiv Sena, the coalition partner in the Maharashtra govt. decided to come in support of the movement. On insistence of party’s youth wing president, Mr. Aditya Thackrey, the MLA and newly appointed Chairman of MHADA offered all the 300 empty lying tenements available with MHADA.
While the BJP having all the portfolios in the government to take final decision on the issues is being completely mum, the Shiv Sena is going out of the way to resolve the issue by coordinating with other housing agencies to find out more PAP tenements on the lines suggested by GBGBA.
The Mahul residents have decided to not take back their movement which they have started to save their lives, until they get confirmation of safe housing to each family living in Mahul. 300 houses is like a cumin seed in camel’s mouth against the demand of around 5,500 houses

India - Supreme Court rules against religion in politics
Pascal Mazurier, from being ‘monster dad’ has become a ‘grieving father’- Story media changed #Vaw
Dance of death in Vidarbha
Open letter regarding unscientific epidemiological practice and Islamophobia in a textbook of Medica...