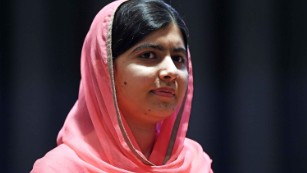 The 20-year-old education advocate criticized Suu Kyi, the country’s state councilor and de facto leader, for her silence on the plight of the Rohingya people, who have been fleeing a harsh crackdown by the Myanmar military.
Malala Yousafzai
“Over the last several years, I have repeatedly condemned this tragic and shameful treatment. I am still waiting for my fellow Nobel Laureate Aung San Suu Kyi to do the same,” Yousafzai wrote. “The world is waiting and the Rohingya Muslims are waiting.”
The Rohingya, a Muslim minority in predominantly Buddhist Myanmar, are considered some of the most persecuted people in the world. Myanmar, also known as Burma, considers them Bangladeshi while neighboring Bangladesh says they’re Burmese, effectively leaving them without a state.
Recent violent clashes in Myanmar have killed hundreds while a mass exodus has seen more than 73,000 flee across the border since August 25, the United Nations said on Sunday.
In Myanmar’s northern Rakhine State, there are reports of at least another 30,000 Rohingyas trapped in hilly terrain without basic supplies of food, water or medicine, according to activists.
Rohingya activists say the refugees are stranded between Maungdaw and Rathedaung townships, as they are unable to cross the Naf River into Bangladesh.
Videos provided to CNN by activists show dozens of men, women and children stranded on a mountain, surrounded by dense jungle, living in makeshift shelters made of sticks and sheets.
“The human lives that are most vulnerable must be rescued immediately without delay,” executive director of Burma Human Rights Network, Kyaw Win, said in a statement.