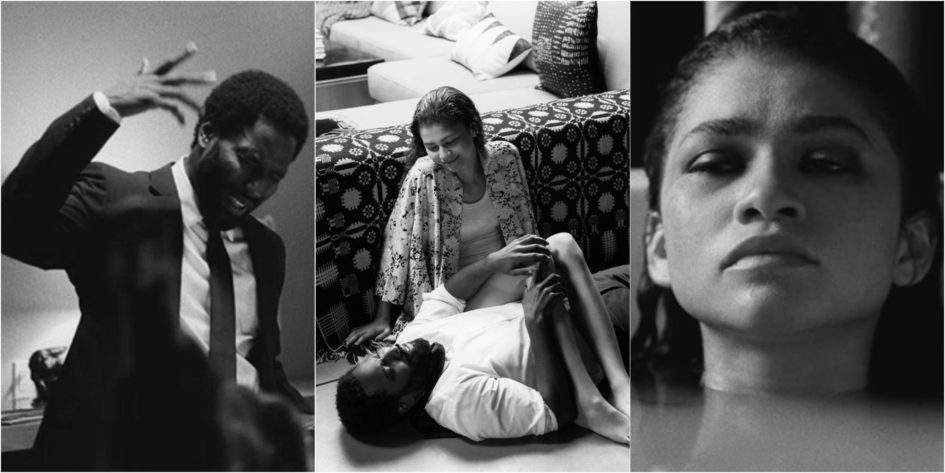 “Malcolm & Marie” is an intense drama set in one location and features Zendaya and John David Washington as a couple on the brink of break-up during a night filled with volatile arguments.The Netflix movie revolves around a Hollywood couple’s argument catalyzed by Malcolm’s (Washington) failure to thank Marie (Zendaya) in his film premiere speech. While Malcolm drolls on about the premiere, a simmering Marie prepares him mac and cheese.

“I know when nothing is something.” —Malcolm

The movie  shot in black and white, a directorial decision that draws greater emphasis to the turbulent relationship. Devoid of color, the script-heavy plot and the actors’ facial expressions become the central focus of the film. It also flirts with some potent questions of how we consume and interpret culture. If ever there was an example of a toxic relationship, Malcom and Marie’s would be it. The film switches between scenes of tumultuous arguments and passionate embraces.  Carried by a hefty script, Zendaya and Washington are up to the task, wielding lengthy dialogues scenes that are shot in long stretches.

Marie is a former drug addict, and at one point, Malcolm calls her a “pilled-out disaster.” Although he states that drugs were destroying their ability to love each other, his comment is still hurtful since he was the person who checked her into rehab and went to group-therapy sessions with her.While putting on a show, Marie pretends that she isn’t clean, never was and never intends to be. We hear that Malcolm found his ex-girlfriend passed out with a needle in her arm from drugs. He says that her sister called him years later to tell him that the woman had since overdosed and passed away. We also learn that the screenplay Malcolm wrote was about a 20-year-old drug addict.

“You may have gotten clean, but you still haven’t figured this part out yet, why you love being hurt, traumatized, and fucking eviscerated?” —Malcolm

“Oh, so you gave up a career in acting to be an emotional fucking support dog.” —Malcolm

“Pick a room, get to fucking work, and stop blaming me for your inabilities to get your shit together.” —Malcolm

The nature of film is open-ended. A film can be so many things. Whatever the intention of the director, it can then be read and dissected any number of ways by its audience. And so, what an interesting thing for a film to be an internal argument against itself, as though it is the only thing that exists, and there would not be an external reading after the fact.

The “authenticity” (I use quotes as this is directly from the film) is the fact that Malcolm and Marie bring you into their fight as I found myself saying the exact words Marie was about to say aloud to Malcolm. Both characters are smart and tough and neither is ever emotionally highjacked for long allowing for calm moments interjected to create a balance in the story and in the relationship. Marie is angry and from a woman’s point of view, I completely understood her immediate and long-buried issues. As the water for the mac-n-cheese begins to boil, so too does her temper. Marie’s body language says it all, but the words pulsate with intensity until she reaches the ultimate crescendo. Matching that, Malcolm fires back like a fully loaded verbal machine gun with the accuracy of a sharp shooter. They know each other’s strengths and weakness.

“Are you actually yelling and belittling me from across this house because you are too busy eating mac and cheese?” – Marie

“If you’re gonna treat me like an insane person and call me crazy the least you could do is do it without casually eating macaroni and cheese.” – Marie

It’s a perfect portrayal of Men are from Mars and Women are from Venus as issues of infidelity, race, entitlement, drug usage, recovery, plagiarism, credit, and empathy are woven into the story, seen from each perspective. Marie feels she has received no gratitude for her part in his successes or their relationship.

Marie: You know, life is going to get easier, but it’s also going to get harder.
Malcolm: What do you mean?
Marie: Just don’t believe the hype, Malcolm. And don’t push away the people who ground you.

And Malcolm, accused of being narcissistic, compartmentalizes the argument so that he can eat his boxed macaroni and cheese. And as the make up and clothes come off, their true selves are more accurately displayed and they are no longer actors on the screen and we are flies on the wall, riveted by what we see and hear. The story and our beloved characters fight with love in order to be able to love possibly more deeply or perhaps to their demise. This narrative arc rises and falls creating an unparalleled story of passion and understanding amidst the chaos.

Marie: You know what, Malcolm? I feel like once you know someone is there for you, and once you know they love you, you never actually think of them again.
Malcolm: That’s not true.
Marie: It’s not until you’re about to lose someone, that you finally pay attention.

The pain that is inflicted upon them both from their razor sharp tongues filled with gut-wrenching honesty is visible with just a flinch of an eye or a downward gaze. While the story replicates many familiar age-old arguments with timeless issues among the clutter of their lives, this bold and flawless film dares us all to be honest in love to see where the chips fall. There will be something in this film you can relate to. Maybe you don’t fight and argue like Malcolm and Marie. But maybe you know the vulnerability that they each show.

We hear about Marie’s previous attempts to cut her own wrists. Malcolm worries that because she is dependent on him, Marie might attempt to harm herself again if he makes another big mistake in their relationship. We see Malcolm violently punch the air in anger. He also makes an offhand comment that he could “snap” Marie like a twig. A woman grabs a knife and waves it around threateningly, but we later see that she is playacting.

“Try slitting your wrist with a pair of nail scissors. You’re not gonna wanna survive it, though, because it’s embarrassing.” — Marie

“While I’m actually doing something, creating something, you’re on the sidelines trying to justify you motherfucking existence.” — Malcolm

The photography is constantly interesting, structurally informed by the amazing building where it all takes place. It lovingly captures the stars, creating just the right mood, just the right feeling, through consistently gorgeous lensing. The 35mm footage is an immense credit to the production, exquisite and texturally rich.

The house was super narrow and the rammed-earth walls turned into giant gray lumps on camera, but black-and-white is friendly to textures and patterns. It’s a magical house with a lovely connection to the landscape and an economy of design that wouldn’t interfere with the intensity of the drama.

“You are, by far, the most excruciating, difficult, stubbornly obnoxious woman I met in my entire life.” – Malcolm

On top of the emotional performances, writer-director Sam Levinson showcases an impressive collection of songs, which elevates the tension-filled night. Featuring tracks from the likes of James Brown, Outkast, Duke Ellington, and Dionne Warwick, the soundtrack is a needed counter to the verbal sparring happening throughout.

The Dionne Warwick song, “Get Rid of Him,” played on Marie’s phone to show Malcolm’s controlling nature.The song’s lyrics take over the scene as the two sit there in silence while Warwick sings about how she’s going against the advice of her friends and will “never let go” of her flawed man.

Malcolm and Marie did find time to take breaks from their heated exchanges and one of the standouts is when they kiss passionately as Duke Ellington’s “In a Sentimental Mood” plays.The scene is cut to focus on two things: an intimate encounter between the two and Marie playfully suggesting that Malcolm is going to sell out and make a Lego movie. It’s a rare time in the movie where it doesn’t feel like things are happening in real-time.

The Malcolm and Marie soundtrack balances jazz standards with modern funk.The music that is entwinned into the story is a mixture of 70s and 80s tunes, with some modern songs thrown in as well.

The James Brown song, “Down and Out in New York City,” was written in the script. Malcolm is seen dancing along with the music as he has a drink in his hand. There’s even a moment in the song, in the midst of Malcolm’s glory, that Brown sings the lyrics, “I’m never, never, never gonna get that way again,” which in the song is Brown’s declaration of rising up from the brutality of the streets, but for the setting of this movie is a standout lyric because once this song ends Malcolm will never feel that good again for the rest of the night.

Thank you for always understanding that I’m not always great at expressing how I feel and it comes out in my work more than in real life. Thank you, because I know it doesn’t always feel good, so I hope you can live with that.” —Marie

Throughout the psychological games and emotional twists and turns, Zendaya and Washington keep the audience as off-guard as the characters do each other. Malcolm & Marie pushes you to deal with those imperfections you put up with because you love someone, see their potential, and their loyalty has shown them to be better than they are at their worst moment

“You want control because you can’t imagine the reason I’m with you is because I love you. I just love you, baby. I don’t need you.” —Malcolm

If there’s one thing that pretty much everyone can relate to while quarantined, it’s the feeling of being trapped. With literally nowhere to go, there’s a frustrating sense of being trapped. It plays into the aforementioned moment where Marie heads outside for the sake of it.

Although the characters aren’t living in an actual pandemic, the confined location of the film works as a timely metaphor for the feeling of restraint that comes with quarantine. It captures the most relatable feeling of all right now: To be trapped.

The film  asks an important question of what is worse: being needed but not loved or being loved but not needed by one’s significant other?