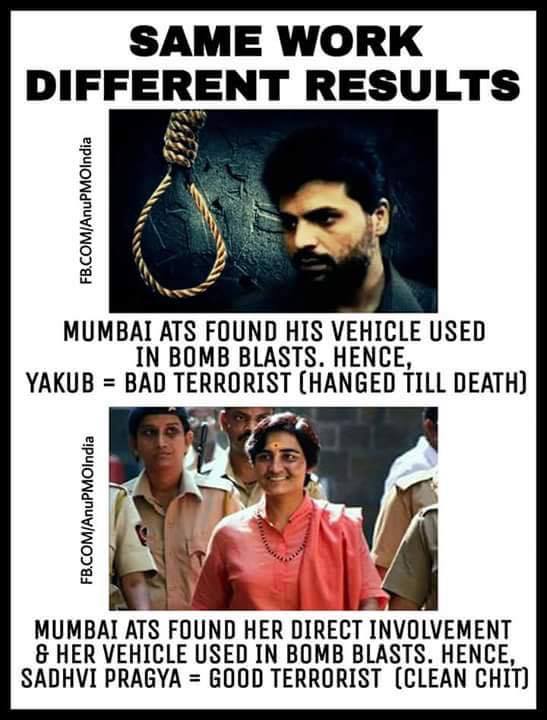 DISCHARGE OF SADHVI PRAGYA AND OTHERS IN THE MALEGAON BLAST CASE

The month of May began with the BJP demanding action against the water mafia in Mumbai underthe Maharashatra Control of Organized Crime Act (MCOCA). On the 10th of May Atikh Khan, Rafiq Khan and Javed, all three ragpickers, were charged with MCOCA for allegedly causing the fire in the dumping ground at Deonar Mumbai. This was of course followed by the big story- the dropping of charges by the National Investigation Authority under MCOCA against all the accused belonging to the Abhinav Bharat in the Malegaon blast case (MCOCA Special Case No. 1 of 2009), and discharging 5 of the accused including Sadhvi Pragya.

The Malegaon blasts which killed 7 and injured 101, apart from causing damage to property, took place during Ramzan on 29th September 2008, opposite Shakil Goods Transport Company between Anjuman Chowk and Bhiku Chowk. The casualties were all Muslims. The blast took place through an explosive device fitted on an LML Freedom motorcycle bearing No. MH-15-P-4572. The FIR was filed by the ATS against 14 accused, including 3 absconding accused when investigations revealed that that the motorcycle used in the blast belonged to Accused No.1 Pragyasingh Chandrapalsingh Thakur @ Swami Purnachetanand Giri, and the blasts were conducted by the wanted accused and others. Intercepted phone conversations revealed conspiracy and the charge-sheet further disclosed dates and details of meetings wherein the blasts were planned and the execution details worked out. The charge-sheet which was published (available on the EPW website), discloses that Rakesh Dhawade, a core member of Abhinav Bharat, was involved in conducting bomb blasts since 2003 and details of his two pending cases were provided in the chargesheet. Explosives were recovered from Colonel Purohit. The chargesheet was filed by the Anti-Terrorism Squad (ATS) under Sections 3(1)(i), 3(1)(ii), 3(2), 3(4) and 3(5) of MCOCA, 1999; along with Sections 302, 307, 326, 324, 427, 153-A, 120-B of the Indian Penal Code, r/w 3, 5, 25 Arms Act, r/w 3, 4, 5, 6 of Explosive Substance Act, r/w 15, 16, 17, 18, 20 and 23 of Unlawful Activities (Prevention) Act, 1967 (Amended) 2004.

The NIA, which took over the investigation in 2011, filed a chargesheet on 13th May 2016, calling the methods used by the ATS dubious and questionable and discharged 5 of the accused and dropped charges of MCOCA on the grounds that the induction of the charges against Rakesh Dhawade in the two cases was questionable as they were done after his arrest in the present case. The dropping of MCOCA renders the confessional statements recorded by the DCP as permissible under MCOCA inadmissible. This will lead to the abandonment of the statement of Sudhakar Dwivedi which provided details of the conspiracy. The NIA also held that the confessions were obtained by way of torture and were retracted and hence had no evidentiary value. This reasoning of the NIA would have been welcome had it applied to all cases. The use of torture to obtain “evidence” and confessions that are used to convict accused is routine, and this concern for the human rights of the accused in other cases where there is ample evidence of torture, is missing, not only on the part of the investigating agencies but also the judiciary. The dropping of the charges against the Sadhvi resulted from the reliance on the statement of the Sadhvi that though the motorcycle belonged to her, the same was not used by her; and on the retraction of other witness statements. Such susceptibility to believe the accused by the investigating agency has hitherto no been seen in any judgment of any court. The chargesheet claimed that ‘”The incident took place on September 29, 2008, came to NIA for investigation on April 13, 2011. This has led to a situation wherein no additional evidence could be collected from the scene of crime and the veracity of the evidence collected by the previous investigation agency could not be fully substantiated.” Thus the NIA took on the role of the judiciary in examining the evidence gathered by the ATS.

nature of an ‘organized crime’ of the two earlier cases, namely, Parbhani and Jalna and also direct involvement in the present bomb blast at Malegaon. In such circumstances, there is no difficulty in coming to a definite conclusion that insofar as, A-7 is concerned, his activity and involvement in all the three occurrences, namely, Parbhani, Jalna and Malegaon disclose nexus with the crime and also with the other accused involved in the crime and thereby the satisfaction of the definition of ‘continuing unlawful activity’ of an ‘organized crime’ on behalf of an ‘organized crime syndicate’ is satisfactorily shown.”

The move of the NIA would have been welcome had this concern for the rights of the accused and “truth” been universal. However this selective application of separate standards of proof for different cases and the bending of rules for Hindutva terror, and the application of the standard of proof of “collective conscience of the people” when it comes to the rights of accused belonging to Minority community and those who are seen as ‘anti-nationals’, shows the nexus between the state agencies which are meant to uphold the rule of the law and the Hindutva forces. This not only undermines the right to equality before the law and equal protection of the law as stated in the Indian Constitution but also the democratic right to justice. The NIA’s actions not just impinge on the creation of a highly hierarchical society where some are above the law, but also seek to rewrite and distort history.