Mamata on linking Aadhaar with mobile number: ‘I will not do it’ 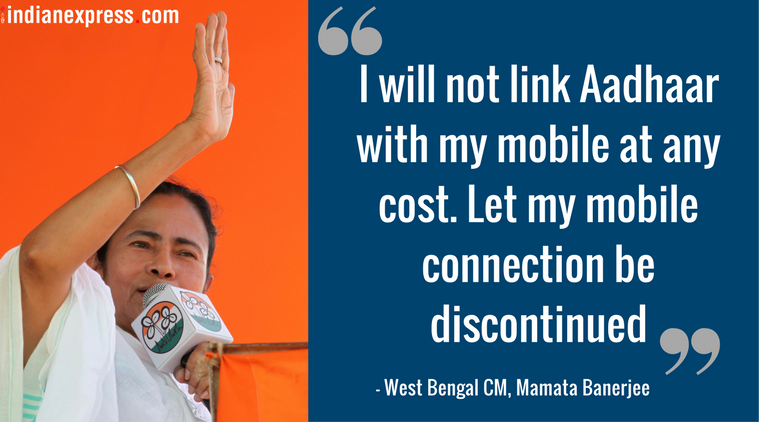 In a statement to PTI, Mamata Banerjee said ‘she will not do it’.

“I will also ask more and more people to protest in the same way. This linking of Aadhar with mobile is an attack on personal privacy. Even person conversation between a husband and a wife will be public then. There are certain personal matters which cannot be made public,” she added.

Department of Telecom (DoT) had called for linking of mobile numbers with Aadhaar on March 23.

The West Bengal CM has been protesting against what she calls imposition of Aadhaar on common people. In June 2016, Bengal CM said she will write to the Centre not to make Aadhaar mandatory for MNREGS scheme, since 100 per cent registration has not been fulfilled. In April this year, Mamata also took a dig at the Centre for Aadhaar like identification for cows.

Earlier in February this year, the apex court had directed the Centre to put in place within a year a mechanism to scrutinise the identity details of over 100 crore existing as well as future mobile phone consumers. The Supreme Court had suggested that the existing pre-paid mobile users, who are 90 per cent of the total mobile users, may be asked to give identity details at the time of re-charge as done while giving fresh SIM cards to users.

Bt Brinjal poses a risk to health, environment: Greenpeace report
Karnataka - Sikh man beaten up by mob in Gulbarga on May 19 #WTFnews
Overseas, Culture of 'Impunity' for US Soldiers Guilty of Sexual Assault #Vaw
Post-Covid, people would look to Ambedkarite, Marxist and Socialist ideologies for direction