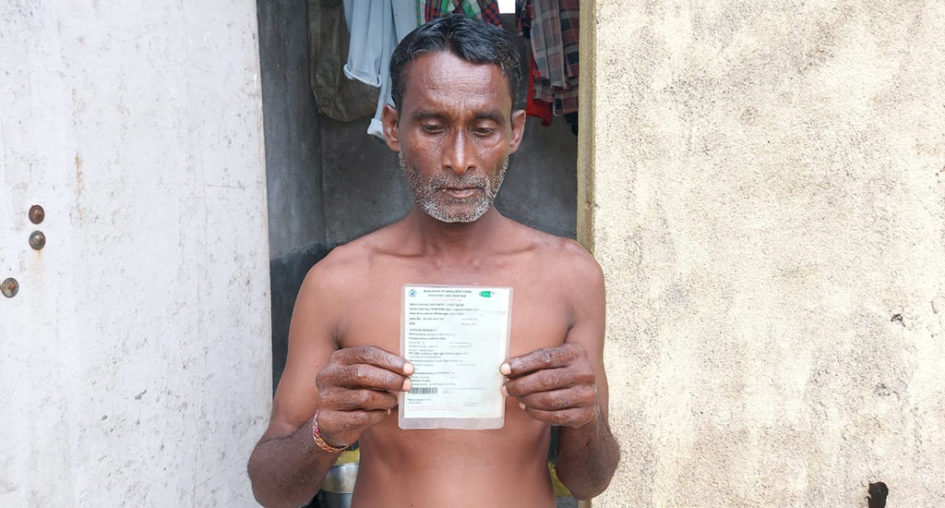 Jogendra Nikhunti, seen here showing his ration card, could not get government entitlements, since he is yet to link his Aadhar and ration cards (Photo by Tazeen Qureshy)

Linking of Aadhar with ration cards and bank accounts, mandated to weed out fake beneficiaries of government entitlements, has left many without much-needed benefits during the lockdown

For the last one year, 50-year-old Jogendra Nikhunti’s life has been confined within the four walls of a toilet. Nikhunti is a daily wage laborer in Jampali village of Lakhanpur administrative block in Odisha’s Jharsuguda district.

Nikhunti’s house was damaged during the monsoon last year, forcing him to take shelter in the unused toilet constructed under the Swachh Bharat Mission. Unable to secure a house under the Pradhan Mantri Awas Yojana (PMAY), he has been living in the unused toilet, in which he can barely fit.

To add to his woes, for the last few months he has not received the ration he was getting under National Food Security Act. With no house and no food, he takes up labor work to earn enough to afford a meal; but often he is dependent on others.

“I had approached the administration several times through villagers for issuing a house and ration to me. But I was told there is some problem with my Aadhar card,” said Nikhunti, unable to understand the issue. The problem is a result of non-linking of his Aadhar with his ration card and his bank account.

In another incident during the lockdown, 46-year-old tribal Dukhi Jani of Odisha’s Nayagarh district died allegedly due to starvation. The non-government fact-finding team that had visited her village found out that the widow had been struck off the ration list due to non-linking of Aadhar with her ration card.

In Odisha, there are several thousands of cases like that of Nikhunti and Jani, where eligible beneficiaries could not receive government entitlements since they had not linked their Aadhar and ration cards. It became more difficult for them, as the entitlements would have been of help to them during the pandemic.

Last year the Odisha government mandated linking of ration card with Aadhar to get benefits under the National Food Security Act. The extended deadline was set as 15 September, 2019.

A survey conducted by food rights activists stated that approximately 18 lakh eligible beneficiaries had been left out due to the government mandating that Aadhar and ration card be linked. On learning of vast number of people deprived of benefits, the government started redressing the cases.

However, the problem has increased during the lockdown, as the redressal system remains out of place, affecting the vulnerable sections further. Fewer officials on ground in the last six months during the lockdown means that the eligible beneficiaries have been left out.

“The schemes were introduced to benefit vulnerable sections of the society. But now, the complicated process is putting pressure on the beneficiaries,” Laxmidhar Singh, an activist, told Villagesquare.in. “The aged, the disabled and those living in remote and tribal areas have to run from pillar to post to get their rights.”

Laxmidhar Singh recalled an instance where a visually impaired person was being denied social assistance because the officials couldn’t scan his retina. “The government should have thought of some other means to identify the ghost beneficiaries – the number of which is too less. The eligible beneficiaries are being left out because of this reason,” he said.

Though the mandatory linkage has affected lakhs of people, the disabled, the elderly and the transgender community have been affected the most. Though the Odisha government recently announced a special category for the disabled without Aadhar card, there is no similar provision for senior citizens.

When the system was introduced, the gender input had only male and female categories. After transgender category was added, many transgenders tried to change it to retain their identity. However, activists allege that it is a lengthy process to make the changes.

Not everyone could get the fingerprint and biometric verification done, as the process was minimized or suspended in most of the offices. “ Most of them lost their livelihood; due to mandatory Aadhar linking they could not get subsidized ration and pension,” said Singh.

In July and August this year, the state government dispatched letters to the district administration to release pension payments to only those accounts that had been Aadhar-linked.

The order meant that pension beneficiaries under National Social Assistance Program and Madhu Babu Pension Yojana would not get the pension if their bank accounts had not been linked with Aadhar.

A report released by the Odisha chapter of Right to Food Campaign, estimated that almost 11 lakh beneficiaries would lose out on the benefits with the move to mandate Aadhar verification. Amidst public concerns, the government revoked its order on 27 August.

Though Odisha has introduced and implemented its own social assistance schemes, many crucial ones are centralized. Any lacunae in the implementation of the schemes prolongs the process and leaves the local administration with little scope for redressal mechanism.

“Even if the local administration is emphatic to the condition of those left out, it has little scope of solving it on its own,” Sameet Panda, co-convener of the Odisha chapter of Right to Food Campaign, told VillageSquare.in.

“For instance, if there is any technical error, the local administration won’t be able to disburse ration or pension unless there is a clearance. So, the whole system is crippled,” he said. Due to non-availability of officials during the pandemic, the affected beneficiaries did not have access to the redressal mechanism.

Every time an eligible beneficiary does not get his or her entitlement and it crops up on social media, the state government intervenes and sorts it out. So far, the redressal mechanism has been more on a case-by-case basis.

“Pandemic has affected the economically stable. Imagine the plight of those who were vulnerable already,” said Panda. “The entitlement is for people based on certain criteria like income, poverty status, etc. Now, with this linkage, we have denied them their basic rights.”

“The mandatory linkage was introduced to weed out ghost beneficiaries, but the policy makers have not given a proper definition of it,” said Panda. According to him, there is a strong policy in place, but the problem is yet to be defined.

Tazeen Qureshy is a Bhubaneswar-based freelance journalist. Views are personal.