** SA police lied over mine shootings South African police lied about the Marikana shootings last year, in which 34 striking miners were killed, a commission of inquiry says. 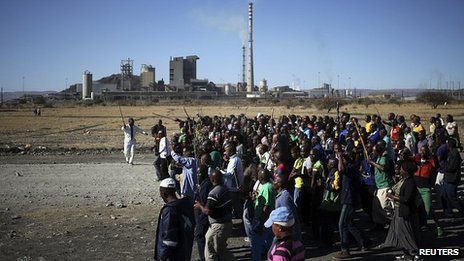 South Africa police ‘lied over mine shootings’ Miners chant slogans as they march past the Lonmin mine during the one-year anniversary commemorations to mark the killings of 34 striking miners by police (August 2013) Miners marched past the Lonmin mine to mark the anniversary of the shootings South African police lied about the Marikana shootings last year, in which 34 striking miners were killed, a commission of inquiry has said. Police falsified or withheld documents, and gave false accounts of events, it said. The police shooting of the miners at the Lonmin-owned platinum mine in August 2012 shocked the nation.

The police said they were acting in self-defence, days after two officers had been hacked to death by protesters. The commission was appointed by President Jacob Zuma to investigate the deaths of the 34 miners – the most deadly police action since the end of white minority rule in 1994.

Its statement comes just 10 days after gaining access to police computer hard drives and previously unseen police documents. “We have obtained documents which the SAPS [South African Police Services] previously said were not in existence…

“We have obtained documents which in our opinion demonstrate that the [police] version of the events at Marikana… is in material respects not the truth,” the commission said. It said the material which had come to light had “serious consequences” for its future work. The hearing was adjourned until Wednesday, while the commission reviewed the “thousands of pages” of documents, and sought to obtain access to additional hard drives and electronic records.