Marking #WorldRadioDay, UN officials urge use of radio as ‘lifeline’ in human progress 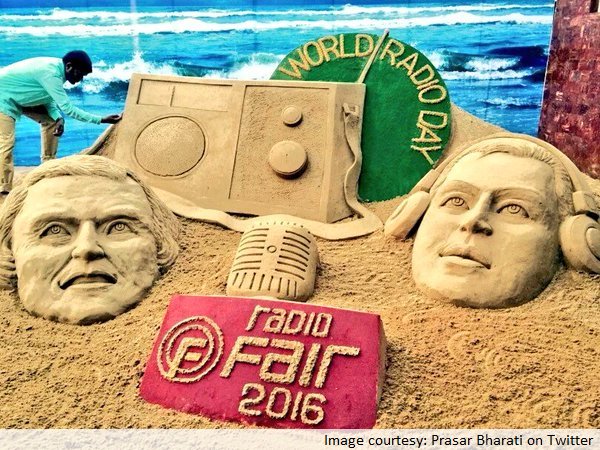 Sudardan Pattnaik creates Sand Art at RadioFair in Bhubaneswar, Odisha on the occasion of #WorldRadioDay

12 February 2016 – The international community should strive to find ways for radio to do even more to help people during responses to the increasing number of emergencies and disasters facing the world, top United Nations officials said today, ahead of World Radio Day, celebrated each year on 13 February.

“In times of crisis and emergency, radio can be a lifeline,” said UN Secretary-General Ban Ki-moon in a statement on the Day.

“For people in shattered societies, or caught in catastrophe, or desperately seeking news, radio brings lifesaving information,” he added.

Noting that radio can help in emergency response operations, assist with rebuilding and give voice to local people and communities, Mr. Ban called on the internationally community to use the time in the lead-up to the World Humanitarian Summit in May to ensure that radio continues to improve in helping people in emergencies.

In another message for the Day, Irina Bokova, the Director-General of the UN Educational, Scientific and Cultural Organization (UNESCO), emphasized that radio has demonstrated its power in situations of immediate post-disaster, but also in times of preparedness and recovery.

“Amidst the ruins and in the face of an emergency, the radio is often the first medium for survival,” Ms. Bokova said. “Its durability is an incomparable advantage, often enabling it to resist shocks and retransmit messages of protection and prevention to as many people as possible, better and faster than other media, saving lives.”

Specifically, radio airs tsunami alerts in Japan and Chile, and messages on how to avoid Ebola transmission in Liberia or Zika contagion in Brazil. The medium, which is accessible and offers real-time coverage and reporting, has the capacity to involve the audience and plays a pivotal role in preventing and mitigating disasters and the associated human costs, Ms. Bokova stressed.

In 2011, the UNESCO General Conference proclaimed 13 February as World Radio Day, the day UN Radio was established in 1946. Radio is the most prevalent mass medium, with the ability to reach up to 95 per cent of the world’s population.

As a result, World Radio Day, which this year coincides with the 70th anniversary of UN Radio, aims to celebrate radio as a medium; to improve international cooperation between broadcasters; and to encourage major networks and community radio alike to promote access to information, freedom of expression and gender equality over the airwaves.

News Tracker: past stories on this issue