May Day: US workers’ struggle, then and now

A bloody assault on striking coal miners 100 years ago helped shape the fight for workers’ rights in the US. 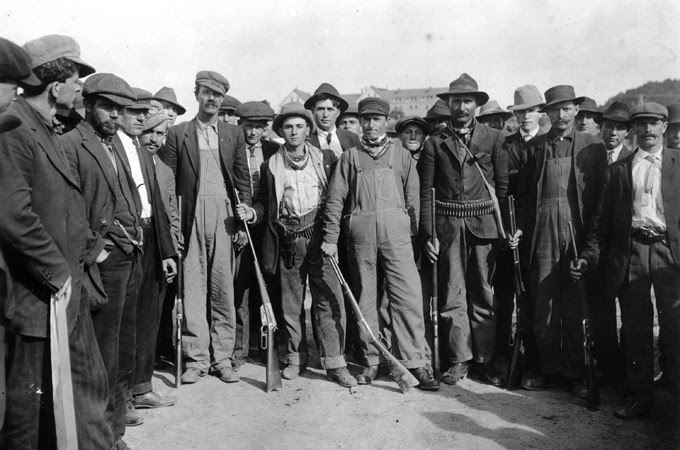 One-hundred years ago, striking American coal miners armed with Winchester rifles were caught off-guard by the sharp repeat of rounds fired into the Ludlow tent colony in southern Colorado.

Over 8,000 miners had faced a harsh winter with their families in encampments dotted along a steep canyon near the mines, striking against John D Rockefeller’s Colorado Fuel & Iron Company for fairer working conditions and the right to organise.

For hours on April 20, 1914, a firefight between camp guards and the Colorado National Guard created chaos. By nightfall, soldiers set a fire that whipped through closely pitched tents, chasing miners and their families out. Two women and 11 children remained huddled in the colony’s infirmary tent, hidden in a cellar dugout to wait out the gun battle. Unable to escape, they suffocated beneath the flames. It remains unclear how many others died that day.

The funeral processions held for the women and children who died at Ludlow ignited smouldering anger among miners who went into a full force 10-day guerrilla war, systematically destroying company property and sabotaging the mines.

The Ludlow Massacre marked a major upheaval in an era dominated by rapid industrialism and the protests of a new labour force pushing back against exploitative working conditions and mechanisation. On May 1, commonly referred to as “May Day”, marches around the world commemorate labour struggles that harken back to this period.

May 1 was declared International Workers Day in 1889, and the first protests were called to advance the campaign for an eight-hour workday, and to commemorate the “Haymarket martyrs“ – eight strikers who were erroneously convicted of killing a police officer during a strike that took place at a factory in Chicago, Illinois in 1886. Four were sentenced to death.

While neither of these tragic historical events resulted in substantial reforms, working-class discontent was growing, and subsequent decades saw movement towards change.

Strikers and activists finally achieved victory when in 1935 President Franklin D Roosevelt signed the National Labor Relations Act, also known as the Wagner act, into law. It legalised and codified unions and collective bargaining for non-agricultural and non-governmental employees, and is widely considered to be the most important labour legislation enacted in the United States. Other important labour laws were close behind.

Demands then considered radical have become largely integrated into mainstream codes of acceptable labour conditions today. But the viability of unions is being thrown into question and worker protections have yet to fully penetrate some workplaces in which violations continue in plain sight so many decades later.

At their height, unions were a powerful force in US politics. Membership peaked in the 1950s at a rate of nearly 35 percent of the workforce and most industries were largely unionised, including automobiles, steel, and textiles. According to the Bureau of Labor Statistics, membership rates have fallen significantly, registering at 11 percent in 2013.

According to George Lovell, chair of the Bridges Center for Labor Studies at Washington University, there has been a shift in attitudes.

“Beginning around the 1980s, employers became much more active in trying to fight unions, and there was a growing anti-union industry of law firms and consultants. Companies now have become much more aggressive in trying to block or destroy unions,” Lovell told Al Jazeera.

For big business, the issues are seen through the lens of free enterprise and the right to make a profit without restraint from the demands of organised workers. Corporate leaders view unions as corrupt havens for lazy, overpaid employees.

Horace Cooper – of the National Center for Public Policy Research – is a former chief of staff for the Department of Labor’s Employment Standards Administration. He told Al Jazeera the role of unions is incompatible with “marketplace solutions”.

“The perception that goes ‘I’m a member of the union my job is safe’ has the consequence of making it easier for people who are not going to be enthusiastic to occupy the spot that someone else – who might be more enthusiastic – could,” Cooper said.

A union perspective sees things differently – through the lens of worker exploitation and their role as the necessary voice of labour against being overworked, underpaid, exploited and exposed to unsafe working conditions by powerful industries whose goal is to profit at the expense of the workforce.

Technological advancement has facilitated the mobility of big business. Jobs can be moved overseas or sub-contracted out to cheaper labour, avoiding costs associated with collective bargaining or labour restrictions. Sub-contracted positions can often fall outside the purview of the Wagner Act, encouraging a drop in unionisation.

Corporate mobility has allowed a global hierarchy of dangerous labour conditions to emerge, exhibited by industrial tragedies such as the Rana Plaza factory collapse in Bangladesh, which commemorated its one-year anniversary this month.

Today’s energy jobs today bear little resemblance to those of the Ludlow miners.

Technology has revolutionised coal mining and though a much safer work environment now exists, there are still serious concerns. Laws such as the Federal Mine Safety and Health act of 1977 have institutionalised much-needed safety standards, but troubling incidents in recent years have shown that enforcement remains an issue.

In 2010, an explosion at Massey Energy’s Upper Big Branch mine in West Virginia, killed 29 of the 31 miners on site.  A federal investigation revealed a list of serious violations at Massey, including intimidation of workers who advocated safe practises and falsification of safety reports. Massey CEO Don Blankenship was indicted in the media as the “Dark Lord of the Coal Industry”, and resigned shortly after. Massey President David C Hughart pleaded guilty to charges ofcriminal conspiracy.

A similar event played out in 2007 when nine miners were killed in a collapse in a Murray Energy mine, Crandall Canyon in the state of Utah. The operator, Genwal Resources, pleaded guilty to violating mine safety laws and paid a $500,000 fine in an agreement stipulating no charges be filed against any other parties connected to the event.

A series of reports by the Center for Public Integrity in October of last year revealed collusion by the industry to deny health benefits for miners who suffer from black lung disease.

The coal industry represents the largest political contributor of all mining industries with contributions of $15.4m in the 2012 US elections.

In other sectors, there are other concerns. In Minneapolis, Minnesota, a new organisation, Centro de Trajabadores Unidos en Lucha (CTUL), or The Center of Workers United in Struggle, is helping retail cleaners organise for better wages.

CTUL’s “Campaign for Justice in Retail Cleaning” was launched in response to a drop in wages for janitorial workers, according to its own report, from $10-$11 an hour to just above the federal minimum wage of $7.25 an hour in the past 10 years – while workloads “nearly doubled”.

Retail cleaners are increasingly hired by big corporations through sub-contractors who, encouraged to bid competitively, are driving down wages for workers. This structure also divides the workers from one another, making union organisation less likely.

“What we are seeing is a restructuring of the economy in which corporations with lots of power are disconnected from the workers themselves,” said Veronica Mendez Moore at CTUL. “When unions were in their heyday, people were working in factories, in communities. Now people are isolated.”

Sandra Miranda, 31, has worked for a retail cleaning sub-contractor for the past nine months and participates in CTUL’s campaign.

In an interview with Al Jazeera, Miranda described her heavy workload, cleaning large retail stores together with just one other worker during her shifts. She makes $9 an hour as a cleaning team leader and works seven days a week, roughly six or seven hours per day.

Adequate protective equipment, such as face masks to protect from cleaning chemicals, are often not provided. Miranda, who has developed cysts on her face, said she thinks they are from the chemicals.

Miranda said she isn’t sure how her supervisor might respond were she to complain about the conditions, or if they would respond at all. “It makes me so frustrated to see the way they exploit people. It really makes me angry,” Miranda told Al Jazeera.

She has been participating in CTUL meetings and events for the past six months, and said it filled her with hope that her daughter can have a better life.

Norma Florez Lopez is the director of the “Children in the Fields” campaign at the Association of Farmworker Opportunity Programs to create protection for some 500,000 youth who work on large-scale industrial farms.

Under current legislation, agricultural workers are exempt from age limitations that apply in other industries – which means that 12-year-olds can legally work in the fields, and teenagers are allowed to work under legally designated hazardous conditions.

The campaign has worked with US Representative Lucille Roybal-Allard to introduce the Children’s Act for Responsible Employment (CARE), a bill that would end such exemptions.

Big agricultural organisations have launched lobbying campaigns against CARE. Ron Gaskill, from the American Farm Bureau Federation, said the bill is largely geared towards protecting immigrant and migrant worker children, and it goes too far.

“They are focusing more on a lifestyle, that is the migrant farm family lifestyle… But they are automatically suggesting that the solution to those problems are basically to prevent youth from working on farms,” Gaskill was quoted as saying.

Lopez is an activist with personal experience. Her first memories of working in the onion fields start in the third grade – toiling long hours, stooped over and lifting buckets weighing 14-18k. When children cut themselves with the shears used to chop onions from the plants, they were told to rub dirt on the wound to stop the bleeding, Lopez said.

Lopez said she feels lucky that she eventually finished secondary school and attended college – but her email inbox reminds her frequently that she is the exception, not the rule. The National Institute for Occupational Health and Safety ranks agriculture as one of the most hazardous industries, and reports a child dies in an agriculture-related incident roughly every three days.

“Just last week I got the news. Garret Carl Middleton of Colorado was 15 years old and died from massive internal injuries from, again, a farming accident. Every week we get these kind of injuries and deaths that continue to happen to these kids.”