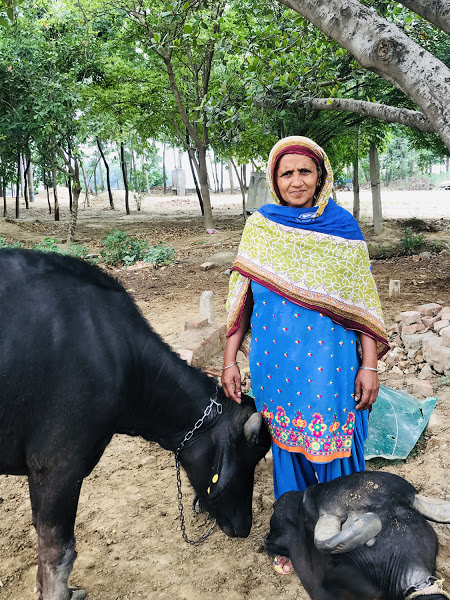 Paramjeet Kaur, a middle-aged Dalit woman, lost her husband a few years ago and raises two children on her own. Landless and at the mercy of the landlords of Balad Kalan, a village in the Sangrur district of Punjab, Paramjeet struggled to make a living . Today, Paramjeet is self-reliant after her community fought for their rights over the village-commons land. Consequently, the COVID-19 lockdown, which has compelled millions to survive on meagre government handouts, did not devastate Paramjeet’s community which now farms the panchayat land on a cooperative model. SANDEEP SINGH

As India enters the third phase of a nationwide lockdown to combat the coronavirus pandemic, the true scale of the devastating effect it has had on the livelihoods of millions is yet to be fully computed. The hardest hit have been the most vulnerable and marginalised sections—migrant workers, landless labourers, daily-wage earners, scheduled castes and scheduled tribes. It was in this context that on 23 April, Gurmukh Mann, a social activist from the Sangrur district of Punjab, wrote to me. Mann, who works on Dalit rights, said, “There are only two ways to survive: the first is an example shown by the people of Balad Kalan village who fought for their rights over the panchayat land, which today led to their drums full of food grains in this severe crisis of the coronavirus pandemic; and the second path is to spread out your hands like a beggar standing in a queue that actually suits the interests of the regimes and the landlords.”

Mann has been involved with movements that organise the landless for over a decade. He had also sent a few images of his “comrade land-tillers” standing in the fields of Balad Kalan. Mann and the fellow farmers hail from a community known as Mazhabi Sikhs, comprising Dalits who embraced Sikhism over three centuries ago. The term was coined by the colonial British administration to categorise them as a separate Scheduled Caste community amongst the Sikhs. One of the men in the images was Avtar Singh, who stood beside a newly bought tractor, holding a red flag that depicted his Dalit community’s belief in Marxist ideology. “Actually, it is roti that matters for survival, and those who have roti do not die of hunger. We now have cattle and fodder for the cattle as well,” Avtar told me.

In 2014, these landless peasants of Balad Kalan first raised their voice for their statutory right over one-third of the village-panchayat land, derived from the Punjab Village Common Lands (Regulation) Act, 1961. The legislation was aimed at consolidating and regulating ownership and rights over village-commons lands in the state. A year later, 188 landless families from the Mazhabi Sikh community won the rights to manage 118 acres—one-third of the total 354 acres of the village-panchayat land of Balad Kalan—on lease in a cooperative model. The families were divided into three groups based on the amount of land allotted and today, each family earns Rs 18,000 biannually, from every crop yield. This is in addition to what the families utilise from each harvest for their consumption. The model has been so successful that even in the midst of the lockdown, the community hired a fellow landless Dalit man, Madan Singh, to plough the 118 acres after the wheat harvest. Madan is paid Rs 11,000 a month besides five quintals of wheat from the harvest, a monetary share from the paddy crop and rights to procure a fodder for his two cattle heads. According to Mann, the landless Dalits’ successful struggle for self-reliance is what ensured their survival during the lockdown which has left most of India’s informal workforce destitute.

According to Section 6 (1) (a) of the Punjab Village Common Lands (Regulation) Rules, 1964, “one-third of the cultivable land proposed to be leased, shall be reserved for giving on lease by auction to the members of the scheduled caste only.” Mann told me that till 2014, politically influential landlords in the village used to misuse this provision by forcefully fielding their nominee from amongst the Dalits during the auction. He said the landlords then practically cultivated the land themselves, “with the poor successful bidder named in papers only.” He told me that year, the landless Dalits objected to the farce of the auction and were lathi charged by the police in response.

“We organised them and posed a heavy resistance to such a superficial auction for the first time in 2014. There was heavy deployment of cops when the dhanaad”—landlords—“with their majority in the panchayat attempted to stage manage the auction for the second time at the premises of the block development and panchayat officer at Bhawanigarh.” About ten kilometres from Balad Kalan, Bhawanigarh is the seat of the tehsil headquarters. Mann said that “it was our women who were on the forefront to bear the lathi blows.”

One of those women was Paramjeet Kaur, a middle-aged widow with two children. Paramjeet, who is now self-reliant, told me, “It is the fruit of a five-year-long struggle in which our women bore the lathi blows of policemen several times during the agitations.” She added, “Today, we grow vegetables and fodder for the cattle, besides the wheat as our main crop.” She said that in case she harvests the fodder, she would pay for the same out of her earning of Rs 18,000.

Avtar echoed Paramjeet and said that before the movement of 2014, “several families here in this village were starving, dependent on, and at the mercy of the landlords who exploited the situation.” He added, “Our women also faced sexual harassment during their pursuance to cut fodder from their fields or even from the roadsides.” But now, he said, he felt pride in being a part of his historically landless peasantry class that is self-reliant in terms of foodgrains for survival. “Foodgrains are essential to survive, and we have enough now,” he said.

He explained that the 118 families are now divided into three different groups, each cultivating 345 bighas, 108 bighas and 117 bighas, respectively, in a cooperative model. He said the last harvest was of paddy which yielded Rs 18,000 to each family of his group. In addition, the groups collectively managed two lakh rupees in savings, which was used to buy a second-hand tractor, at a cost of Rs 2.6 lakh. “Managing the remaining Rs 60,000 was not a problem, as we all pooled in,” Avtar said.

The story of Balad Kalan is not an outlier. The Mazhabi Sikhs of Balad Kalan and two neighbouring villages, Jhaloor and Jhaneri, organised under the banner of the Zameen Prapti Sangharsh Committee—a left-oriented coalition of landless labourers and marginalised farmers, which is active in various districts of Punjab. In 2016, a 72-year-old Dalit woman of Jhaloor died after she was attacked by the landlords of the village during a protest against a similar dummy auction. The landlords were upper caste Jatt Sikhs, historically a land-owning caste that maintains a stronghold over majority of the farm land in Punjab. The Dalits of Jhaloor had objected to the auction of cultivable panchayat land in the village—16.5 acres, one-third of the total 49 acres.

“It was only after we raised a revolt under the ZPSC that we got these 16.5 acres in 2018,” Gurdas, one of the members of the committee from Jhaloor, told me. “We 15-20 families do farming on a cooperative model on this 16.5 acres now, on which we grow haraa”—fodder for the cattle—“with wheat as our main crop over 15 acres,” he said. Gurdas told me that during the lockdown “we all have sufficient grains to survive, because we do farming on our own land now.” He added, “The government is already exposed” because of the state’s inability to ensure efficient delivery of essentials, “but we have enough of our own.”

Mukesh Maloud, from Maloud village in the adjoining Ludhiana district, is the president of the zonal committee of the ZPSC, which now has a one-room office in Sangrur. “Our movement has so far been successful in 55 villages now, in Sangrur and Patiala district, where the Dalits get their share in land through genuine auctions,” Mukesh said. He said that there were 55 such villages, “each is a success story of the class struggle—Bharo, Bhattiwala, Gharancho, Tolewal, Mudowal, Dhandiwal, Rangia, Badrukha, Kalara, Ghawda, Harigarh, Khori Kalan, Kheri Baba Dalersingh Wala, Wadera, Baura and Deh Kalan.”

Paramjit Kaur Longowal, the secretary of the ZPSC, told me about Badrukha village where around forty Dalit families began cultivating eight acres last year, after they won the rights to the land in an auction. Longowal said that their “democratic struggle” lasted five years but now the families were self-reliant. “We can say that the landless Dalit families in eight to ten villages are totally self-reliant to an extent that they were capable of sharing their stores with a few poor migratory families from other states during the lockdown,” she said. These villages included Jhaneri, Balad Kalan, Balad Khurd, Gharancho, Badrukha and Mander Khurd.

The Punjab Khet Mazdoor Union is another organisation like the ZPSC that works for the rights of landless peasants in the state. Tarsem Khunde Halal is a district chief of the union’s chapter in Mukstar district. Halal, however, was not very optimistic about the movement’s spread. “A majority of the villages in the southern most districts, like Bathinda, Muktsar and Mansa have very less panchayat land as of today,” he said. He told me that the big zamindars had encroached upon the huge pastures of village-commons lands, “leaving not even two acres as a one-third share for the Dalits.”

Mann had a different take on Halal’s assertion. “This is a fight for the dignity, not only for the land, but a class struggle,” he said. He narrated the example of Tolewal, another village in Sangrur. He told me that in Tolewal, the landless Dalits were agitating for a mere “24 bighas, not even 5 acres, but they are fighting for their rights.”

“Even two acres are sufficient to begin leading a dignified life, as the haraa on this much small piece of land can liberate the Dalit women from being dependent on the landlords for the fodder,” Mann said. He added, “The question is not of faring alone but of a class-struggle for a dignified life as a whole.”