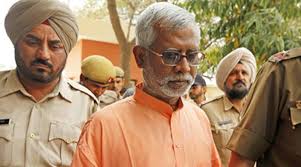 Hyderabad: A key document in the 2007 Mecca Masjid blast case containing a disclosure by Hindu right-wing member Swami Aseemanand, which could seal the fate of the trial, has gone mysteriously missing from a lower court’s custody.

The revelation came after chief investigating officer and CBI SP T Rajah Balaji on Tuesday began recording his evidence. Balaji filed the first chargesheet before the case was transferred to the NIA.

On May 18, 2007, a bomb blast inside the Mecca Masjid during Friday prayers killed nine people and injured 58 others. Later, more people were killed when the police opened fire on protesters. As part of the trial, more than 160 witnesses were examined by the court that includes victim, RSS pracharaks and several others.

Aseemanand was granted bail in April 2017 on the condition that he can’t leave Hyderabad and Secunderabad.

Balaji was taken by surprise after a key two-page document relating to the reported disclosure made by Naba Kumar Sarkar aka Swamy Aseemanand before CBI, explaining the alleged conspiracy, was not traceable. The document, marked as “Memo of Disclosure” No 88 in NIA chargesheet, reportedly contains names of senior RSS leaders.

The missing document is believed to be of much importance and can seal the fate of Aseemanand in the case, investigators said.

During investigation, the CBI officer examined 68 witnesses in the case, out of which 54 have turned hostile, including DRDO scientist Vadlamani Venkat Rao, who is the prosecution witness No 151 in the case.

BIG BLOW for #Vedanta as Dongaria tribals reject mining on Niyamgiri hills #Indigenous
No to RCEP : India must walk out of ongoing negotiations is the overwhelming demand from farmers and...
Happiness Quotient Vedanta’s corporate campaign sparks off a controversy
#India - Police says' stay indoors to avoid sexual harassment on streets" #WTFnews #morapolicing #Va...