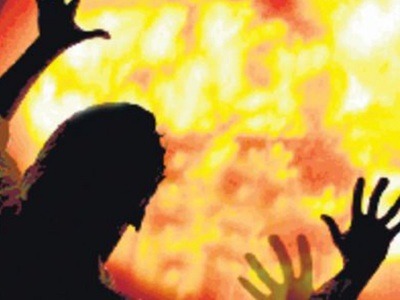 Five workers in Sonepat, Haryana, burnt to death, including a woman worker with her child on her chest. Sixteen jumped from the third floor to various serious injuries. But nothing appears in the news. This is not some random incident, either. Workers work almost as bonded labourers for a pittance. In the entire area, there is no ESI, no Provident Fund, no labour laws, no pretence of safety measures, no union, only ‘acche din‘.
Below we reproduce a fact-finding report done by members of four workers’ organisations (InqilaabiMazdoor Kendra and Nagrik Akhbaar, Jan Sangharsh Manch Haryana, Mazdoor Patrikaand Grameen Mazdoor Union, Bihar) who visited the area on 20 March. English translation by Manali Chakrabarti.
See also Hindi version of report (PDF)

Fiery Death of Workers in Real Paint Factory in Rai Sonepat : A Fact Finding Report
Several workers met painful death due to a fire which broke out in Real Paint Factory in the Rai industrial estate in Sonipat Haryana. According to official sources the number of casualty in the accident is four. A fact finding team constituting of representatives of Inqilaabi Mazdoor Kendra and Nagrik Akhbaar, Jan Sangharsh Manch Haryana, Mazdoor Patrika and Grameen Mazdoor Union, Bihar went to the site of the accident on 20th March, 2018. The team prepared the following report based on their physical inspection of the site and conversations with workers working in nearby units.

The Rai industrial estate is situated in Sonepat district of Haryana. It is on the G T road, between Delhi and Sonepat, around 47 kms from ISBT Kashmiri gate Delhi. The factory which caught fire was situated on plot number 291. 292, 293 on Rai industrial estate. The factory used to manufacture industrial paint for automobiles. On 20th March when the investigating team reached the site, smoke was still emanating from the factory.

There were some workers standing in front of the factory who worked in factories nearby. Three policemen were seated on chairs along with a journalist from Punjab Kesari and some persons from the Intelligence Bureau. The workers informed us that the fire broke out on the night (17th – 18th March) around 2.30 am. The factory used to produce paint thinner which is extremely inflammable and that there was a huge stock of paint thinner and solvent inside the factory. Thirty four workers worked in the factory but there is no conclusive information as to how many were working when the fire broke out. According to people nearby, five persons have already died due to the accident while police and intelligence report claim four deaths. The workers told us that sixteen workers saved themselves by jumping from the third floor of the factory. Many of them got charred, one of the female workers broke her spine and the rest too are in very critical condition. They have been sent to PGI Rohtak and Khanpur Kalan for treatment.

When we reached the site we found that the main door of the factory was unlocked and open – in fact the metal door had melted and was completely deshaped indicating the intensity of heat the fire would have caused. We could see a pile of paint cans inside. The workers informed us that one of the worker’s dead body was found stuck to a can of paint and another’s charred skeleton was found near the stairs. Like the factory in Bawana Delhi, there was a metal grill in front of the gate and the factory premises had only one exit which used to be kept locked. In spite of producing highly inflammable substance the factory had only one gate. The factory seemed like a prison where the workers were made to work like indentured labour, and that too at a grave risk to their lives – there were no safety norms followed. The basement had an enormous tank to store chemicals – the storage capacity was 15000 litres.

The factory was a three-storey building and the workers and their families lived in the same building. Production facilities were in the first two floors (ground floor and the first floor) – 5 workers used to reside on the first floor and 16 people lived on the third floor. A woman and her child got burnt to death in one of the rooms on the third floor – she was clutching her child to her breast when they died. One of the workers is still feared to be trapped under the debris. It was evident from the remains that none of the mandatory safety norms were followed in the factory. According to the norms at least 40 percent of the space of the plot in which a factory is constructed (around the building) has to be kept free. In this case there were thick sheets of iron covering the space, the same as in every other factory building in the vicinity. All the factories had generators and compressors on their roofs, which could lead to a serious mishap at any time. The real cost of human lives in profit driven economy was evident from the accident we had gone to investigate and those waiting to happen.

Rai industrial estate was established in 1995-1996. At that time the going wages was Rs 1200 to Rs 1500 a month. The employers on principle did not employ local workers; most of them were migrants from Bihar and Uttar Pradesh. The Rai industrial estate mostly constitutes of tiny units and the workers are given the lowest wages in the entire Delhi NCR region. On an average a male worker earns Rs 8000 per month for an eight hour shift while female workers earn  Rs 4500/-, way below the legal minimum wages declared by the Haryana government which is Rs 9600/- for unskilled workers, Rs 10826/- for semi-skilled workers, Rs 11429 for skilled workers and Rs 12900/- for highly skilled workers.

Workers informed us that helpers could manage a monthly wages of Rs 9000-10000 by working 12- hour shifts. Further only 20 percent of the factories in the area had registered their workers for ESI facilities. In any case the so-called ‘reforms’ by which the central government is conspiring to dismantle labour laws in the interests of the capitalist class, have already been implemented in the BJP ruled states including Haryana. Thus in Haryana the capitalists have been offered complete freedom to exploit their workers unhindered by either any legal constraints or any sanctions by the government.  The situation is not likely to improve unless there is a collective resistance by the workers.

The police officials present (including a sub-inspector) refused to answer our queries on the case. The only information we could gather was that the owner Mr Gulshan Mata was on the run. The owner Gulshan Mata, his son Abhishek Maata, and the manager Meenu and three supervisors have been booked under section 304 A of the IPC – causing death due to negligence. It is telling that while the police routinely slap workers with much more serious charges including murder, treason, sedition, Gangster Act, etc., they seemed to get all soft and generous when it comes to the crimes of the owners and their henchmen.

The state government has announced compensation of Rs 5 lakhs for the dead, and Rs 1 lakh for the injured. Though one wonders what difference would a lakh rupees make to a worker (or his family) who has been rendered permanently invalid.

On 22nd March, we came to know through an associate, that the government and the administration have not been following up with the 8 severely burned workers admitted in PGI Rohtak. The announcement made by the government of ensuring proper medical attention to the injured workers was all in the air. One of the workers in a very critical condition has been referred to Safdarjung Hospital New Delhi for treatment.

The state of the factories in Rai industrial estate and the work conditions would lead anyone to conclude that the painful deaths of these workers were not due to an accident but were wilful murders in ruthless pursuit of profits.