Meet Archana Soreng, A Tribal Climate Warrior From Odisha Who Aims To Bring The Indigenous Wisdom To Climate Actions 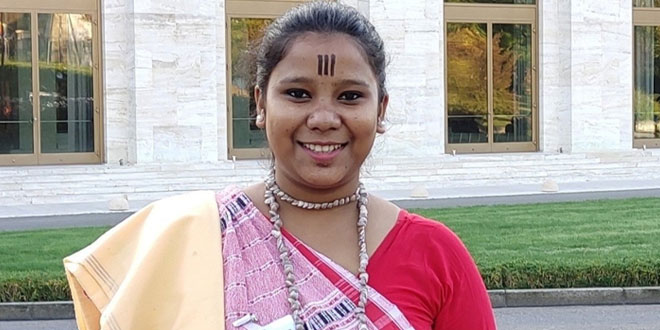 New Delhi: According to the United Nations Intergovernmental Panel on Climate Change (IPCC), for better management of forests for climate mitigation, it is important to empower indigenous people and enhance local community collective actions. And this is what 26-year-old Archana Soreng from Odisha’s Khadia tribe has been doing. Even as a teenager, she was raising awareness about climate change. Chosen as one of seven members of the UN Secretary General’s Youth Advisory Group on Climate Change, Ms Soreng firmly believes that any climate action will be fruitful only when the indigenous people, who live in close harmony with nature, are included in it.

Ms Soreng, who was inspired by her late grandfather and late father, both tribal leaders in their village in Sundergarh district, to understand more about her tribe and gain the wisdom of her ancestors, has dedicated her life towards documenting indigenous practices including healthcare, environment preservation, forest protection, agriculture and lifestyle. She has been working with tribal communities and forest dwellers and is also a part of an initiative called Adivasi Drishyam that creates videos on indigenous wisdom. While talking to NDTV about her work, Ms Soreng said,

It is important to document indigenous practices of the tribal and forest-dwelling communities, and do so in different formats so that these become accessible to all people who want to learn and apply in their daily lives.

Ms Soreng, who did Masters in Regulatory Governance from Tata Institute of Social Sciences (TISS) is now working as a Research Officer at TISS Forest Rights and Governance Project, Odisha. She is also an active member of the Official Children and Youth Constituency to United Nations Framework Convention on Climate Change (YOUNGO). She said to NDTV,

Indigenous communities across the globe are extremely vulnerable to climate change despite their sustainable lifestyle because they are completely dependent on the environment. This is why I use research and advocacy to mobilise people to bring the indigenous perspective into climate action.

Indigenous Methods And Tools Show The Way To Living Sustainably: Archana Soreng
As the negotiations at the COP26 climate summit in Glasgow in the United Kingdom continue, where several countries, including India, are in discussion to limit global warming to 1.5 degrees Celsius over pre-industrial times, Ms Soreng calls for the inclusion of the indigenous communities as the drivers of climate actions for achieving the set targets. Ms Soreng, who is at the COP26 for amplifying the voice of the indigenous people in the climate action discourse and lead the youth in the fight against climate change, said,

Indigenous Peoples should be leaders of climate actions and not victims of climate policies. The methods and tools used by the tribals in their daily lives, for green living, rainwater harvesting, organic farming, preserving the biodiversity, if adopted at a larger scale by other people, it will help in preserving the environment and fighting climate change.

Tribal communities also contribute to providing an alternative in terms of solving the global plastic problem, she said.

They collect leaves from the forest and stitch those together to make plates. They use grass, to make chairs, coconuts to make resistant ropes for beds and twigs to brush their teeth. Because it is biodegradable, it can be an alternative to plastic, which can be adopted by the people in the cities, Ms Soreng added.

She further said that tribal communities do not receive due credit for their contribution towards environment protection and often face exploitation when their products are purchased by retailers as they receive very low compensation compared to the price at which their products are sold to customers. She said that as the world shift towards a more sustainable model, the inputs of tribal communities must be recognised and supported so that they can play a bigger role.

Indigenous People Are The Guardians Of The Forest: Archana Soreng

According to Ms Soreng, indigenous communities are the pioneers of forest protection efforts. A lot of tribal and forest-dwelling communities follow a practice that is called ‘Thenga-Pali’ in the Odia language.

‘Thenga’ means stick and ‘pali’ means turn. Under this practice, tribal women have been voluntarily guarding the forest against timber smugglers and poachers for decades. Armed with sticks, these women go in a group for patrolling around the forest and after coming back they keep their stick in front of the houses FOR the next group of women.

Tribal communities are the guardian of forests and cannot be excluded from the efforts to maintain and create new carbon sinks (a forest, ocean, or other natural environment that can absorb carbon dioxide from the atmosphere), she said.

Reclaiming Space For Indigenous Voices On The Global Front
Talking about being a member of UN Secretary General’s Youth Advisory Group on Climate Change and engaging on both local and global front, Ms Soreng said,

I am very grateful and happy. I am here because of my community. I am the second-generation learner in my family. I believe I have been able to access education because of the sacrifices of my family members, ancestors, and my community. I think I have received a great platform to showcase what I emphasised earlier – to have inclusive dialogues, irrespective of race, background and nationality. It gives me a chance to show that we need to respect and value diverse opinions, so I would definitely like to set an example on those lines.

NDTV – Dettol have been working towards a clean and healthy India since 2014 via Banega Swachh India initiative, which is helmed by Campaign Ambassador Amitabh Bachchan. The campaign aims to highlight the inter-dependency of humans and the environment, and of humans on one another with the focus on One Health, One Planet, One Future – Leaving No One Behind. It stresses on the need to take care of, and consider, everyone’s health in India – especially vulnerable communities – the LGBTQ population, indigenous people, India’s different tribes, ethnic and linguistic minorities, people with disabilities, migrants, geographically remote populations, gender and sexual minorities. In wake of the current COVID-19 pandemic, the need for WASH (Water, Sanitation and Hygiene) is reaffirmed as handwashing is one of the ways to prevent Coronavirus infection and other diseases.

The campaign will continue to raise awareness on the same along with focussing on the importance of nutrition and healthcare for women and children, fight malnutrition, mental wellbeing, self care, science and health, adolescent health & gender awareness. Along with the health of people, the campaign has realised the need to also take care of the health of the eco-system. Our environment is fragile due to human activity, that is not only over-exploiting available resources, but also generating immense pollution as a result of using and extracting those resources. The imbalance has also led to immense biodiversity loss that has caused one of the biggest threats to human survival – climate change. It has now been described as a “code red for humanity.”

The campaign will continue to cover issues like air pollution, waste management, plastic ban, manual scavenging and sanitation workers and menstrual hygiene. Banega Swasth India will also be taking forward the dream of Swasth Bharat, the campaign feels that only a Swachh or clean India where toilets are used and open defecation free (ODF) status achieved as part of the Swachh Bharat Abhiyan launched by Prime Minister Narendra Modi in 2014, can eradicate diseases like diahorrea and the country can become a Swasth or healthy India.

#India - A Child of Labour- dangers of surrogacy #Vaw #Sundayreading
Sayabasachi Panda’s Arrest in Odisha : A Different Perspective
‘I was discriminated against because I am Muslim’ #humanrights
Girl molested, thrown out of train in Karnataka