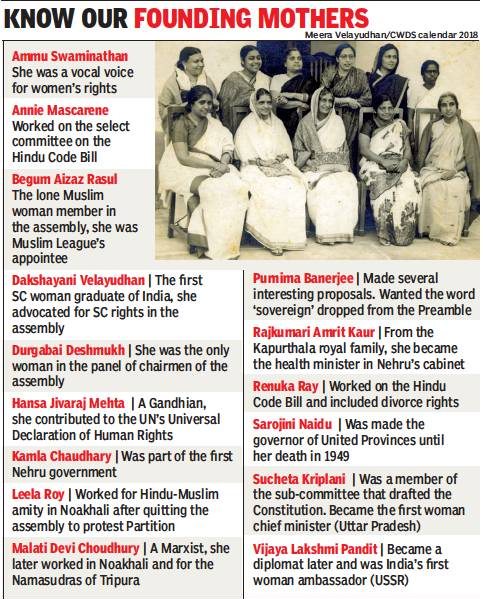 Priya Ravichandran, a marketing professional from Chennai, has been digging out the stories of these founding mothers of India as part of a project that she hopes to turn into a book.

The stories are fascinating. Roy, for instance, quit the revolutionary path and became a member of Indian National Congress in 1939. Then she became a member of Subhas Chandra Bose’s Forward Bloc. In 1942, she took part in the Quit India Movement and was arrested and jailed. “She quit the Constituent Assembly too in protest against Partition. And so did Malati Devi Choudhury,” Ravichandran says.

Choudhury was a Marxist. And she quit because she was uncomfortable with the idea of a constitution that was so heavily borrowed, elitist and inorganic. “There was also a strong belief that despite the granting of adult franchise, the ‘uneducated, poor, & hungry’ were not going to be alleviated, and that the Constitution would not go far enough in giving them a voice. The long, often contentious discussions and drawn out procedures would not have appealed to the restless nature of a woman whom Gandhi nicknamed “toofani”. She stepped away soon after to heed Gandhi’s call for a peace march for Noakhali and to work with the ‘Namasudras’ of Tripura (an avarna group),” Ravichandran says.

Historian Namrata Ganneri agrees that these women have been underrepresented in the national narrative. She says that many of these women had substantial careers before they stepped into the Constituent Assembly. So, they weren’t showpieces in the assembly but strong voices that challenged the status quo. “Women like Renuka Ray who were instrumental in the Hindu Code Reform were stridently opposed by a section of conservative women. Jankibai Joshi, who was president of the All India Hindu Mahila Mahasabha, decried Renuka Ray’s interventions as that of a Brahmo and not representative of a large majority of Hindus. Divorce reform was particularly opposed as western and destroying the sanctity of Hindu marriage,” Ganneri says.

For Ravichandran, it was Durgabai Deshmukh that led her on this quest. “The road I take to work in Chennai is named after her, and I also pass by her brainchild — the Andhra Mahila Sabha. My curiosity about her work and life kickstarted this interest, which is now a full-blown obsession,” says the researcher.

She also says that it took quite a bit of effort to figure out how exactly these women came to be in the assembly and how they contributed to the republic. “For many of them, the personal was intensely political. Vijayalakshmi Pandit, for instance, was directly impacted by property laws when she lost her husband in 1944. Her experiences went to inform her acts when she championed for the reform of Hindu women’s rights in All India Women’s Conference. So, to be able to map these connections, and parse the relationship between the women was challenging. Quite a few of them went completely off-radar after the 1950s, which hampered the search,” Ravichandran says.

Till she embarked on this quest, the Indian republic for her was one built by men, with women on the sidelines. “Sarojini Naidu and her poems, Kamala Nehru and her protests, Kasturba Gandhi, Annie Besant, Aruna Asaf Ali, Lakshmi Sehgal etc are well known but there were these women too: Aruna Asaf Ali’s sister Purnima Banerji, Sehgal’s mother Ammu Swaminathan, all playing a central role. How could we not know about them? How can our understanding of our country be one written by men, and of men?” Ravichandran says.

Women’s Day is a good excuse to read about these pioneering women.

As the President of All India Women’s conference, she was an important voice. A follower of Mahatma Gandhi and a devoted social activist, Hansa Mehta advocated gender equality. She was a champion of education for all and pushed for upliftment of women across the society. She took this social activism to the pages of the constitution, thereby playing a key role in drafting a constitution that was inclusive of all citizens. Hansa Mehta ensured that the Article 1 of Universal Declaration of Human Rights (‘UDHR’) was made inclusive and the phrase “All men are born free and equal” was changed into “All human beings are born free and equal”.

Widely known as Ammukutty, Ammu Swaminathan was an Indian social worker and political activist during the Indian Independence Movement. From Kerala, she was known for her knowledge of the English language, outspoken personality and woman with a political voice. A follower of Gandhi, she had significant participation in Quit India Movement that leveraged the Independence of India. Born in an upper caste family, she was often berated for taking to protest and be part of national movements and for her selfless efforts to advocate equal treatment of all. With her education and activism, later, she became a member of the Indian Constituent Assembly and played an important role in drafting the Indian Constitution. In 1952, she was elected as the member of the Rajya Sabha from Madras constituency. Ammukutty’s daughter was Captain Laxmi Sahgal who was an officer of the Indian National Army, and the Minister of Women’s Affairs in the Azad Hind government.

Begam Aizaz Rasul marked her presence as the only Muslim Woman in the Constituent Assembly of Indian. She was a part of the Muslim League and was one of the handfuls of people who got elected in the Constituent Assembly. Begam was elected as the Deputy Leader of the Delegation and The Deputy Leader of Opposition in the. She made her significant contribution in the drafting the constitution by raising voice against having a separate electorate for Muslims. She found the idea as “self-destructive weapon which separates the minority from the majority for all the time”. Her efforts finally brought consensus among the members and the Constitution was secular in its true sense.

India can never forget the struggles of Dr BR Ambedkar to gain rights for the Dalit community and his contribution to the Constitution. But does India remember the first Dalit woman elected in the Constituent Assembly? She was Dakshayani Velyudhan, the first person from the Pulaya Community to gain formal education, the first woman in the community to wear an upper garment and the first and the only Dalit woman in the Constituent Assembly. Velyudhan joined hands with Ambedkar in fighting against many common issues related to Dalit rights.

A feminist Hindi short story writer and an active participant of the Indian Independence Movement was Kamla Chaudhary, a woman of word and action. She joined the Civil Disobedience Movement in 1930 with Mahatma Gandhi and simultaneously the Indian National Congress. Even though she was put behind the bars by the British, her sheer activism in the Indian Independence movement saw no setback. She became the Vice-President of the 54th All India Congress Committee in 1946. Later, she landed as the member of the Constituent Assembly of Independent India.

Malti Choudhary was an active member of the Freedom movement and Indian National Congress. She participated in Salt Satyagraha with Mahatma Gandhi along with her husband and showcased her vigour as a freedom fighter. She took lead in founding many organisations like Bajiraut Chhatravas for the upliftment of vulnerable communities in Odisha. Malti was elected as a crucial member of the Constituent Assembly in 1948. Even after Independence and Republic were achieved, Malti continued to be an active voice of dissent by protesting against the Proclamation of Emergency by Indira Gandhi. No doubt, Mahatma Gandhi named her “toophani” for her unbeatable activism.

Leela Roy was a radical  Indian politician, social reformer, freedom fighter, a staunch feminist and a close associate of Subhash Chandra Bose.  In 1947, she founded the Jatiya Mahila Sanghati, a woman’s organization in West Bengal. She became the first woman from Bengal to be elected to the Constituent Assembly. In 1960, she became the chairwoman of a new political party that was formed by the merger of Jatiya Mahila Sanghati and the Forward Bloc.

With many brave women freedom fighters of India, Purnima Banerjee’s name has a special mention in Indian History of Independence. She was Aruna Asaf Ali’s younger sister. Banerjee actively participated in the Freedom Movements like Satyagraha and Quit India Movement. It is said that her activism landed her in jail where she completed her Bachelor Degree in Arts. Later she became the b=member of the Uttar Pradesh Legislative assembly and the Constituent Assembly of India.

Renuka Ray was a strong advocate of women rights and inheritance rights in parental property. She was appointed as the President of All India’s Women’s Conference and was nominated as the representative of women to the Central Legislative Assembly. Later she joined with a strong woman’s voice in the Constituent Assembly and helped in drafting the Constitution. She is also known to have established the All Bengal Women’s Union. In 1952-57, she served as the Minister for Relief and Rehabilitation in Bengal Legislative Assembly.

The fearless woman freedom fighter, Amrit Kaur, is an unforgettable name in the history of Indian Independence. She, along with Margaret Cousins,  co-founded the All India Woman’s Conference in 1927 with an aim to promote women and children’s education and social welfare. She was even jailed for her participation in the Dandi March and Quit India Movement led by Gandhi. Apart from her role in the freedom struggle and drafting of the constitution, Amrit Kaur made remarkable contributions in the medical sector. She set up the  Tuberculosis Association of India, the Central Leprosy and Research Institute, was vice-chair of the board of governors of the League of Red Cross Societies and chair of the executive committee of St John’s Ambulance Society.

Known to Literature as the “Nightingale of India” for her wonderful poems, Sarojini Naidu stands as the inspiring feminist, social activist with a revolutionary history of a freedom fighter. She was the first woman president of the Indian National Congress and the first woman Indian State governor. Naidu played a pivotal role in achieving women’s right to vote in India. She went to London along with Annie Besant, to present the case of women’s right to vote to the Joint Select Committee. The effort succeeded as in 1931 congress promised to establish women’s right to vote and in 1947 it was officially enacted with India’s independence. Naidu’s contribution of women’s vote and universal suffrage still resonates in India’s Constitution.

Sucheta Kriplani, a graduate from Delhi’s Indraprastha College for Women, taught Constitutional History in Benaras Hindu University. Later, she was elected as India’s first women Chief Minister, serving in Uttar Pradesh. As a member of the constituent assembly, she was responsible for formulating the document that would be governing the Independent Indian state.

Vijaylaxmi Pandit was an Indian diplomat and politician and became the first woman President of the United Nations General Assembly. Her unbeatable activism in Freedom struggle landed her behind the bars twice, in 1940 and 1942. However, she became a crucial member of the Drafting Committee.

Durgabai Deshmukh was 12 years old when she participated in the Non-Cooperation movement led by Gandhi in 1920. And in 1936, she went on to establish the Andhra Mahila Sabha. A Gandhian by philosophy, she took part in freedom struggle at an early age, became a significant political voice and later became a criminal lawyer. She was a member of the Steering Committee and participated in the Constituent Assembly Debates. Her legal background made her pivotal in drafting the judiciary section of the constitution. Deshmukh brought a significant amendment in the Draft of the Constitution by lowering the age of obtaining a seat in council state from 35 to 30 years.

Indeed, these fearless women of politics, freedom fighters and staunch feminists give us the perspective to revisit the Indian History with and know these unsung contributions. Maybe we are still unaware of more such trailblazing women of history who smile in silence while India celebrates its Republic.