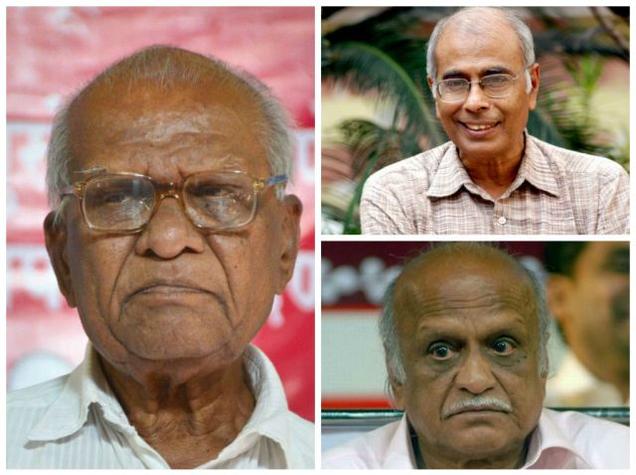 Bullet cartridges in the three killings suggest a common set of killers, accused Sameer Gaikwad and Rudra Patil likely to be commonly involved; Sanatan Prabhat the organ of Sanathan Sanstha has ‘marked’ out Dabholkar and Pansare as ‘targets’ yet the union home ministry tells Parliament that there are no connections?

Presently, the writ petitions of the Dabholkar and Pansare families pressing for fair investigation have been clubbed together by the Bombay High Court after observing the similarity in both the murders. The Sanatan Sanstha, the organization believed to be behind the killings, has even published a photograph of Dabholkar, marked over with a red cross. One Sanatan Sadhak, Malgonda Patil, who was killed while trying to execute a bomb blast in Madgaon, Goa had also written an article in Sanatan Prabhat, articulating the need to eliminate Dr. Narendra Dabholkar. This Malgonda Patil happens to be a cousin of Rudra Patil. The sketch of one of the suspected murderer in the Dabholkar murder case has a striking similarity with the sketch of Pravin Limkar, who is a prime accused in Goa bomb blast case and is on an Interpol red corner lookout notice.
The accused in the Pansare murder case, namely Sameer Gaikwad is a member of Sanatan Sanstha. The members of Sanatan Sanstha have even addressed a press conference in support of Sameer Gaikwad after his arrest.

Other revealing facts have come on record in the ongoing writ petition filed by the Pansare family in the Bombay High Court:

(According to a report in The Indian Express on December 11, 2015 among the angles of investigation being pursued by the three agencies involved –CBI, Karnataka CID and Maharashtra SIT –  is of the possible involvement of four missing members of the right wing Sanathan Sanstha who are accused in a 2009 blast case in Margao, Goa. The four missing persons — Jai Prakash alias Anna and Rudra Patil, both from Karnataka, and Sarang Kulkarni alias Sarang Akolkar and Praveen Limkar from Maharashtra — have been sought by multiple agencies for over six years. “We tried to find them but were not able to do so. Initial investigations showed that they escaped to Nepal. Sometime in 2014, they were reported to have returned,’’ said an NIA investigator who was a part of the investigations into the 2009 Goa blast plot in which two alleged Sanathan Sanstha men were killed while trying to plant a bomb to disrupt a celebration they were opposed to.)

Given all these facts and circumstances, the statement of the union minister of state for home, Mr. Kiren Rijiju made through a written reply to Rajya Sabha (December 3, 2015) that there is no report to suggest any linkage or connection between murders of comrade Govind Pansare, Dr. Narendra Dabholkar and professor Kalburgi is shocking.

We, the family members of Dabholkar and Pansare families, have already expressed our disagreement with his statement as it is contradicts the facts on record. We also wish to know on what basis this statement was made by the minister.

Now, today, when reports of the forensic analysis of the bullet cartridges found at the scene of all three incidents suggests the probable involvement of a common set of killers, it becomes essential that the home ministry of the union government immediately issues a clarification on the previous statement made in Parliament.

Today, when reports of the forensic analysis of the bullet cartridges found at the scene of all three incidents suggests the probable involvement of a common set of killers, it becomes essential that the home ministry of the union government immediately issues a clarification on the previous statement made in Parliament

There is a striking similarity in the modus operandi of these three murders. The three murders have long been suspected to be the handiwork of a right wing group opposed to the outspoken and rational views of the three victims who have consistently criticised the irrational practices and beliefs within the Hindu religious system.

When the investigating agencies in all three murder cases are closely coordinating with each other, how can it be stated that there is no connection between these three murders?  Tracing the absconding Rudra Patil has become an important task for the agencies investigating these murders. Counsel for the CBI, Rebecca Gonsalves on November 30, 2015, even made a statement in the High Court to the effect that two members of the ‘same organization’ are under scanner and their phone numbers are under surveillance.

According to the CBI submission in the Bombay High Court, on November 30, 2015, ninety- five members of ‘a right wing organisation’ were interrogated and their statements recorded. The said organisation was upset with this and therefore made allegations against the investigating Officer, by holding a press conference. The said set of documents has been filed before the Bombay High Court.

All this clearly establishes that the investigating agencies are presently examining the role of the Sanathan Sanstha in both the Dabholkar and the Pansare murder cases. The points listed above sketch the close similarity between the two cases. Hence the statement of the minister of state for home, Kiren Rijiju, in Parliament is misleading and not based on facts.

Besides the records of the investigation mentioned above, both Dabholkar and Pansare were targets of the Sanathan Sanstha, as revealed by other evidence mentioned above. As only Dabholkar and Pansare cases are being heard by the Mumbai High Court, the High Court has not made any comment on the Kalburgi case and hence this statement does not encompass that murder investigation.

We demand that an immediate clarification from the government of the previous statement is made by MOs home, Kiren Rijiju.

1. Signatures of bullet cartridges point to common killers of three rationalists- It is suspected that one particular set of operatives, using two weapons, carried out the three killings.
http://indianexpress.com/article/india/india-news-india/signatures-of-bullet-cartridges-point-to-common-killers-of-three-rationalists/2. Govt: Dabholkar, Pansare and Kalburgi cases are not linked, Dec 03 2015 : The Times of India (Mumbai)
http://epaperbeta.timesofindia.com/Article.aspx?eid=31804&articlexml=Govt-Dabholkar-Pansare-and-Kalburgi-cases-are-not-03122015014054

Threat to Indian Constitution is more serious from the Executive arm of Government having scant resp...
'BJP MP behind murderous attack on me' - Dr Kafeel's Brother
#Chhattisgarh: Abduction of Adivasi Women by A. P Police #Vaw #tribalrights
San Onofre is Dead and So Is Nuclear Power