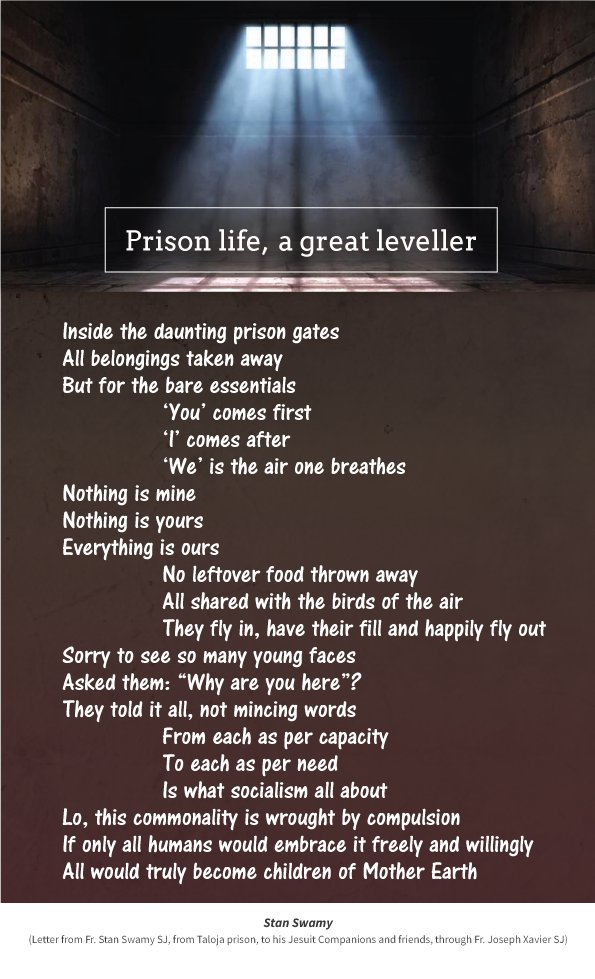 None would ever have imagined that an octogenarian Stan Swamy would face such a harsh treatment for his committed work for the Adivasis of Jharkhand. When the governments of the world over honor activists who work in tiring circumstances and devote their time to areas far away from their places than we must realise that it is not for money or fame but for pure committment and convictions. Father Stan Swamy was born in Trichy and as a Tamilian Christian he had enormous opportunities for him but he dedicated over thirty years of his life to the service of Adivasis in Jharkhand. He worked with Indian Social Institute in Banglore but he always felt the fragrance of the natural lives of Jharkhand. He decided to fully dedicate his life for the rights of Adivasis in Jharkhand.

People like me were just reading his articles on displacement and marginalisation of the Adivasis but never got an opportunity to meet him. It was in Aaugust 2017 that I got an opportunity to visit Jharkhand and interviewed a number of activists working for the Adivasi rights. My friend Vivek Sakpal too was with me and he contacted Father Stan Swamy for a conversation on the issues before Jharkhand. Prior to meeting him, I never knew he belonged to Tamilnadu. It need lot of strength and dedication to leave your place and work in entirely different area.

For me speaking to Mr Stan Swamy was a unique experience. He was polite and his voice was was soft and gentle. As I had not much information about his personal background, we focussed more on the issues concerning the Adivasis and most important was the ‘Land Bank” where government was trying to grab all the ‘unmeasuredland’, locally called as ‘Gairmajurva bhumi’. Basically, Adivasis have lived all through their lives in community and collective spirit. We are living as individual today which has resulted in government claiming all the land which is not really in the name of individuals and slowly most of the village’s collective and traditional lands which was the backbone of the indigenous communities was lost. Ways were ‘developed’ to hand these huge track of land to the companies to exploit the resources without consulting the communities or their representiatives. World over Adivasis or indgenous communities territorial rights have been respected and ‘consultation’ is essential to initiatve any developmental process in the region. Such kind of approach have well defined as Free Prior Informed Consent but it is this aspect hated by our leaders today. They dont want to consult any one and would only tell the people through their social media handle that the ‘laws’ are ‘good’ for people without ever attempting to listen to their concerns and voices.

A visit to Bagaicha, the place where Father Stan Swamy developed the institution for developmental students gives you feel how you approcah the people and it is particularly important who support the movements. He was a guiding force but never really attempted to become their ‘leader’. This is the most outstanding part of the missiuonary work which I have seen that peoplel dont have egos which most of us suffer because of our being ‘famous’. Working with communities sincerely and not expecting any return is the most heroic task that any one can do. Most of those who pretend to work in the villages, actually hijack the leadership of the communities and try to ‘lead’ them but Father Stan Swamy remain totally grounded, dedicated and never imposed himself on the people. It is the most difficult task. Having worked with communities means leaving from comfort zones of high publicity which we all have become habitual off, sitting close to internet connectivity.

Bagaicha looks a real tribute to the Adivasi struggle in Jharkhand. Names of martyors fot the cause of Adivasi Rights in Jharkhand have been written on the beautiful memorial. The statues of icons of Adivasi identity in Jharkhand look stunning and inspiring. It givse you a feel that you are amidst the place which has the fragrance of Adivasi land and its beautiful natural locale. Father Stan Swamy is a symbol of the selfless dedicated service by the Christian missionaries in different part of the country. Whether one call them ‘superstitious’ or ‘religious’ but the fact is that most of them leave their homes, go to interior regions and many time in deeply difficult circumstances. They focussed on community service and became part of the people and their culture. Unlike others who try to change people, their living pattern, these missionaries most of the time, embraced local traditions and spread education and human rights.

The contribution of Christian missionaries to better the lives of Adivasis in former South Bihar and today’s Jharkhand is enormous. At the time when Adivasi students would be unwelcome in big schools, it is the missionaries who provided many of them, good education and help build a leadership which can speak on its own. Building up institutions is not an easy task and activists can learn a few lessons from the Christian Institutions that despite all adversity they worked and reached to the most marginalised communities.

During the conversation, I had raised the issue whether he received any threat or intimidation particularly related to ‘conversion’ issue, often accused by the Hindutva protogonists. He was polite yet firm that so far he had no cases and he is ready to fight them democratically whenever such things come to him. It is sad that such a humble man with enoromous background of social service and no criminal background, is now languishing in jail. Right now, I cant speak anything about pending cases but I hope justice will be done. Democracy can not be brutal in treating its older people. How can such a man be a ‘threat’ to society or nation ?

I would have loved to explore more of his ideas but realised that he does not speak too much and careful of not taking the ‘lead’ position yet this conversation will give you his ideas and conviction on the issue of Adivasi identity and their land rights. We wish him good health and justice in the coming days. India need to stand with such selfless people who spread love and communal harmony amidst its population, who dedicated their lives for the rights of the marginalised. Even when I am a humanist, I would say that the life of Christ is revisited here. He was crucified for doing good to people. Probably, doing good is the bad things these days. I avoid speaking in terms of ‘constitutionalism’ becauses despite all our strength our judiciary has disappointed us. The year 2020 has been very depressing and we can only hope that things will improve. I dont want to be hopeless not to hope in these difficult circumstances. The only way is to spread love, speak the truth, strengthen freternity and have faith in the Constitution. Hope one day, we all will realise that the best way to move ahead is to respect those who have served people tirelessly and selflessly. Societies which dont respect those who work for people selflessly never grow and strengthen. A nation is not merely a rule book and constitution but powerful autonomous institutions who can stand with people’s right. It is also a relationship between its citizens and respecting their rights to be different. Let us rebuild our nation together.

Merry Christmas to all.

Holding power to account- RTI Act
Why The Hindu American Foundation Does Not Speak For Me
Death by a thousand cuts
#India - 500 Nagpur Jail undertrials, denied bail seek NHRC intervention